How to identify a stamp by its watermark

Figure 2. With the stamp face down in the watermark tray, watermark fluid is applied to the back. Only a few drops of fluid are needed to render the watermark visible. 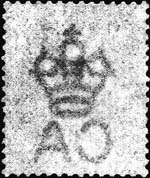 Figure 1. Some stamps, but not all, have watermarks in the stamp paper. The design can be seen when saturated with watermark fluid.
Previous
Next

Every stamp has characteristics that can be used to identify it. In most cases, the design of the stamp is the most prominent identifying feature.

Even stamps that have identical designs may be different, however. In such cases, a distinguishing secondary characteristic must be used to tell the stamps apart.

The difference between two otherwise identical stamps can sometimes be found in the watermark.

This thin area is usually difficult or impossible to see on the stamp under normal conditions, but it can be viewed with the use of a watermark detector.

An example of a well-known watermark is shown from the back of a stamp in Figure 1. The crown insignia and letters "CA" (which appear reversed when viewed on the stamp) are found on many British colonial stamps printed by De La Rue & Co. during the early part of this century.

Not all stamps have watermarks. Many foreign stamps do, but most U.S. stamps manufactured in this century do not.

Identical stamps that have different watermarks are considered different stamps. For that reason, collectors must be able to see and identify the watermarks on the stamps they collect.

The most common method of watermark identification is shown in Figure 2.

The process is simple, involving a black watermark tray made of molded plastic or ceramic, and specially formulated watermark fluid.

The stamp is positioned face down in the tray and a few drops of watermark fluid are placed on the back.

Almost instantly, the watermark on the stamp becomes visible, in the form of a dark pattern within the lighter color of the paper.

The fluid evaporates quickly, leaving no change to the condition of the stamp.

This procedure can be followed with used stamps as well as with mint stamps with full gum. Though the stamp will appear to be completely dampened with the watermark fluid, the gum on the stamp will be unaffected by the process and will be intact after the watermark detection process is complete.

Because the fluid evaporates quickly, bottles and containers of watermark fluid should be tightly capped whenever they are not in use.

On some stamps the watermark is particularly strong and can be seen simply by holding the stamp to a light and viewing the back, or by placing the stamp face down on a plain black surface, like the back of a black stock page.

On other stamps, the watermark may be nearly impossible to detect, even using watermark fluid.

Watermarks on stamps printed in yellow and orange can be particularly difficult to see, but there are ways to enhance the appearance of the watermark.

Ken Lawrence is a stamp expertizer for the American Philatelic Expertizing Service. He recommends the use of a transparent colored filter made of plastic or gelatin to view these elusive watermarks.

With the saturated stamp face down in the watermark tray and under a direct light, the collector views the watermark while looking through a filter with a color similar to that of the stamp design.

Such filters are available from scientific supply houses and some camera stores.

In comprehensive stamp catalogs, watermark patterns are listed and illustrated, to further help the collector identify the stamp in question.

The Scott Standard Postage Stamp Catalogue publishes most of the pertinent watermark illustrations near the beginning of each country listing for many issues. Because they are used by many different countries, British Colonial and Crown Agents watermarks are listed in one section near the back of each volume of the catalog.

Figure 3 shows an example of how watermarks affect the identification of a stamp.

The stamp shown at top left in Figure 3 is an issue from Germany that was produced during that country's period of hyperinflation that followed the end of World War I.

The value of the stamp changes substantially, depending upon which variety you find.

The 1998 Scott catalog listing for the stamp appears in Figure 3, with the two appropriate lines marked by small arrows at left.

As you can see, the watermark patterns are similar diamond shapes, but the diamonds are separate from one another in the Lozenge pattern and interconnected in the Network pattern.

Tiny details like these can make a substantial difference in the catalog value of the stamp and can help to identify like stamps that are saved in different locations of the stamp album.

The cost of a watermark tray runs from about $1 to $5 for plastic versions, a little more for ceramic trays.

A 4-ounce bottle of watermark fluid usually sells for $7-$12 but should last a long time for the average collector.

As with any chemical solvent, watermark fluid must be handled with care. The chemical vapors may be harmful, and the fluid should always be used with adequate ventilation. Contact with skin or eyes should be avoided.

Some collectors have used lighter fuel, a flammable product that uses the chemical naphtha, for watermark detection.

The benefit is that the lighter fuel is less expensive.

There are several drawbacks. Lighter fuel may leave a filmy residue on stamps. The smell is awful. The chemical is highly flammable.

Though inexpensive, lighter fuel is not designed for detecting watermarks on stamps and is not recommended for that purpose.