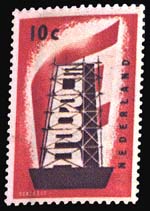 Figure 4. The first Europa stamps in 1956 were similar in design to this issue from the Netherlands, Scott 368.

Joint issues were the topic of last week's Refresher Course column. A joint issue occurs when two or more nations agree to issue stamps at the same time to recognize a single subject.

The first official U.S. joint issue occurred in 1959, when the United States and Canada both issued stamps to celebrate the opening of the St. Lawrence Seaway. United States Scott 1131 was a 4¢ stamp and Canada Scott 387 was a 5¢ stamp, but the two had very similar designs.

The idea of similar stamps from different stamp-issuing entities goes back to the early days of the postage stamp, when Queen Victoria ruled Great Britain and its many colonies around the world.

In the 1880s, for example, Great Britain issued numerous stamps depicting the queen on behalf of its overseas colonies. Two examples, Cyprus Scott 25 and Montserrat Scott 3, are shown together in Figure 1.

Obviously the stamps in the illustration are nearly identical. They are printed in different colors and have different colony names and denominations printed upon them, but they share the same design.

These stamps are known as key types. The vignette (central design), borders and ornaments are printed by a single printing plate known as a key plate. The area for the colony name and denomination are blank.

A second plate known as the duty plate adds the name and value information in the blank spaces.

Many definitive stamps from British colonies have been printed as key types. Some depict more recent British monarchs, including Queen Elizabeth II.

Other countries made use of key types of various designs for their colonial holdings, including Germany, France and Portugal.

In 1898 Portugal and its colonies took this common design theme one step further by issuing what is considered by many to be the world's first omnibus stamp issue.

Each stamp was inscribed with the name of the issuing colony. Figure 2 shows the 75-reis value from the set as issued by Portugal (left, Scott 152) and Madeira (right, Scott 42).

The omnibus idea didn't really catch on until many years later, when France and Great Britain released commemorative issues during the 1930s on behalf of their many colonies.

The French colonial exposition issue of 1931 is a set of four stamps with common designs that was issued by 26 colonies. The complete omnibus set of this issue, therefore, consists of 104 different stamps.

The King George V Silver Jubilee issue of 1935 from Great Britain and its colonies consists of 249 stamps from 59 entities, according to the 1999 Scott Standard Postage Stamp Catalogue.

The Scott catalog lists numerous stamps with common designs near the beginning of each volume, under the heading "Common Design Types."

Members of the British Commonwealth of Nations continue to issue omnibus sets on a fairly regular basis. In 1996 a group of 10 nations united to issue similar stamps marking the 70th birthday of Britain's Queen Elizabeth II.

Each participating country actually issued either four or five stamps for the event, for a total of 46 stamps in the omnibus set.

The first common-design listings a collector encounters in the Scott catalog usually are for Europa issues.

In 1951 six nations known collectively as the European Coal and Steel Community agreed to a free market concept known as the Schuman plan. This economic alliance between Belgium, France, Germany, Italy, Luxembourg and the Netherlands led to the formal establishment of the European Economic Community in 1957.

The six nations released the first Europa stamps in 1956 to symbolize their cooperation. The designs of the stamps were all similar to the 10¢ issue from the Netherlands, Scott 368, shown in Figure 4.

Eighteen nations participated in the 1960 release.

For many years the Europa stamps all shared common designs. In 1974 the various nations participating began to issue Europa stamps with different designs on the same theme.

That tradition continues to this day, as evidenced by the three stamps shown in Figure 5. From left to right are the 1998 Europa issues of Germany, Faeroe Islands and San Marino.

Each stamp has a very different design, but they all celebrate the 1998 Europa theme of national holidays and festivals.

Notice that each stamp includes the word "Europa" in stylized lettering somewhere in the design.

Many collectors who are interested in the Europa topic are members of the Europa Study Unit, a chapter of the American Philatelic Society.

According to its journal Europa News, the group "is an association of philatelists devoted to the study of philatelic materials covering the idea of a united Europe . . . Europe united in a political, economic and social sense."

The journal is issued to members six times per year. Membership information is available from Hank Klos, Box 611, Bensenville, IL 60106. An addressed, stamped envelope should accompany requests for information.