Figure 6. An inverted overprint is one type of error. A few of Greenland's 1996 surcharged stamps (left) were found with the overprint printed upside down. 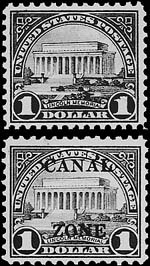 Figure 2. Numerous U.S. stamps were overprinted for use in the Canal Zone. Shown is the 1922 $1 Lincoln Memorial issue (top) and an overprinted example.
Previous
Next

When a new postage stamp is needed in a hurry, postal authorities sometimes alter an existing stamp to suit their needs.

This is commonly done by applying an overprint.

An overprint is any printed marking or text (other than a postal cancellation) that is applied by postal authorities to unused postage stamps with the intention of modifying the original.

The two stamps shown in Figure 1 illustrate a typical surcharge.

In 1979 the island nation of Barbados issued a set of definitive stamps showing birds. The 28¢ stamp at left in Figure 1 depicts a blackbird and is cataloged as Barbados Scott 503.

Nearly three years later the same stamp was overprinted (or surcharged) with a new denomination of 15¢. The new surcharged stamp, Scott 570, is shown at right in Figure 1.

Stamps overprinted with surcharges to fulfill a sudden need for a new postage denomination are also known as provisional issues.

Some stamps are overprinted to reduce waste by giving new life to stocks of otherwise obsolete issues.

Some stamp collectors have complained that certain countries surcharge or overprint stamps simply to sell additional issues to collectors, but often there is a genuine postal need for the overprinted stamp.

Note that the surcharge on the Barbados stamp in Figure 1 is less than the original value.

Overprints are often simple in design and easy to counterfeit. Most postal authorities choose to surcharge stamps by overprinting a high-value stamp with a lesser value to discourage counterfeiters from creating fake overprints that illegally increase the face value of the stamp.

There are, however, many surcharged stamps that properly increase the face value of the stamp.

Many of these overprints were created during the 1920s, when rampant economic inflation took its toll on some European nations.

As an example, Germany surcharged dozens of stamps in 1923 with ever increasing values as inflation overwhelmed the country and postage rates skyrocketed.

As an example, stamps originally printed with a 30-pfennig denomination were surcharged to be 8,000 marks.

Because overprints can be easy to duplicate or alter, collectors should use caution when purchasing overprinted stamps of great value. Such items should be authenticated by an expert to verify that they are genuine.

Envelopes and postal cards are also known with surcharges. The United States began surcharging stocks of 3¢ envelopes in 1920 to meet reduced postage rates that went into effect the year before. U.S. postal cards were also surcharged in 1920, changing their value from 2¢ to 1¢.

Another common use of overprints is to authorize the use of postage stamps originally printed for use in another area, region or country.

During the period 1904-79, the Canal Zone was under the jurisdiction of the United States government, but mail from that region was sent using stamps bearing a Canal Zone inscription.

On several occasions, U.S. stamps were overprinted for use in the Canal Zone.

The top illustration in Figure 2 shows the $1 Lincoln Memorial definitive stamp, Scott 571, from the 1922 fourth Bureau issue. Below it is the overprinted stamp created for use in the Canal Zone. The latter stamp is cataloged as Canal Zone Scott 95.

This overprinting technique has also been used when one country maintains post offices within another country.

An example are Germany's stamps for its post offices in China from 1898 to 1913. The name "China" is overprinted on numerous German stamps of that period.

Overprinted country names can also proclaim new independence (such as the Estonian issues of 1919), or reflect military occupation (such as Germany's stamps for its 1940 occupation of Alsace and Lorraine in France).

Overprints are regularly used to designate a new function for a previously issued stamp. Most often, this change is reflected by the imprint of a single word.

Figure 3 shows two stamps from Tanzania issued during December 1973. At left is the 40¢ definitive postage stamp (Scott 40) and at right is the same stamp overprinted for Official use by government departments (Scott O20).

The Refresher Course column published in the March 1 issue of Linn's Stamp Newsdescribed the function of Official stamps.

Overprints that name service designations sometimes can be difficult to interpret.

Parcel post stamps of Belgium overprinted "JOURNAUX DAGBLADEN" are intended for use as newspaper stamps.

Regular postage stamps of Spain from 1909-10 overprinted "CORREO AEREO" were used as airmail issues in 1920.

There are many other examples of how overprints can change the intended purpose of a stamp's use.

Some countries have used overprints to commemorate a recent event when there may not be time to create a new postage stamp.

In such cases, existing postage stamps are marked with a message that announces the new subject.

Cayman Islands used this method in 1984 to note the meeting of the Universal Postal Union Congress in Hamburg, Germany.

At left in Figure 4 is the 50¢ Lloyd's List stamp released May 16, 1984, and cataloged as Scott 525. The overprinted issue at right appeared one month later and is listed as Scott 527.

Collectors of United States stamps will recall that this method was used in 1928 to remember Molly Pitcher on the 150th anniversary of the Battle of Monmouth. U.S. Scott 646 is a 2¢ carmine George Washington regular-issue stamp with the words "MOLLY PITCHER" overprinted in black.

Some collectors consider U.S. precanceled stamps to be a form of overprinting, while others argue that it is actually a form of cancellation and therefore not properly an overprint.

Figure 5 shows U.S. Scott 1054A, the 1960 1¼¢ Palace of the Governors coil stamp in unprecanceled form at top, and bearing a Grand Rapids, Mich., precancel at bottom.

The precancel is applied either by a local post office or by the stamp printer. Stamps with a precancel are intended for use by volume mailers. With precancels, a post office can avoid passing large quantities of mail through canceling machinery.

Some are scarce and can be quite costly. In 1996 Greenland surcharged its 0.25-kroner Queen Margrethe II issue with a new value of 4.25kr.

Just a few of the stamps were accidentally overprinted with the surcharge upside down, as shown at right in Figure 6.

The stamp with the inverted surcharge is a highly prized error that many collectors seek.

Some similar overprint errors from other countries are quite common and are not particularly valuable.

Another type of overprint error is the omitted overprint. In many cases, this can only be verified if the error stamp is attached to a properly overprinted example.

In some cases, though, the stamp is only known in its overprinted form. When the overprint is omitted, the error can be verified because no stamps without the overprint were regularly issued.

The 1922 inflation issues of Germany again provide an example. Three of the surcharged stamps issued with roulette separations were never issued without an overprint, so examples of the overprint-omitted error of these otherwise common stamps sell for hundreds of dollars.

There are numerous other examples of how overprints are used by postal authorities to alter postage stamps, and varieties of overprints can make an interesting collecting specialty.

Details about many overprints and overprinted stamps can be found in the Scott Standard Postage Stamp Catalogue or in specialized catalogs for specific countries.