There's a stamp catalog that's right for you 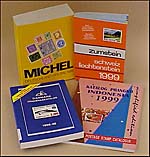 Figure 5. Specialized catalogs for other countries often are available from dealers in philatelic literature. 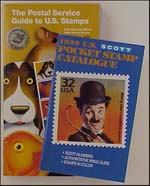 Figure 2. Pocket catalogs provide the most basic details about the listed stamps. 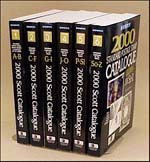 Figure 1. It takes six volumes to list and describe all the postage stamps that have ever been issued. Shown is the 2000 Scott Standard Postage Stamp Catalogue.
Previous
Next

It may be hard to comprehend, but stamp catalogs exist that identify nearly every postage stamp ever created in the entire world.

There have been so many stamps issued throughout history that to list them all and show images of representative stamps, the Scott Standard Postage Stamp Catalogue, shown in Figure 1, is published in six volumes.

Scott catalogs are researched and compiled by Scott Publishing Co., a division of Amos Press of Sidney, Ohio.

Each volume of the Scott catalog contains comprehensive stamp listings for countries arranged in alphabetical order by country name.

The stamps of the United States are listed first in Vol. 1, followed by all the countries of the world beginning with the letters A and B.

Each stamp in the Scott standard catalog is listed with useful information, such as the issue date, the process used to print the stamp, the perforation gauge (a measurement of how close together the perforation holes are), and an individual Scott catalog number.

The Scott number is used by many collectors and dealers to identify any specific stamp.

For example, a collector who refers to Mexico Scott 1713 is describing a 1,000-peso stamp issued by Mexico Dec. 5, 1991, to commemorate the death bicentennial of Austrian composer Wolfgang Amadeus Mozart.

The standard postage stamp catalog provides values for most of the stamps that are listed, both in unused condition and postally used.

These values approximate what a retail stamp dealer would charge a customer who wanted to purchase any specific single stamp or set.

For each individual stamp or stamp set listing, at least one stamp is shown in black-and-white to illustrate the basic design. Often the catalog also provides a brief bit of information about the stamp subject, telling why the stamp was issued.

There are different worldwide catalogs published in other countries. Many of these catalogs use their own numbering systems.

A collector with an interest in just one country or region may prefer a stamp catalog that describes only the stamps in the specific collecting area.

For beginner collectors, a pocket catalog that simply identifies each stamp and lists them in chronological order may be all that is needed.

Both of these catalogs use Scott catalog numbers to identify the listed stamps.

Pocket catalogs generally provide a limited amount of information. The illustrations and listings simply help the collector determine which stamps are needed to fill out the collection. When the collector wants to learn more about his stamps, he can turn to a specialized stamp catalog.

The 2000 Scott Specialized Catalogue of United States Stamps and Covers is shown in Figure 3.

Collectors of U.S. stamps find substantially more information in the specialized catalog than is available in any pocket or standard catalog.

The descriptions shown in Figure 4 may help to explain how the listings differ in the pocket, standard and specialized catalogs.

All three listings in the example are for the 32¢ James Dean commemorative stamp issued by the United States in 1996, Scott 3082.

All three catalogs include an illustration of the stamp design.

The pocket catalog listing, shown at top in Figure 4, identifies the stamp by Scott catalog number, denomination and issue name, and it gives values for a single stamp in unused and postally used condition.

Also listed is an error variety, Scott 3082a: an imperforate pair of the James Dean stamp.

The description in the center of Figure 4, from Vol. 1 of the 2000 Scott standard catalog, has all of the pocket catalog information, as well as the exact date of issue, printing method ("photo.", short for "photogravure or gravure"), perforation gauge ("11.1"), and a second error listing (Scott 3082b) for an imperforate pair with the red color in "USA 32" missing from the design.

At the bottom of Figure 4 is the listing for the Dean stamp from the Scott U.S. specialized catalog.

Still more information is included: the name of the designer and the printing firm, listings and values for the uncut press sheet of 120 stamps and position pieces, descriptions of the issue's star-shaped perforations, and a reference to a listing found later in the catalog for a vending booklet that was issued containing the James Dean stamp.

The specialized catalog also contains many listings that aren't found in standard catalogs. Among these are descriptions of U.S. proofs and essays (test printings and artwork created before the stamps are printed); expanded revenue stamp listings; first-day-cover listings, including information about official first-day cities; detailed specialized listings for booklet stamps; and much more.

Collectors of United States stamps can even find stamp catalogs on compact discs (CD-ROM) that are read by computer. Similar discs are available for stamps of some other countries as well.

Figure 5 shows four such catalogs. Clockwise from top left are the Michel specialized Germany catalog, the Zumstein catalog of Switzerland and Liechtenstein, the Prangko catalog for Indonesia and the AFA catalog for Denmark.

Each catalog presents more information than the collector is likely to find in the general worldwide catalog, but most foreign catalogs are written in the language of the country of origin.

Stamp catalogs are sold by dealers in philatelic literature, many of whom advertise in Linn's Stamp News.

They are also available from stamp dealers or directly from the publisher.