It may be small, but it has a lot of parts 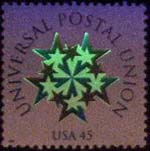 Figure 2. Luminescent material on the 45¢ Universal Postal Union stamp from the United States is applied in the shape of the central design.

Figure 1. The watermark on a stamp is a characteristic of the stamp paper and serves as a security device.
Previous
Next

For an object that's often less than one-inch square and just barely three-dimensional, it's surprising how many different parts a postage stamp has.

What's more, every part is important, both in assessing the condition of the stamp and in its identification.

For that reason, stamp collectors recognize that each component of the postage stamp bears examination.

Paper. With only a few exceptions, postage stamps have overwhelmingly been printed on paper.

Because stamps are small, faults in stamp paper are quite obvious when examined closely. Faults such as creases, tears and cuts greatly reduce the value of collectible stamps. Collectors should always take steps to prevent their stamps from becoming damaged.

Paper is an important element in identification for many older stamps.

For example, several stamps of the 1908-09 United States definitive series were printed in limited numbers on what is known as "China clay" paper, which contained a higher mineral content than the standard paper used for this issue and therefore appears thicker and darker.

Because very few stamps were printed on this special paper, those that can be identified are more valuable than the regular issue.

Watermarks. One component of stamp paper is the watermark: lettering or designs that are specially formed within the paper as a security device.

You may have seen watermarks on fine stationery and envelopes. When you hold the paper up to the light, you can read the manufacturer's name or see a design.

Some postage stamps have watermarks within the stamp paper, but because the stamp design is printed on one side of the paper, the watermark is often nearly impossible to see unaided.

Collectors use a special watermark fluid to view the watermark as it appears on the unprinted back of the stamp.

Figure 1 shows a watermark pattern of stars on a 1960 Italian commemorative.

Some stamps that are otherwise alike can be identified as individual issues because they have different watermarks, or because one is watermarked while the other is not.

The United States used watermarked paper for postage stamps from 1895 to 1916. Many other countries continue to use watermarked stamp paper today.

Design. Stamp designs generally are the most easily distinguished feature of a stamp. It's easy to tell apart two stamps with different designs, but there are times when very small variations in the design determine that two stamps are different from one another.

Although at first glance several of the stamps appear identical, closer examination shows the clapper of the bell in the design is either at left (first set), at right (second set), or hanging straight down (third set).

Design variations can also be unintentional or the result of repairs or changes made to printing plates.

Specialists who collect the U.S. Washington-Franklin definitive series of 1908-21 encounter several different design types for otherwise identical stamps, the only differences being small variations in engraved lines or added shading.

Evidence of printing plate cracks that can be seen on the issued stamps distinguish collectible varieties in the same series as well.

Color. The color on a stamp is another variable that may cause one stamp to look different from a nearly identical issue.

Many 19th-century U.S. stamps are listed in stamp catalogs with several different color descriptions. The 5¢ Benjamin Franklin issue of 1847 is listed with shades of red-brown (Scott 1), dark brown (1a), orange-brown (1b) and red-orange (1c). Each shade has a different catalog value.

Subvarieties of the red-brown shade (pale brown and brown) are also listed.

Some color varieties may be rare errors that greatly increase the value of a stamp.

This occurs when a stamp is accidentally printed using the wrong color or with one color missing or inverted (printed upside down).

Some of these errors have values considerably less than $100, while a few sell for many thousands of dollars. The difference almost always relates to the number of error stamps that are discovered.

Sometimes what appears to be a color error may simply be a poor alignment of colors on a multicolor stamp. That means the different printing plates were not properly aligned, creating an improperly printed image that a collector may mistakenly identify as an error. In most cases, such stamps are simply poorly printed versions of a normal issue.

Some color varieties are the result of damage or tampering. Long exposure to light, such as room light or sunlight, or chemical solvents, can alter the appearance of many printing inks. On postage stamps, this can make a very startling difference from the norm.

While such stamps are interesting to look at, they are generally considered damaged stamps and have less value than regular issues.

Sometimes it can be difficult to tell a true color variety from a damaged or altered stamp. When in doubt the collector should consult a knowledgeable stamp dealer, specialist or expertizer.

Luminescence. Many postal authorities around the world, including the United States, add luminescent material to postage stamps they print. Letter-sorting machinery detects the presence of the luminescent material (also known as "tagging") on mail bearing such stamps, orients the envelopes into their proper position and automatically postmarks the stamps.

Collectors can detect the presence of tagging by exposing the stamp to ultraviolet light in a darkened room.

On many stamps the entire design is entirely covered with luminescent material, although a few recent U.S. stamps have had cut-to-shape blocks of luminescent phosphor taggant applied to specifically fit the central design.

The 45¢ Universal Postal Union stamp issued Aug. 25 is one such stamp. It is shown in Figure 2 photographed under shortwave ultraviolet light.

Some stamps have been printed both with luminescent material present and with it missing, either intentionally or unintentionally. The varieties are often listed in specialized catalogs.

Separations. The term "separations" refers to the way postage stamps are separated from one another.

Two of the most common separations are perforation and die cutting.

Perforated stamps have small holes surrounding the central design. Tearing along the line of holes separates the stamps from one another.

Some stamps can be found with holes that are closer together or farther apart than similar examples with the same design.

The measurement of this spacing, known as the perforation gauge, is another factor that in some cases distinguishes otherwise identical stamps.

Self-adhesive stamps are separated from one another by die cutting. Often these cuts are shaped to resemble the edge of separated perforated stamps.

Figure 3 shows three nondenominated H-rate (33¢) Hat stamps of 1998. All three stamps have similar designs, but the stamp on the left is perforated, while stamps at center and right have two different types of die cut. The differences between all three are relatively easy to see.

Stamps with missing separations that are supposed to have perforations or die cuts may be production errors that have a premium value.

Gum. There are two basic varieties of stamp gum, usually identified as self-adhesive (or pressure-sensitive) and water-activated (or lick-and-stick).

Specialist collectors can identify varieties among many of the water-activated gums, noting that some are shiny, some appear dry, and so on.

Collectors often check the condition of a stamp's gum, just as they check other characteristics of the stamp, to make sure there is no damage or alteration.

Believe it or not, stamps have many other attributes, such as overprints (lettering or a design added to a finished stamp), grills (impressed patterns), and even size.

These different characteristics all point to one important fact: postage stamps are always worth a closer look.