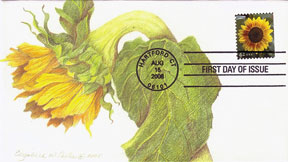 Figure 4. Se-tenant stamps are sometimes found used on cover. The envelope shown here was sent from Denmark to the United States in 1978. The five stamps at left are all se-tenant, from a booklet sold by machine beginning in November 1977.

Figure 3. Three se-tenant postage stamps completing a single continuous design are referred to as a triptych. 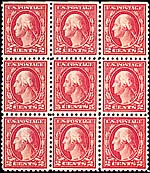 Figure 2. The stamp in the center of this block is a 5¢ carmine error of color. It is se-tenant with the remaining 2¢ stamps.

Figure 1. The 1978 13¢ Capt. James Cook issue can be collected as a se-tenant pair, where two different stamps are attached. Each Cook pane of 50 included five se-tenant pairs.
Previous
Next

A special term describes stamps that are attached to one another, but bear different designs. The word "se-tenant" translates from French as meaning "holding together." The French pronunciation of the word is "say-tah-NON," but American collectors often pronounce it "say-TEN-ent."

One example of a se-tenant pair from the United States is shown in Figure 1. The 13¢ Capt. James Cook issue of 1978 consisted of two designs printed together on a single pane of 50 stamps: five rows down and 10 across. The stamps on the left half of the pane (five rows down and five stamps across) all show a portrait of Cook (Scott 1732). Each stamp on the right half shows the ships Discovery and Resolution(1733).

Up and down the center of each Capt. Cook pane were five se-tenant pairs of stamps such as the example shown in Figure 1. Many collectors chose to save a pair. In the Scott catalog, the attached pair of Capt. Cook stamps is specifically identified as Scott 1733b.

In the early years of stamp production, the stamps in a given printing were all the same design. For example, every stamp of the Penny Black issue of 1840 (Great Britain Scott 1) shows a portrait of Queen Victoria with the inscriptions "POSTAGE" and "ONE PENNY." The Penny Black is acknowledged as the world's first adhesive postage stamp.

Yet, in the left and right lower corners of each Penny Black stamp there appear two very small letters that identify the position where the stamp appeared on the sheet. Therefore, any Penny Black stamp attached to another can be considered se-tenant because these plate-position letter combinations are different for each stamp on the sheet.

While the distinguishing differences on the Penny Blacks are intentional, other early se-tenant stamps were created unintentionally. In 1851 Spain produced a sheet of 170 6-real blue stamps featuring a portrait of Queen Isabella II. As described in the Linn's book Philatelic Gems, a single 2r cliche (a metal unit with a single stamp design used to construct a form to make a plate) was accidentally inserted in the form for the 6r stamp.

When the stamps were printed from the resulting plate, one stamp on each sheet was inscribed "DOS REALES" rather than the correct "SEIS REALES." The 2r blue stamp is considered an error of color because the 2r stamp was normally printed in red. At least one example has survived that shows the 6r stamp se-tenant with the 2r error from the same sheet.

A few similar examples are known among United States stamps. Figure 2 shows a block of nine stamps from the 1916 George Washington issue. The stamps shown are all carmine red. If you look closely at the illustration, you'll see that all of the stamps have 2¢ denominations, with the exception of the center stamp, which is 5¢. Once again, the 5¢ stamp is considered an error of color because the proper color for the 5¢ stamp of this issue was blue.

As one of the steel printing plates was being manufactured for the 2¢ issue, for some reason it became necessary to re-enter three subjects (individual stamp designs) on the plate. An impressing device called a transfer roll, which bore the design of the 5¢ stamp, was used to place the design on the plate, instead of the proper transfer roll with the 2¢ design.

Apparently no one noticed the difference because the stamp designs were so similar, so sheets of 400 stamps were printed with three stamps bearing the wrong denomination. Collectors save this interesting error with examples of the proper stamp attached, to illustrate the se-tenant nature of the issue. The 2¢ stamp is Scott 463 and the 5¢ carmine error of color is Scott 467.

The block of nine shown in the illustration is listed in the 2000 Scott Specialized Catalogue of United States Stamps & Covers with a value of $900 unused or $1,350 never-hinged.

In 1936 the United States issued an imperforate four-stamp souvenir sheet commemorating the Third International Philatelic Exhibition (778). The sheet reproduced the designs of four different stamps that had been issued between April 1935 and March 1936. Similar imperforate souvenir sheets were issued in 1947 (948) and 1956 (1075).

Stamps with attached labels are also considered to be se-tenant with the label, and they are normally saved in that form by collectors whenever possible. Most of Belgium's stamps issued from 1893 through 1913 were printed with a detachable label at the bottom of the stamp that requested no delivery of the mail on Sunday.

Other nations have included advertising labels se-tenant with booklet stamps. Examples include the booklet issues of Denmark from 1927 to 1934, with labels promoting automobiles, magazines, soap and other items, attached to common letter-rate stamps.

In 1962 the United States began to issue 5¢ George Washington booklet stamps with se-tenant slogan labels (1213a) promoting proper use of ZIP codes and offering other mailing suggestions.

Beginning in 1926 the stamps of South Africa were printed alternately with English and Afrikaans inscriptions in the same sheet. Most collectors of South Africa's stamps from this period look for se-tenant pairs of stamps that show one of each type.

Se-tenant stamps began as issues of separate designs that were simply attached to one another, but as the concept became more popular, postal administrations looked for ways to make the stamps part of a larger continuous design.

A se-tenant pair of 5¢ United States stamps shows a space-walking astronaut on one stamp (1331) and the Gemini 4 space capsule on the other (1332), but the pair together shows those elements as a single outer-space scene (1332b).

The 1972 Cape Hatteras National Park issue (1448-51) consists of four 2¢ stamps in a se-tenant block that together creates one seashore scene. A single scene made up of four se-tenant stamps is called a quadripartition.

When three stamps make up the scene, the issue is called a triptych (pronounced "TRIP-tik"). The U.S. 13¢ Spirit of '76 stamps from 1976 recreated Archibald M. Willard's well-known portrait of a fife and drum trio as three se-tenant stamps (1629-31) to commemorate the U.S. bicentennial. This triptych is shown in Figure 3.

The cover shown in Figure 4 bears seven stamps from Denmark, on an envelope mailed from Copenhagen to the United States in 1978. The first five stamps from left to right are all attached; only the two 20-ore stamps in positions 3 and 4 are alike. Together the five stamps form the first pane of Denmark's machine-vended se-tenant definitive booklet stamps, issued in 1977 (544a).

Like most booklet stamps with varying denominations, this example was created to offer a variety of stamps at a nice round rate that can be easily paid into a machine. In this case, the five stamps cost an even 2 kroner.

Se-tenant stamps have been issued in many forms by countries around the world. Every variety provides collectors with a great number of different ways to collect and enjoy their stamps.