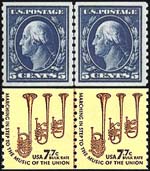 Figure 5. Many specialty collectors of coil stamps place a premium on coil pairs that have guidelines (top, on Scott 447, the 5¢ blue Washington of 1914) or joint lines (bottom, on Scott 1614, the 7.7¢ Saxhorns issue of 1976) printed between the two stamps. Although they look very similar, guidelines and joint lines are created by two very different circumstances.

Figure 4. The first U.S. government-issued coils were assembled by hand from sheets of stamps. Shown is a pair of 1¢ green Franklin stamps from 1908, Scott 316, sold at auction in 1998 by Siegel Auction Galleries.

Figure 3. Early U.S. coil stamps were created from imperforate stamps supplied to mailers by the United States Post Office Department. Shown is a horizontal pair of the imperforate 4¢ brown Grant issue, Scott 314A, with holes added privately by the Schermack Mailing Machine Co. of Detroit. 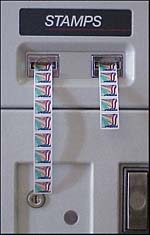 Coil stamps serve a number of specific duties for postal customers, but they are also of special interest to many stamp collectors around the world. Coil stamps are processed and issued as long single rows of stamps, usually 100 or more, that are wound into a roll.

Figure 1 shows four current United States issues in four different coil roll sizes, stacked one upon another in full rolls. The top roll contains 100 of the self-adhesive 20¢ Pheasant coil stamp of 1998, Scott 3055. Below it is the 20¢ Cog Railway coil originally issued in 1995, Scott 2463, in a roll of 500.

Individuals may go to the post office and buy full rolls of coil stamps in selected denominations, such as postcard or letter-rate values, but other coil stamps or roll sizes may be available only by special order.

One of the more common uses for coil stamps is for dispensing from vending machines in post office lobbies and elsewhere, as shown in Figure 2.

The need for stamps that would fulfill these vending and affixing requirements led to the development of coil stamps at the beginning of the 20th century.

Worldwide industrial development in the latter half of the 19th century included the development of numerous mechanical devices designed to accomplish tasks previously performed by hand.

In 1905, New Zealand began trials of stamp vending machines known as "Penny-in-the-slot" machines (or simply slot machines) at the post office in Wellington. In the 1965 Catalogue of New Zealand Stamps, Campbell Paterson wrote, "The [slot machine] issues have a proud place in New Zealand philately, being evidence of the invention by New Zealanders of a device now in use in all parts of the world." The stamps initially used in these devices were the 1-penny carmine Commerce issue of 1901.

However, Hans Jaffe and R.E. Kuntz, in Coils A Worldwide Catalog reported the existence of coil stamps as early as 1903 for the Netherlands, which Burton E. Bauder affirms in his Poko Issue of The Netherlands.

"Printing stamps in coils was proposed by the Englishman Mr. Benjamin Cleverton as early as 1839," Bauder writes, "but the first trials in Holland date from 1903. In that year a vending machine for both 2½ and 5 cents stamps was installed in the main PO in the Hague. Rolls made from the normal sheets were too weak and a special printing of the 2½ cent stamps on the paper for the recess printing stamps was made." All attempts failed, Bauder reports, though more successful trials began anew in 1908.

In the United States, the manufacturers of stamp affixing machinery were encountering difficulties similar to the Dutch innovators. Richard McP. Cabeen writes in the Standard Handbook of Stamp Collecting that soon after 1900, U.S. vending machine manufacturers created coils by pasting together strips of perforated sheet stamps, but "they were so weak at the perforations that they tore apart and clogged the machines."

In 1906 the U.S. government responded to requests from these manufacturers by providing imperforate sheets of 400 stamps that the manufacturers could then perforate in whatever manner would best work in their specific vending machinery.

Some of these privately perforated coil stamps are fairly common, while others are remarkably scarce. One of the earliest and most valuable of these is the 4¢ brown Grant issue, Scott 314A, issued imperforate in 1908, although all stamps were perforated with oblong holes by the Schermack Mailing Machine Co. in Detroit.

The unused pair shown in Figure 3 was sold for $105,000 plus a 10 percent buyer's premium by Robert A. Siegel Auction Galleries during the October 1998 sale of the Zoellner collection.

The government created its first coils by pasting together strips cut from sheets of 400 perforated horizontally only, Max G. Johl reports in The United States Postage Stamps of the 20th Century. The sheets were divided into vertical strips of 20 and pasted together to form rolls of 500 and 1,000 stamps.

The first attempt at U.S. government coil production was experimental and short-lived, Johl writes. Few coils were made, and collectors either didn't know about them or paid them little attention. As a result, these first federal coil issues of the United States — the 1908 1¢, 2¢ and 5¢ coils (Scott 316, 321 and 317, respectively) — are now extremely scarce. The 1¢ coil pair shown in Figure 4 is another gem from the 1998 Zoellner sale, hammered down at $80,000.

Because of the tremendous value of the early coils, there have been many attempts made to create fakes by trimming perforations or creating counterfeit private perforations.

The Scott catalog listings for these early coil stamps include a premium variety identified as a "guide line pair."

Consider that the flat sheets of 400 stamps (20 stamps by 20 stamps) that were used to create these coils were printed one at a time on a flatbed press, with the intention of dividing them into panes of 100 stamps each that would be sold at post office windows.

When the uncut sheets were used to create coil stamps, each strip of 20 stamps would include a bit of the guideline that fell along the perforations directly between the 10th and 11th stamps.

Because only one guideline appeared in each strip of 20, collectors recognize that they are more scarce than coil pairs without the guidelines, and therefore they normally sell for a little more as well.

As the demand for coil stamps increased, the Bureau of Engraving and Printing looked for ways to automate its production. By 1914 the Stickney rotary press was put into production, and the BEP began printing coil stamps in continuous strips on a long roll of paper called a web.

The rotary press used two curved printing plates affixed to the exterior of a rotating cylinder so that the edges of each plate adjoined its partner. That meeting spot between the two plates created a natural gap where printing ink would be trapped and then would be printed at regular intervals as a line between stamp images across the web of stamp paper. The result was a marking on the rotary-printed issues that was virtually identical to the guidelines that appeared on coil stamps from the flatbed press.

And once again, collectors sought these infrequent joint line pairs just as they did the earlier guideline pairs.

At bottom in Figure 5 is a joint line pair of the 7.7¢ Saxhorns coil issue of 1976, printed on the Cottrell rotary press that replaced the Stickney rotary press in the 1950s.

Next week in Refresher Course we'll look at the modern era of coil stamp collecting in the United States and around the world.