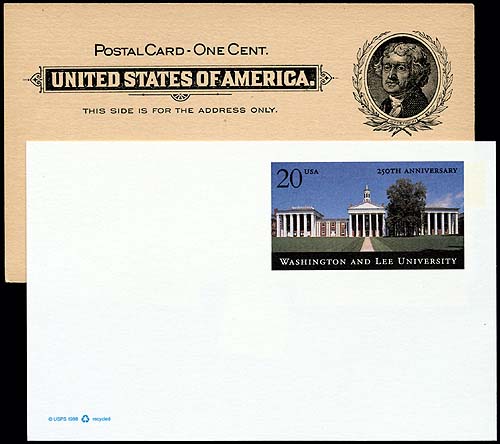 Figure 4. Two U.S. postal cards issued more than 100 years apart: the 1¢ black Thomas Jefferson issue of 1897 and the 20¢ Washington and Lee University issue of 1999. Click on image to enlarge.

Figure 3. Some modern postal stationery can be difficult to find postally used. The value of the typographed 29¢ Official Mail envelope of 1991 is greater postally used than mint. Click on image to enlarge. 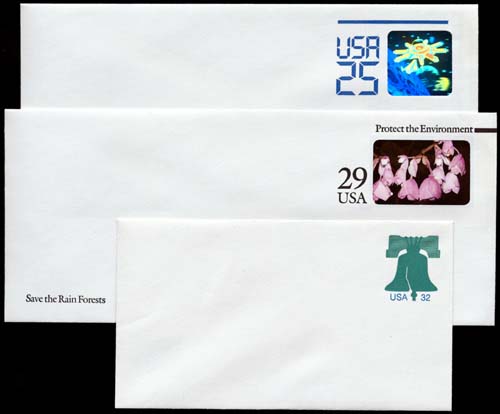 Figure 1. Three stamped envelopes issued by the United States in recent years. The 1989 25¢ Space Station envelope at top was the first U.S. issue to feature a holographic image. Click on image to enlarge.
Previous
Next

You may be surprised to learn that the first four hologram issues from the United States Postal Service were placed on sale between 1989 and 1995. These holograms were the vignettes (pronounced vin-YETS) or central designs of the imprinted stamps on stamped envelopes.

Stamped envelopes, postal cards and aerograms (or air letters) are collectively known as postal stationery. The defining characteristic of most postal stationery is that the items are imprinted with stamp designs with full postage value.

The imprinted stamp on a stamped envelope, therefore, pays the amount that is shown by the denomination, so it is not necessary to buy a stamp if the envelope is to be used for mailing and is current.

Stamped envelopes are sold at post offices for a slight premium over the postage value, to pay for the additional costs associated with the envelope.

Postal stationery items share many characteristics with postage stamps, and they can be collected in much the same way.

Because they often bear pictorial design elements, postal stationery items can be important additions to topical or thematic collections as well.

The first U.S. hologram envelope is shown at the top of Figure 1.

The hologram on the 25¢ stamped envelope issued in 1990 showed the Vince Lombardi trophy and football players in action.

The hologram on each of these four envelopes is visible through a die-cut rectangular window in the upper-right corner of the envelope paper. It is actually affixed to the inside of the envelope so that the design displays outwardly through the cut-out.

The same procedure was used in 1991 to create the 29¢ American Magazines envelope shown in the center of Figure 1, but the vignette is a multicolor gravure print rather than a hologram.

More frequently, the stamp designs are simply printed on the surface of the envelope paper, though often part of the design is also embossed.

The envelope shown at the bottom of Figure 1 is the 32¢ Liberty Bell issue of 1995, with a typographed and embossed design.

The first federal stamped envelopes from the United States were issued in 1853. For the next 100 years, literally hundreds of stamped envelope varieties were created, most featuring the embossed profile of a U.S. political dignitary within a printed oval frame.

Figure 2 shows the imprinted stamp of the 12¢ Henry Clay stamped envelope issued in 1870. The item as shown in the illustration is known as a "cut square." It was trimmed from the corner of an envelope specifically to save in a collection.

Most collectors today who come upon an entire stamped envelope save the "entire," as it is known, rather than cutting it down to save the cut square.

In the 2000 Scott Specialized Catalogue of United States Stamps and Covers, the 12¢ Henry Clay cut square in the illustration has a listed value of $110, but the value for an entire of the same issue is $250. Given a choice, it obviously would be wise to save the intact envelope for the additional value.

Cut squares were created from unused and postally used items.

The 12¢ Henry Clay cut square shown in Figure 2 is identified in the Scott U.S. specialized catalog as Scott U93.

U.S. postal stationery items are found in the Scott catalog following the listings for regular postage stamps and those stamps designated for special duty, such as airmails, Official stamps and parcel post issues. For that reason, postal stationery is often referred to as a "back-of-the-book" collecting area.

Modern U.S. stamped envelopes are created in a variety of sizes. The Figure 1 illustration shows, from top to bottom, a No. 9 size envelope, a No. 10 size envelope and a No. 6¾ size envelope.

Additionally, envelopes are regularly issued in varieties with address windows, so that the delivery address on enclosed correspondence can be seen through a die-cut window.

A windowed envelope is shown without its contents in Figure 3. The illustrated envelope is the 29¢ Great Seal stamped envelope of 1991, Scott UO85, an Official envelope. Official postal stationery (and stamps) can only be used by authorized federal agencies.

A number of modern postally used Official envelopes have relatively high catalog values because examples are infrequently found: mint ones are much more common. The Figure 3 envelope, postally used, is valued at $20, though the value for a mint example of the same issue is merely 70¢.

"Postal cards," like stamped envelopes, are imprinted with postage before they are sold by the post office. That's what distinguishes them from "postcards," which require the addition of a postage stamp before mailing.

Whether collected mint or postally used, postal cards are saved only as entires, not as cut squares.

Between 1873 and 1993, the United States issued 245 different postal cards. The stamp designs show many different subjects, ranging from presidents to American scenic views to historic sites.

From 1994 through 1999 the United States issued a staggering 142 postal cards. The numbers are inflated by the regular issuance of picture postal cards in large sets that correspond to multiple-design issues of commemorative postage stamps.

One of these cards, the 20¢ Francis Hopkinson picture postal card, is shown in Figure 5. The front of the card has the imprinted stamp design in the upper-right corner, while the reverse of the card shows a larger image of the design used on the stamp.

The Postal Service sells picture postal cards in sets at a substantial premium over the postage value of the cards.

Aerograms are postage-paid letter sheets intended for overseas mail. They are cut into a special shape that can be folded and sealed to resemble an envelope.

The imprinted stamp on the 1999 60¢ Voyageurs National Park aerogram in Figure 6 can be seen near the upper right. The back side of the aerogram, and the bottom portion of the front, are left blank for messages.

The United States has only issued about 30 aerograms since they first appeared in 1947. Collecting them postally used can be a wonderful challenge because most were sent overseas and can be difficult to find in the United States.

Postal stationery items can be stored in albums or stock books, or they can be preserved in cover sleeves and protected by a sturdy storage box. Stamp hobby supply dealers offer many different storage options.

As with stamps, the condition of postal stationery is very important. An unused stamped envelope with a dirt mark, bent corner or crease has substantially less value than a pristine card and is less appealing to the collector.

The United Postal Stationery Society publishes information about the collection of postal stationery and offers catalogs and auctions as well. For details, contact the UPSS, Box 1116, Thousand Oaks, CA 91358.