Buyer beware: the fake stamps are out there 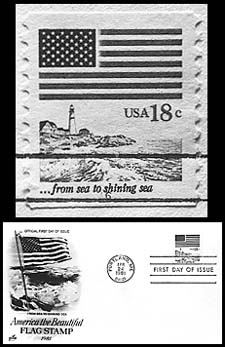 Figure 3. Altered stamps and covers are often created from a common, inexpensive genuine item. This 18¢ Flag coil has a small "6" falsely added to the bottom of the stamp design, making it resemble a scarce plate number coil stamp. Click on image to enlar 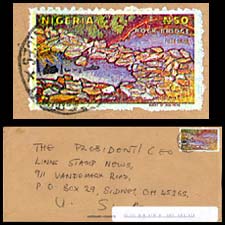 Figure 1. The newly revised book Linn's Focus on Forgeries by Varro E. Tyler provides comparisons of forged common stamps and genuine issues. Shown here are a forgery of Uruguay's 1926 20¢ airmail issue (left) and a genuine stamp. Click on image to enlarg
Previous
Next

Beware. They're out there. Without your knowledge, they may already be in your own collection.

They are fakes and forgeries, counterfeits, altered stamps and covers. Some collectors call them album weeds.

If you think the problem of phony stamps and covers is small and can't affect you, think again. Even experienced stamp collectors can be swindled by a more experienced scam artist, one who alters a common stamp or cover to make it seem much more valuable than it really is.

And many veteran stamp dealers don't realize that some of the inexpensive stamps they're carrying in their stock books aren't genuine. There are so many different kinds of alterations, stamp forgeries and counterfeit issues that dozens of books and hundreds of articles have been written about them.

Stamp collectors are affected by fakes and forgeries in two very different ways. First of all, the collector has to be aware these items exist to avoid being deceived into buying fake stamps that are offered as the real thing. And secondly, many fakes and forgeries, when properly identified, can make an interesting addition to a stamp collection.

Yes, a number of collectors, at an appropriate price, add forgeries to their albums intentionally, not for purposes of fraud, but to study the continuing history of the stamp hobby in one of its more unusual areas.

To begin with, let's dispel the common notion that only expensive stamps are faked. A swindler may be able to make an illegal profit by creating a fraud that looks like a valuable stamp, but that's not the only reason fakes are created.

In the introduction to the newly revised and expanded book Linn's Focus on Forgeries, author Varro E. Tyler notes that stamps cataloging for $50 or less "have been most commonly forged, usually to supply different varieties for the packet trade."

Tyler even notes that one obstacle he sometimes encounters in his study of forged stamps is that he has difficulty finding the genuine stamp he needs for comparison, because the forgeries abound and the genuine stamps are scarce.

Tyler's book, like his regular Focus on Forgeries feature that appears every other week in Linn's, compares the genuine stamp side-by-side with the forgery. Tyler points out with clear illustrations and a precise description exactly how a collector can tell the difference.

One deceptive forgery from the 321 different examples scrutinized in the new book is illustrated in Figure 1: it is an imitation of the 1926 20¢ airmail issue from Uruguay. Can you tell the difference between the fake and the actual stamp?

In the illustration, the forgery is shown at left, and the genuine stamp at right. The description that accompanies the photographs in the book points out that in this case, the forgery includes a distinct notch of color in the upper edge of the wing of the albatross shown in the design. A photographic enlargement of the important area, also shown here in Figure 1, points out the difference.

There are two basic types of stamp forgeries, created for two different reasons. A philatelic forgery, such as that of the stamp from Uruguay in Figure 1, is usually created with the intent to defraud or deceive the stamp collector.

In addition to these deceptive items, some stamp dealers of decades ago created what they called facsimiles, unofficial reproductions of postage stamps that collectors could purchase to fill the empty spaces on their album pages.

Many of these facsimiles included some type of inscription or marking to indicate they were not true stamps, such as the words "facsimile" or "falsch" (German for "false"). The word may be part of the stamp design, or it may be found stamped somewhere on the front or back.

The second type of forgery is the postal forgery, which is a stamp forgery created with the intention to defraud the government or postal administration. Postal forgeries are commonly referred to as counterfeit stamps, and often they are discovered on mailed envelopes and parcels. Examples of counterfeit stamps are uncovered regularly even today.

In recent years, a flood of mail promoting a mail-fraud scheme has been sent to addresses around the world in similar brown envelopes franked with forgeries of Nigeria Scott 560B, the 50-naira Rock Bridge stamp released May 23, 1990, to celebrate the 10th anniversary of the Pan-African Postal Union.

Senior editor Rob Haeseler reported these fakes in past issues of Linn's Stamp News. One such cover from Haeseler's report in the Nov. 30, 1998, issue is shown here in Figure 2.

Some collectors who received such a mailing have saved the envelope and its contents, knowing full well the stamp on the cover is a crude fake, probably created on a color photocopier. A dangerous problem for stamp collectors the world over is that of genuine common stamps altered to look like something more rare and valuable.

Often this deception is created either by adding or removing characteristics from the common stamp to make it look like a rarity. Any single common perforated stamp with wide margins, for example, may have its perforations trimmed away by a faker to create the impression that the stamp is a scarce imperforate error.

Collectors always need to be wary of this type of scam and proceed cautiously when considering purchasing a single stamp promoted as an imperforate error. For this reason, stamp dealers selling genuine imperforate errors often offer them as unsevered pairs or blocks that more clearly show they are genuine.

Figure 3 shows a dangerous altered stamp on a fairly common first-day cover. The 18¢ Flag coil of 1981 was the first United States coil stamp issued under a new U.S. Postal Service policy that added plate numbers at the bottom of individual stamps at established intervals. Before long it became obvious that plate No. 6 of the 1981 Flag coil was quite a rarity.

A first-day cover bearing a single plate No. 6 of this coil would be a terrific find, so one faker decided to create some on his own, using a plain, unnumbered stamp of the same issue. A small "6" was simply added to the bottom of the stamp at the position where a genuine plate number would be found. Police experts examining one of these covers brought to their attention discovered it was a fake and took steps to halt production of more.

What can the collector do to protect himself from dangerous fakes and forgeries? It's important to read about faked items whenever such news stories appear, for similar techniques are often used repeatedly to create different kinds of fakes.

Stamp collectors should always closely examine the stamps they are buying, particularly as the value or rarity of the stamp increases.

On valuable items, collectors should insist on receiving a certificate of authenticity from an established expertizing firm or organization. In the United States, the major ones are the American Philatelic Expertizing Service, Box 8000, State College, PA 16803; the Philatelic Foundation, 501 Fifth Ave., Room 1901, New York, NY 10017; and Professional Stamp Experts, Box 6170, Newport Beach, CA 92658.

Stamp experts associated with these organizations render opinions on the authenticity of stamps and issue a certificate with accompanying photograph that describes the stamp and identifies any flaws that are found.

Experts of the Royal Philatelic Society of London in 1999 examined a stamp purported to be an 1856 1¢ Magenta from British Guiana. Only one existing stamp in the world has been accepted as a genuine Penny Magenta; it is shown on top in Figure 4. The contender that hoped to share the title is shown below it.

After submitting the more recent find to high-powered microscopic examination, the expert committee of the Royal declared the stamp was a fake bearing characteristics of an altered 4¢ Magenta printed around the same time.

Of course, there are fees associated with such highly specialized work. Collectors interested in learning more can contact the expertizing groups for additional information.

There are far too many ways for stamps to be faked for the collector to accept every item at face value. Armed with knowledge and ready to give careful scrutiny, the collector has a chance to avoid the album weeds and accept only the genuine articles for his collection.