Here's what you can do to save the world 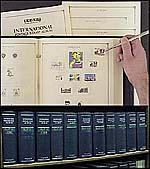 Figure 1. A number of different stamp albums are suited for the worldwide stamp collector, but be aware that any large worldwide collection is bound to take up a lot of shelf space.
Previous
Next

There are so many different ways to develop a stamp collection that it's probably impossible to think of them all. Many collectors intentionally limit their interests in one way or another, often by topic or by country.

By defining a collection in this way, the collector has fewer items that he needs to look for, and he can concentrate on finding items pertaining to the subject of his choice.

For some collectors, though, that way of doing things is simply too limiting. Those folks are worldwide collectors: they enjoy collecting all of the stamps in the world.

Every stamp in the world? How many is that? The editors of the Scott Standard Postage Stamp Catalogue can only estimate, but as year 2000 comes to an end they figure that the number exceeds 420,000, with about 1,300 new stamps being issued every month.

Those rough figures count only stamps that are listed with major catalog numbers. Keep in mind that a new pane of 20 stamps may be assigned just one major number.

Obviously the worldwide collector is never going to fill every space in every album.

Fortunately for most collectors, that's not the point. They are simply interested in all aspects of stamp collecting, and they don't want to deny themselves any part of it.

In a scientific survey of Linn's Stamp News subscribers conducted in 2000, 24 percent of readers described themselves as general worldwide collectors.

To some degree, many of us start out as worldwide collectors, but it looks like three out of four give up that ambition and choose to specialize in one area or another.

Most of those who remain worldwide collectors realize that organization is a key to keeping things all together.

That means choosing a way to store stamps so that the next time you get a stamp from Luxembourg to add to your collection, you'll be able to find the album where the stamp belongs.

Even when saving the whole world, collectors have many different ways to keep stamps arranged.

Many use preprinted stamp albums and supplements that are updated each year with spaces for every new stamp that has been issued.

One of these albums, the Scott International Postage Stamp Album, is shown in the picture at the top of Figure 1. The album shown open in the illustration has spaces for the stamps issued by the countries of the world during 1986. Two albums are required to complete that single year.

As you can imagine, collecting this way year after year means that you buy a lot of binders and pages. The picture at the bottom of Figure 1 shows about 10 binders holding International album pages.

Nearly 60 binders are needed to hold the complete world collection through 2000.

A collection that size is out of the question for some collectors. They choose to limit their worldwide accumulations to a specific era, such as the first century of postage stamps (from 1840 to 1940).

For other collectors, 60 binders are just a start.

Scores of worldwide stamp collectors dedicate entire rooms to hold their collections. Walls are lined with bookcases filled with albums, stock books, catalogs and supplies, while stamps yet to be sorted reside in storage boxes, glassine envelopes and filing cabinets.

Many worldwide collectors prefer to keep their albums divided by country, so they have all of their German stamps in one set of binders, all of their French stamps in another, and so on.

The six-volume Scott catalog lists several hundred stamp-issuing countries, so you can imagine that this method of collecting can also take up a lot of space.

A number of collectors use a combination of different albums to house their collections. General worldwide albums may not hold spaces for minor varieties, souvenir sheets and the like, so collectors sometimes resort to printing their own album pages or creating new space by adding blank pages to the preprinted ones.

The choice of collecting mint stamps or used stamps is often unimportant to general worldwide collectors. Any stamp that will fill the space usually meets with the collector's approval.

Some collectors have even saved both mint and used examples of the same stamp when they can, either by hinging both stamps on the same page, or by obtaining a second set of stamp pages so that they have one set for mint and one for used.

While most collectors keep a close eye on condition and always look for the best possible example of a needed stamp, many will accept a damaged stamp to fill an album space if a sound one is not available for a reasonable price.

Such damaged stamps are known as space-fillers. The collector remains aware of the faulty stamps in his albums and watches for better ones to replace them.

Collectors may start out in the worldwide collecting game when they inherit a collection-in-progress from a parent, grandparent or some other source.

Other collectors have established their worldwide interests by purchasing entire collections from retail stamp dealers or at auction.

Often these collections are not complete, but they make a good starting point for the person who wants to collect the world. In many cases, the collection already comes mounted on album pages, so the collector obtains both stamps and supplies with one purchase.

The next step may be filling in the empty spaces on the album pages.

Buying stamps one-by-one from retail dealers can be costly if you're working on a worldwide collection, so many collectors look for bargain methods to obtain those missing stamps.

There are many ways to obtain stamps at well below catalog value, including mixtures and packets (Figure 2 shows each) and approvals selections.

These offers are readily available with stamps for virtually every collecting area. Dealers in these selections regularly advertise in the pages of Linn's Stamp News.

Collectors who buy stamps in packets often get a large number of all-different stamps for a low cost per stamp. Stamp mixtures may provide a large number of stamps, but collectors often encounter a lot of duplicate stamps as well.

The collector simply selects his favorite from all of the duplicates to add to his collection, and then he trades his duplicate stamps with other worldwide collectors for other stamps that he needs.

Shown in Figure 3 is a typical collector's stock book filled with duplicate stamps of Iceland.

Once again, organization is an important factor in worldwide collecting. Keeping duplicate stamps neatly organized helps the collector when it comes time to make those trades.

Trading partners can be found in many ways. Local stamp clubs almost always have a number of members who enjoy collecting worldwide and swapping with others to build their collections.

Stamp exchange groups also advertise in the Trading Posthorn at the beginning of Linn's classified advertising.

Many worldwide collectors purchase stamps in much larger lots to work into their expanding collections.

Some stamp dealers offer box lots and complete mounted collections that appeal to the worldwide collector.

Larger lots are regularly available from auction houses that are dispersing estates or collections from similar sources.

The collector has to have the patience to understand that not every space will be filled, and that the worldwide collection may be a commitment that will last a lifetime.

Stamp album binders, pages, hinges and other supplies can be a little pricey, and putting together enough for a worldwide collection can take a lot of money.

Planning out the way you want to organize your collection will probably help you avoid large purchases you may later regret.

Be careful about what you purchase so that you can keep up with maintaining your collection and disposing of your duplicates.

The International Society of Worldwide Stamp Collectors is an association whose members share a common interest in collecting the stamps of the world.

The group publishes its journal, The Circuit, six times per year, and it offers members different ways to buy, sell and trade stamps. The ISWSC also takes an active role in helping youngsters interested in stamp collecting.

A membership application or additional information is available from ISWSC, Box 150407, Lufkin, TX 75915-0407. Please enclose an addressed, stamped envelope or International Reply Coupon with your request.