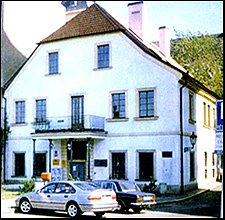 The Postage Stamp Museum in Prague has a charming, old-world feel and a complete collection of Czechoslovakian stamps. 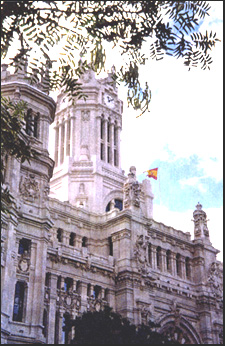 The breathtaking Palacio de Comunicaciones is the home of Madrid's Post and Telegraph Museum.

The Sunday bourse in Seville is held at the Plaza de Cabildo surrounded by lovely white balconies and pillars. 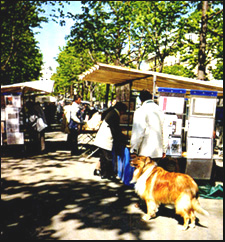 Visitors to Paris enjoy the dealers' booths at the open-air stamp bourse just off the Champs-Elysees.
Previous
Next

Travel may broaden the mind, but it also can be good for your stamp collection. Together with impressive monuments and mansions, parks and palaces, squares and boulevards, my voyages of discovery have taken me to stamp markets, postal museums and historic post office buildings across the European continent.

Along the way, I've bought tons of stamps and made many new friends. It's fair to say that travel can add a totally new dimension to stamp collecting, and some of the best stamping grounds in the world are little more than a few hours away from the United States by plane.

Many European cities have their own weekly stamp markets, but one of the biggest and most enduring is just a few yards from the Champs Elysees.

One view of the Paris bourse is shown in Figure 1. The market owes its location (in the shadow of the Elysee Palace) to a wealthy landowner who bequeathed the site to Paris in 1887. A condition of his bequest was that the land be used to benefit all those who shared his passion for stamps. Since then, the market has flourished, remaining open even during occupation and two world wars.Every Thursday, Saturday and Sunday, the usually quiet Avenues Gabriel and Marigny are transformed into a collector's paradise when more than 50 dealers set up stalls and prepare to welcome visitors from around the corner and around the world.

Each May, the Ascension holiday weekend is the occasion for a four-day philatelic festival, attracting even more enthusiasts to the market. Some dealers now offer coins, paper money, militaria and telephone cards. But the focus remains firmly on stamps and postal history, just as originally intended.

For me, no visit to Paris is complete without a Sunday morning stroll to the market, a few hours rummaging among the stalls, followed by lunch in a boulevard cafe, reflecting on my latest acquisitions.

Every Sunday morning, the Placa Reial becomes the setting for Barcelona's weekly stamp and coin market. This lovely square, with its elegant statues, swaying palm trees and handsome arcades, is a fine location for browsing or buying. Although the material offered is mainly Spanish, a few traders offer stamps from beyond Iberia.

Another post-related location in the Catalonian capital is located close to the cathedral in the city's gothic district. The Casa de L'Ardiaca was built in the 12th century. Upstairs is the Municipal Institute of Barcelona History, but the downstairs is of particular interest to postal enthusiasts.

Set into the old Roman wall is an elaborate marble letter box, carved with swallows and a tortoise. The flamboyant mailbox was featured on a 1994 Spanish stamp to celebrate the national stamp day. A replica of the mailbox can also be found in Madrid's Postal and Telegraphic Museum.

The Plaza de Cabildo is so small that on some maps of Seville it doesn't even make an appearance. But on a sunny Sunday morning, passers-by on the Avenida de la Constitucion can't fail to notice the buzz of activity coming from this charming square.

Surrounded by the lovely white balconies and colorful flowers that are such a feature of Seville, the market is just the place to track down stamps, postal stationery, postcards, stamp catalogs and books.Although smaller than its Barcelona and Madrid counterparts, the Seville stamp market is a real winner, both in terms of location and choice. A lovely view of this marketplace can be seen in Figure 2.

In Madrid, all roads lead to the Plaza Mayor. For collectors, the time to be there is, once again, Sunday morning. The choice is probably the best to be found among Spain's markets, with a wide range of stamps, postcards and postal history items, as well as coins, telephone cards and militaria. A good number of stamp shops are located in and around the Plaza, so even if your visit doesn't include a Sunday, you can still get a philatelic fix.

Just a minute from the Plaza Mayor is the Palacio de Comunicaciones, shown in Figure 3. Rising majestically from the southeast corner of the Plaza de Cabildo, Madrid's main post office has the appearance of a gothic cathedral rather than a place to buy stamps. The locals call it "Our Lady of Communications."Plaza de Mayor, Sunday, 10 a.m.-2 p.m.

Around the corner from the main entrance, a more modest doorway leads to the Postal and Telegraphic Museum. Collections of Spanish and overseas stamps, a fine stamp library and an interactive computer guide make this one of the better postal museums. Unlike most other Spanish museums, admission is free.

The Amsterdam stamp market is located close to the heart of the city. The helpful traders at the dozen or so stalls speak perfect English (just like most people in the Netherlands). The market is situated in a kind of stamp village, with stamp shops in the nearby Rosmarijnweg and Nieuwzijds Voorburgwaal open throughout the week.

For many travelers, visiting museums is just part of being a tourist. The same is true for the stamp tourist, and although tracking down specialist postal museums requires a bit of extra work, it's worth the effort. The site of the Vatican's Philatelic and Numismatic Museum is hard to beat.

Situated at the very heart of the Vatican Gardens, in the shadow of St. Peter's Basilica, the museum is housed in the Palazzo della Borgia. Once this building was used as Vatican's railway station. Only one pope, John XXIII, ever made a journey from the station, and with the advent of motorways and papal helicopters, it gradually fell into disuse. The building has since been reborn as a fine stamp and coin museum. The exterior retains its classical lines, but the inside is thoroughly modern.

On display are stamps and coins issued since the Vatican State was born in 1929, including a full sheet of a rare 1934 provisional issue. Also included are stamps from the Papal States — the territories ruled by the pope until Italian unification.

Postmarks, sketches, typographic plates, plasters, bronze casts and many other items used in the production of stamps and coins add a further dimension to the museum's collection.

Admission requires special permission from the Vatican administrative office. But once you leave St. Peter's Square to pass under the Arco delle Campana, (with a salute from the imposing figures of the Swiss Guards) it's hard not to feel a sense of exclusivity.

Unlike the other Vatican museums, this area is rarely visited by large groups of tourists. You're unlikely to catch a glimpse of the pope while wandering around the exhibits, but you will be following in his footsteps. John Paul II himself opened the museum in 1987.

A metro ride away from the Vatican will take you to the Eur district of Rome. This concrete jungle of a place was one of Mussolini's grand projects for modernizing the city. Although uninspiring, the district does have one special attraction for collectors. The Post and Telecommunications Museum is a real treasure, but thanks to poor promotion and no mention in the major guidebooks, few visitors to Rome get a chance to see it.

Even the entrance is nondescript. You could easily pass it by. But inside, its attractions are not to be missed: a beautiful ceramic map depicting the ancient Roman postal routes, a full-size replica of a 19th-century post office, mailboxes, paintings, early telegraphic apparatus and a complete collection of Italian stamps. Also on display are the cavallini sardi, rubber-stamped prints that predate the Penny Black of Great Britain by 21 years.

Postage Stamp Museum: Nove Mlyny 2, Nove Mesto, Prague 1, Tuesday-Saturday 9 a.m.-5 p.m.The Time Out Guide to Prague says its postal museum, pictured in Figure 4, is one of the most enjoyable museums in the city. The 17th-century villa has a charming, old-world feel to it, and its frescos, library and creaky floors all add to the effect. The display includes a collection of all Czechoslovakian stamps from 1918 until 1993, when the Czech and Slovak republics went their separate ways. Later stamps from the Czech Republic are also on show, as well as collections from the Soviet Union and some other former eastern-bloc nations.

During the 19th century, O'Connell Street was one of the most elegant boulevards in Europe. Today its charms have been severely curtailed by traffic jams, burger bars, litter and legions of tourists. But one outstanding feature does remain. The General Post Office is a gem of a building, classical in style but not in the least forbidding.

With its handsome portico, elegant columns and beautifully carved statues, it is a historical monument with a modern role. The building is the work of Francis Johnston and was completed in 1814.

A century later, it became the focal point for an Irish rebellion against British rule known as the Easter Rising. When the battle ceased, much of Lower O'Connell Street had been destroyed. The interior of the GPO was gutted, but the exterior portico survived.

The GPO may have a significant place in Irish history, but these days it still functions as a post office. As well as the usual postal services, the main hall on the ground floor includes a philatelic shop, providing the latest issues and helpful advice from the friendly staff.

One of the happy spin-offs of philatelic tourism is that once you've seen the sights, you can collect the stamps. Looking through my albums, I can revisit the Giralda Cathedral in Seville, the Grand Place in Brussels and the arcaded streets of Bologna.

Portuguese stamps featuring the trams of Lisbon transport me back to the weekly stamp market in the Praca de Comercio while a French miniature sheet brings back happy memories of my visit to the Philexfrance exhibition in Paris.

All of this underlines the depth of interest involved in combining travel and stamp collecting.

James Carson, who lives in Scotland, has been collecting stamps since 1985.