In 1992 the United States began to sell variable-denomination coil stamps in selected post offices. Customers could create strips of stamps with all-different values, as shown here. 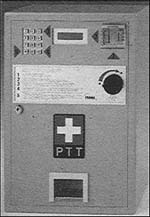 The Frama FE 2710 from Switzerland is one of many different machines that dispense variable-denomination stamps.
Previous
Next

Postal customers in the United States are accustomed to vending machines in post office lobbies that offer postage stamps in coils, booklets or small glassine packages. Many U.S. post offices leave their lobbies open after hours, making it possible for customers to complete their stamp purchases any time of the day or night.

These stamps begin as blank or decorated labels that have no denomination. The value is printed when the stamp is dispensed.In recent years, mailers in many countries have made increasing use of special postage stamps vended by machines that also print values on the stamps at the time of purchase.

Although this may sound similar to the postage labels and imprints created by postage meters, these machine-printed postage stamps are available to any postal customer who inserts payment into the appropriate vending machine.

The majority of such stamps are not dated, as postage meter stamps are, so they may be used at any time.

These stamps come in many different styles and go by many different names. In the United States, they are referred to as computer-vended postage or variable-denomination stamps.

In many other countries they are known as ATM stamps, an abbreviation for the German term "Automatenmarken" (automatic stamps).

Some collectors call them "Framas" after the name of one of the more prominent vending-machine manufacturers, Frama.

As usage of these stamps has increased, so has interest in collecting them.

A catalog that identifies the many variable-denomination stamps around the world is compiled by the German stamp catalog publishers Michel (most English-speakers pronounce the name as MISH-ul or MIK-ul).

The 2000 edition of the Michel Automatenmarken-Spezial-Katalog, shown in Figure 1, is written in German, but it includes a page of symbols and abbreviations that are used in the catalog, defined in both German and English.

For example, Hong Kong has issued variable-denomination stamps for several years. Each year a new design is created that corresponds to the Asian new year cycle represented by 12 different animals.

In 1988 — the Year of the Snake — the stamps featured the image of a snake, as pictured in Figure 2.

Each stamp also included the denomination, shown as "00.10" in the pictured examples.

The Michel ATM specialized catalog suggests that a mint set of Hong Kong's 1988 Year of the Snake variable denomination stamps should include (in Hong Kong currency) values of 10¢, 60¢, $1.40 and $1.80.

The catalog also identifies several varieties of these stamps, including one difference that can be seen in the two stamps illustrated in Figure 2.

The catalog notes that the number identifies whether the stamp came from the main Hong Kong post office (01) or the Tsim Sha Tsui annex office on Hong Kong's Kowloon Peninsula (02).

Other information provided includes stamp paper color varieties (there are two), the existence of fluorescent tagging on the stamps, the type of machine that created the stamps (Frama FE 264), the name of the designer (Michael Tucker) and the printing method used for the stamps (offset-lithography).

Similar details are provided for most of the stamps listed in the Michel ATM specialized catalog.

The catalog provides descriptions of 38 different manufacturers of variable-denomination stamps from around the world, including Frama of Switzerland, Klussendorf of Germany, and Electrocom (Eca-Gard) and Unisys of the United States.

Many of the descriptions include photographs of the machines, such as the Frama FE 2710 shown in Figure 3.

The modern age of variable-denomination postage stamps goes back to 1976, when postal authorities in Switzerland installed machines that would print and dispense postage labels with values of the customer's choice, ranging from 0.05 francs to 99.95fr.

Among the forerunners for this type of stamp are the 1936 Mailomat postage meter stamps from the United States that were sold publicly at coin-operated stations.

Figure 4 shows a strip of the U.S. Eca-Gard issue.

The stamps inside the Eca-Gard vending machine were in large coils originally printed with the Shield and Bunting design by the Bureau of Engraving and Printing.

When the Eca-Gard machines were first installed in a limited number of post offices, mailers could purchase stamps in any denomination they desired. The stamps came out as a continuous strip until the purchaser detached them from the machine.

As a result, it was possible to create and purchase strips of stamps with different denominations on each stamp. The Figure 4 strip begins with a 1¢ stamp followed by a 2¢, a 3¢, a 4¢ and so on up to 10¢.

The Postal Service eventually adjusted the machines so the minimum value that could be printed was 19¢ (the postcard rate at the time).

A second type of machine that vended similar coil stamps was manufactured by Unisys and is still in service at a few northern Virginia post offices. The earlier Eca-Gard machines were finally removed from service in 1998.

Variable-denomination stamps from most countries are dispensed as single detached stamps and cannot be collected in long strips as the later U.S. coil stamps can.

The Hong Kong stamps shown in Figure 2 are somewhat typical of the formats found in other countries.

Often these stamps come from machines with preset value choices.

Instead of being able to select any specific value for the stamps, mailers have the choice of several common rates, such as postcard, first-class, airmail and so on.

Along with collecting these variable-denomination stamps in mint sets, some collectors save postally used stamps on cover.

Figure 5 shows a 3.50-krone stamp from Denmark on an envelope mailed to northern Germany in 1995.

This nice example is tied to the cover by a dated postmark from Ostjyllands Postcenter. The term "tied" means the postmark covers both the stamp and part of the envelope paper.

Collectors can create specialized collections of variable-denomination stamps from a single country and look for uses that fulfill various rates.

Topical stamp collectors may be attracted to variable-denomination stamps because many of the postage labels contain background designs that fit well into different topical collections.

Several countries have featured birds on their stamps, including Japan and France.

Greece, Portugal and Spain have shown ships, Australia has shown kangaroos and lizards, Finland has pictured Santa Claus, and Macau has shown a bridge.

Many countries have issued variable-denomination labels that have only very plain single-color imprints with no pictorial design. Others, such as Denmark, started out plain but evolved into interesting and colorful stamps with a variety of designs.