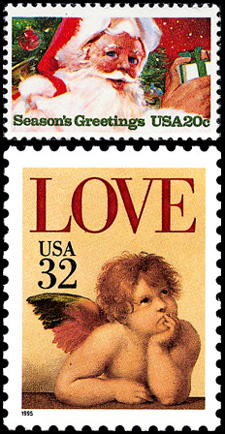 Figure 4. Special stamps from the United States include holiday issues and Love stamps. They are printed in larger quantities but often in a single press run. 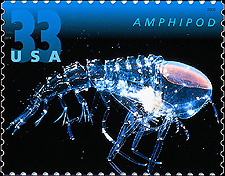 Figure 3. The 33¢ Amphipod commemorative stamp will be issued by the United States in October. Does the design really commemorate anything? 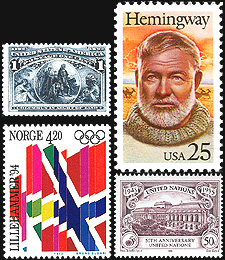 Figure 2. Commemorative stamps are printed in lesser quantities and generally remain on sale for a shorter time. 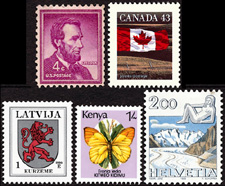 Figure 1. Definitive stamps are issued in great quantities and often remain on sale for long periods. Shown are definitive stamps from five different countries: the United States, Canada, Latvia, Kenya and Switzerland. The stamp designs show a variety of
Previous
Next

Can you tell the difference between a definitive stamp and a commemorative? If you're not sure, don't feel too bad, because you're certainly not the only one. Even postal authorities have trouble with those terms now and then.

Stamp collectors and postal authorities frequently categorize stamps to describe the postal purposes they fulfill. That's why you encounter categories of stamps such as airmail stamps, parcel post stamps, Special delivery stamps and so on.

Even among stamps created simply to pay regular postage fees there are a number of different names given to differentiate the way these stamps are printed and sold. Three terms that are used to categorize regular postage issues are definitives, commemoratives and special stamps.

Although these designations are sometimes helpful to distinguish different kinds of stamps, the meanings are often used in different ways by different groups or individuals. As a result, a stamp described as a definitive by one postal authority might be considered a commemorative stamp by some other postal system or by stamp collectors.

There are fixed meanings for each of these terms that have long been accepted by stamp collectors, but as the routines used by postal authorities to print and distribute stamps have changed and evolved, the differences between some of these terms, particularly definitive and commemorative, have often become much less distinct.

Let's look at the classic way these stamps have been defined in the past. Definitive stamps are probably what you see most frequently on your daily mail. The reason is that definitives are printed in far greater quantities than commemorative stamps.

Definitive stamps are also sent to press repeatedly when more stamps are needed, and often they remain on sale for many years after they are issued. These can include stamps of low denominations (such as 1¢, 5¢ and 10¢) or high round amounts (such as $1 or $5) that can be used to make up odd rates and fees.

The illustration in Figure 1 shows some definitive stamps from around the world. Shown at the top are the 4¢ Abraham Lincoln stamp issued in 1954 by the United States in the 1954-68 Liberty series and Canada's 43¢ Flag Over Prairie stamp issued in 1992. From left to right in the bottom row are Latvia's 1999 printing of the 1-santim Kurzeme Arms stamp originally issued in 1994, Kenya's 1-shilling Butterfly stamp of 1988, and Switzerland's 1983 2-franc Virgo and Monch Eiger Mountains stamp from the 1982-86 Zodiac set.

These stamps illustrate how the subjects and designs of definitive stamps can vary. The Lincoln stamp typifies the depiction of national leaders or other prominent individuals on definitive stamps. Former presidents once appeared with great regularity on U.S. stamps, though they have since been displaced by images of flags and fruits. The Four Fruit Berries stamps first issued in 1999 are definitive stamps.

The $2 Bobcat stamp issued by the United States in 1990 is a large, colorful definitive stamp that remains in use today. The $3.20 and $11.75 large and colorful U.S. stamps showing space shuttles issued in 1998 are also definitive stamps.

Although many people think of definitive stamps as small, single-color issues, the fact is that any stamp sent repeatedly to press for general continuous post office sales is considered to be a definitive stamp.

Some definitive stamps are part of long-running series that a postal service chooses to use for years and years. Great Britain's current Queen Elizabeth II definitive series began in 1967 with a simple design created by artist Arnold Machin. That same design is still in use, although it has undergone some minor alterations in recent years.

Even more astonishing is the longest-running stamp series in the world. Norway's continuing definitive series debuted in 1872 and features the numerals of the stamp value within the loop of a crowned posthorn.

Definitive stamps are issued in sheets, booklets and coils, and today they are found with self-adhesive or lick-and-stick adhesive.

Commemorative stamps generally remain on sale for a limited time, usually one to two years for United States stamps. Many believe that the majority of commemorative stamps that feature popular themes or subjects are created primarily for sale to the collector market, and that postal use of these stamps is secondary.

Commemoratives are almost always sent to press only once, although there are exceptions. For example, when the United States Postal Service printed a relatively low number of 32¢ Wisconsin Statehood commemorative stamps in 1998 — 16 million — Wisconsin residents and their political representatives complained that their state was being shortchanged. Postmaster General William J. Henderson then ordered a second printing of 16 million stamps to bring the total up to 32 million.

While that may seem like a lot of postage stamps, it really isn't much compared to the billions that are sometimes printed of a definitive stamp or special stamp issue. As an example, the 33¢ Fruit Berries self-adhesive coil stamps issued April 10, 1999, were printed in a quantity of 2 billion stamps. Stamps of the same design were also printed in panes of 20 (1.2 billion stamps) and folded booklets of 15 (153.75 million stamps). Altogether, the total printing of these Berries definitives was more than 100 times that of the Wisconsin Statehood commemorative.

These figures are staggering, but keep in mind that definitive stamps can go back to press to create even more stamps whenever stocks begin to run low. Definitive stamps are almost always printed in far greater quantities than commemorative stamps.

The basic concept behind commemorative stamp subjects is that the stamp commemorates an individual or event. The first U.S. commemoratives, for example, marked the 400-year anniversary of Columbus discovering America. The 1¢ value in the 1893 Columbian Exposition issue is shown at top left in Figure 2.

Other commemoratives shown in Figure 2 are the 25¢ Ernest Hemingway stamp issued by the United States in 1989 (top right), a 4.20-krone stamp from Norway issued in 1992 for the 1994 Winter Olympics (lower left) and a 50¢ stamp from the United Nations marking 50 years of that organization (lower right).

Many commemorative stamps seem to commemorate nothing at all. The U.S. Postal Service will issue five 33¢ stamps in October depicting deep-sea creatures. The design of one of these stamps, the 33¢ Amphipod, is shown in Figure 3. The stamps are scheduled to be issued in association with National Stamp Collecting Month, but the designs do not specifically commemorate that event.

Commemorative stamps are most frequently issued at the first-class-letter rate in the United States, though many other countries regularly issue commemoratives at international rates as well.

Special stamps fall into a separate category because they are usually issued in great quantities much like definitive stamps, but frequently they are printed in a single press run like commemorative stamps are. The category of special stamps includes many U.S. Love stamps and modern Holiday stamps, including Christmas issues.

If demand for a special stamp is great, the stamp may return to press for additional printings.

Many stamps are easily identified as definitive or commemorative given the guidelines described here, but there is still much confusion and misuse of the two terms. For example, the U.S. Postal Service created a 32¢ Henry R. Luce stamp in 1998 that it described as a definitive stamp in the Great Americans series, and by its design the stamp certainly did seem to fall into that series and the definitive category.

However, the stamp had just one print run of barely more than 25 million stamps, a number that is much more characteristic of a U.S. commemorative rather than a definitive.

Some countries print so many different sets in so many different denominations that it becomes hard to determine if any of them should be considered definitive stamps. Obtaining data from foreign postal services to help distinguish the types of stamps they are issuing can be difficult. Some postal authorities announce whether a new stamp is a definitive or commemorative, but, as in the case of the U.S. Henry R. Luce stamp, even that information can be misleading.

Collectors continue to use the terms definitive, commemorative and special stamps because they are part of the stamp collecting culture. The terms help to convey the idea of whether a stamp is issued for regular use (definitive) or whether it is issued for a short period or specifically for sale to collectors (commemorative).