Figure 3. Nondenominated stamps are issued by countries throughout the world. The three examples shown here are (left to right) from the United States, Finland and Singapore. Click on image to enlarge. 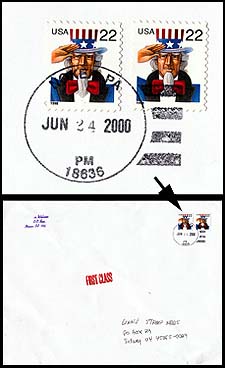 Figure 2. The two 22¢ stamps on this envelope pay a 44¢ postage rate that includes an unusual nonstandard surcharge. Click on image to enlarge.

Figure 1. The denomination of a stamp is indicated by a number that states its postage value. Shown are a 33¢ stamp from the United States, a 46¢ stamp from Canada, and a 110-pfennig stamp from Germany. Each represents the domestic letter rate for the respective country. Click on image to enlarge.
Previous
Next

The denomination of a stamp is the postage value, which is usually shown by numerals that are part of the stamp design. Figure 1 shows stamps from three different countries. Each stamp was issued during spring 2000.

The Library of Congress stamp at top left was issued by the United States. The number "33" represent 33¢, the cost of sending a letter of 1 ounce or less from one U.S. address to another. At right in Figure 1 is a 46¢ stamp from Canada honoring the Boys and Girls Clubs of Canada. At the time this stamp was issued, the domestic letter rate in Canada was 46¢ (in Canadian funds).

At bottom left in the same illustration is a 110-pfennig stamp from Germany commemorating 350 years of daily newspapers. German postal customers must pay 110pf to mail a letter from one location in Germany to another. Canada's letter rate is the equivalent of about 31¢ in U.S. currency. Germany's rate is a little higher, equaling about 53¢.

Each of the three stamps shown pays the respective country's domestic letter rates by themselves, but each may also be used in combination with other stamps to pay higher rates: for delivery to a foreign country or for delivery of a larger envelope or package, for instance.

The denomination of a stamp is important to many stamp collectors and to anyone studying postal history. Many collectors prefer to collect postally used envelopes or cards bearing stamps, used postal cards or used parcel wrappers, which are known collectively as "covers."

The appeal of a collectible cover often depends upon the stamp or stamps that were used to mail it. Many collectors enjoy sending and receiving mail franked with numerous older stamps. An example might be an envelope sent today franked with two 10¢ stamps and one 13¢ stamp from the 1970s to make up the 33¢ postage rate.

Collectors of postal history often look for less contrived examples that show how stamps are used during their normal sales period to properly pay a required postage rate.

Some collectors enjoy finding a cover that illustrates a complicated rate paid as simply as possible with contemporary postage stamps. A recent example of such a use is shown in Figure 2.

The 9-inch by 12-inch envelope was mailed June 24 from Pennsylvania to Ohio. Instead of bearing 33¢ in postage, however, the envelope bears two 22¢ stamps paying 44¢ in postage.

Was the postage simply overpaid by the collector? Actually, the postage paid on the envelope is precisely correct. The envelope contained only one piece of paper and altogether weighed less than 1 ounce, but the oversize envelope exceeds the letter-mail dimensional standards followed by the United States Postal Service.

Because it weighed less than 1 ounce but was greater than 11½ inches tall and 6? inches high, an 11¢ nonstandard surcharge is applied to the basic postage rate.

Most post offices don't have 11¢ stamps on hand, and no U.S. 44¢ stamps currently are on sale at post offices, but 22¢ stamps are readily available. To fulfill the unusual 44¢ rate, the mailer simply used two common 22¢ stamps. As a result, the cover nicely demonstrates how the nonstandard surcharge rate is properly paid.

The normal use for a 22¢ stamp is to pay additional per-ounce postage for a mailed letter weighing more than 1 ounce. For example, if the envelope in Figure 2 had weighed 1½ ounces, the postage would have been 55¢: the sum of 33¢ (the letter rate) and 22¢ (the rate for each additional ounce of weight). There is no nonstandard surcharge fee if the envelope weighs more than 1 ounce.

There is even available a 55¢ Ohio Class Submarine stamp, Scott 3375, that was issued March 27 as part of the U.S. Navy Submarines prestige booklet containing 10 stamps with five different designs and denominations.

The vast majority of United States mail sent with postage stamps is domestic letter-rate mail, so the Postal Service creates many different letter-rate stamps each year.

The residents of some foreign countries may make more frequent use of stamps paying a variety of rates, including international rates. As a result, postal authorities in these countries may regularly issue stamps in sets that provide several different denominations.

The lack of a denomination on each of these stamps can be confusing for stamp collectors, but fortunately, the face values of nondenominated stamps are usually described in stamp catalogs.

Nondenominated U.S. stamps are usually issued in conjunction with changing postal rates. The 1995 Love stamp (Scott 2948) at left in Figure 3, for example, was issued Feb. 1, 1995, just one month after U.S. domestic letter rates increased from 29¢ to 32¢. Because the amount of the rate increase was not known when the stamps were printed months in advance of their release, they were printed without a denomination, and then sold for 32¢ each.

The Spring Anemone stamp from Finland in the center of Figure 3 was issued May 9 and sold in sheets of 10 for 35 markkaa. The stamp is marked "1 luokka klass" to indicate it is for first-class postage. The 1995 Philatelic Museum stamp from Singapore (Scott 729) is designated "FOR LOCAL ADDRESSES ONLY" and sold for 20¢ in Singaporean currency.

U.S. nondenominated stamps generally keep the postage value assigned to the stamp at the time of issue. For example, the nondenominated A-rate Eagle stamp issued in 1978 with a value of 15¢ is still worth 15¢ in postage today.

Some countries allow mailers to use nondenominated first-class postage stamps to pay the current postage rate, regardless of the cost of the stamp when first issued. If that were true in the United States, the A-rate stamp could be used to pay 33¢ in postage today.

Reviewing the denominations of the stamps you collect and the purposes they serve can help you better understand how they fit into the world of postal history.