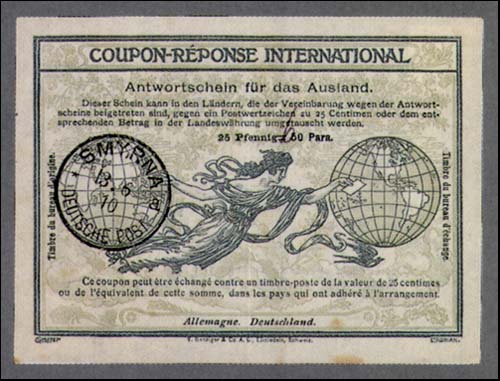 Figure 3. IRCs can document aspects of postal history, as shown by this 1910 example from Germany offices in Turkey. Click on image to enlarge. 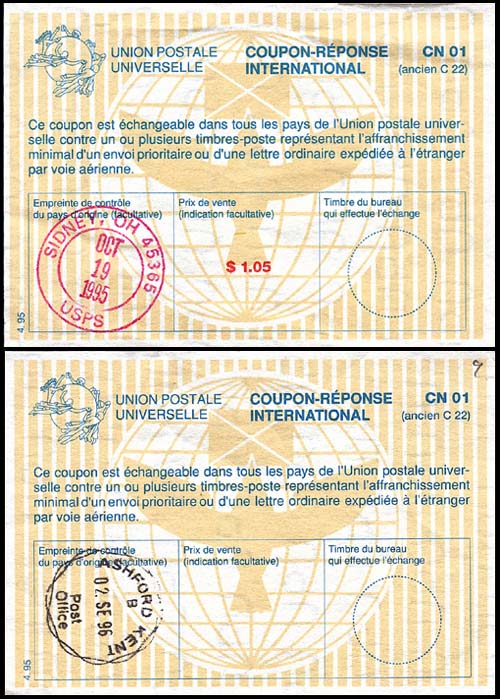 Figure 1. International Reply Coupons from the United States (top) and Great Britain (bottom). The same form is used in both examples. Postmarks distinguish the issuing country. Click on image to enlarge.
Previous
Next

International Reply Coupons have two uses for collectors of stamps and postal history. They can be saved as interesting collectible items, and they can be useful when conducting mail correspondence or transactions with people in other countries.

That works fine if the person to whom you are writing is in the same country as you. What if you live in the United States and you would like a price list from a stamp dealer in Great Britain? Sending an addressed envelope with United States stamps on it would not help the British stamp dealer because the U.S. stamps are not valid in his country.

It may surprise you to learn that this problem was solved in 1906 by the International Reply Coupon. IRCs can be purchased for a set amount in one country and be redeemed for postage stamps in a post office in a different country.

If you send the British stamp dealer an IRC with your request for his price list, he will be able to redeem the coupon for postage stamps that fulfill his minimum international postage rate. Some stamp dealers and other businessmen request IRCs from customers in other countries who ask for information. They may request more than one IRC if the information requested costs more to mail than the minimum postage rate.

A standard IRC form is used in post offices internationally. Shown in Figure 1 are a 1995 IRC from the United States (at top) and a 1996 IRC from Great Britain (at bottom). Just two add-on features differentiate them: the U.S. coupon bears a U.S. postmark and an imprinted value in U.S. dollars. The British coupon bears a British postmark. The British example shown does not bear printed value.

Printed on the coupon is a message in seven languages (German, English, Arabic, Chinese, Spanish and Russian on the reverse; and French on the front): "This coupon is exchangeable in any country of the Universal Postal Union for one or more postage stamps representing the minimum postage for a priority [first-class] item or an unregistered letter sent by air to a foreign country."

The Universal Postal Union is an organization created to encourage cooperation among postal services of the world. The IRC is a small example of this cooperation, as it is recognized in every UPU country. A previous Refresher Course column contained additional information about the UPU (Linn's Stamp News, Aug. 23, 1999, page 54).

The UPU was formally established in 1874. During the 1906 Rome congress of UPU postal administrations, the concept of the International Reply Coupon was agreed upon. The front of the present-day IRC is printed in yellow with the design of a bird carrying a letter in its beak, superimposed over the geographic grid of a world globe, with a background of vertical stripes.

Another bird, with International Reply Coupons as wings, was pictured on Switzerland Scott 9O14, a 120-centime stamp issued in 1983 for the official use of the international bureau of the Universal Postal Union. The stamp is shown in Figure 2.

Early coupons bore the printed name of the issuing country, with the message on the front appearing in a language relevant to the issuing country. Since they were created before the days of airmail, the earliest coupons could be redeemed for a stamp representing single-rate ordinary postage to a foreign country.

The first design showed an allegorical female figure delivering mail from one part of the globe to another. The example shown in Figure 3 displays this design. It is a 1910 IRC from Germany's offices in Turkey.

How collectible are these coupons? Well, the Figure 3 IRC is from the recent Corinphila stamp auction of the Cihanger collection that took place at the end of April. The example appeared in the lavish auction catalog with a preauction estimate of 300 Swiss francs (about $180).

Most IRCs in collector hands are struck with one postmark, as the illustrated examples show. The postmark shows where and when the coupon was issued. When the coupon is taken to the post office to be redeemed, whether in the United States or in some other country, it is postmarked at right by the redeeming postal clerk, who then keeps it and provides the correct amount of postage. It may be possible to find a coupon with two postmarks that made its way into collector hands, or blank coupons with no postmark.

IRCs that demonstrate an intriguing aspect of postal history, such as the coupon from Germany's offices in Turkey, are particularly nice additions to a collection. A different type of IRC postal history artifact is shown in Figure 4. When U.S. international postage rates were increased in July 1995, the cost of an IRC was increased from 95¢ to its present cost of $1.05.

In the Dec. 18, 1995, issue of Linn's Stamp News (page 20), postal historian Terence Hines reported that a message was transmitted to all U.S. post offices July 11, 1995, stating in part, "Old rate international reply coupons (95¢) will continue to be sold in combination with the 10¢ Red Cloud [stamp] or its equivalent. The additional postage is to be affixed to the IRCs at the point of sale."

An example of this revaluation dated Sept. 9, 1995, by a post office in Chappaqua, N.Y., is shown in the Figure 4 illustration. Hines noted that the 1995 order was the first time the Postal Service authorized the use of stamps to revalue an IRC, though the unauthorized use of stamps for this purpose is known for an increase from 22¢ to 26¢ in 1974.

The Scott Specialized Catalogue of United States Stamps & Covers illustrates the four major coupon designs that have been issued by countries around the world, and it describes many different minor varieties that exist. Major design changes for the coupon were instituted in 1931, 1968 and 1975.

The Scott catalog also describes and values the varieties of IRCs specifically issued for the United States. It lists and values coupons with one postmark only.

Collectors can look for IRCs from other countries to add to their specialized collections of those countries. Collectors visiting foreign countries may purchase IRCs when they are visiting a local post office. Unlike postage stamps, which can be ordered by mail from postal authorities or from stamp dealers, an IRC will document the date and location of the visit, providing a personalized souvenir for a stamp collection.