Stamp hobby abbreviations can be decoded 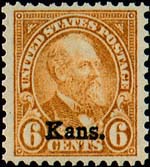 Figure 4. Overprints are added to unused stamps by the issuing postal authority. Regular stamps overprinted "Kans." or "Nebr." were issued by the United States in 1929 as part of a program to reduce post office burglaries. 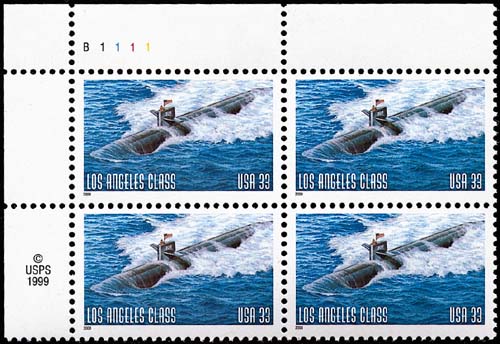 Figure 3. The abbreviation "PB" is sometimes used to refer to a plate block of United States stamps. Shown is a plate block of the 33¢ Submarines issue released March 27. Click on image to enlarge. 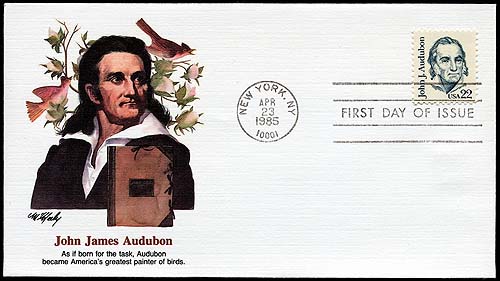 Figure 2. A first-day cover (FDC) is postmarked on the day of issue for the stamp franking the cover. The 22¢ John J. Audubon stamp was issued April 23, 1985, in New York City. Click on image to enlarge. 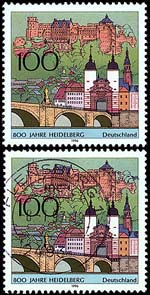 Figure 1. Stamp dealers sometimes use special symbols to indicate if a stamp is in mint condition (the 1996 German stamp shown at top) or postally used (the example at bottom).
Previous
Next

The stamp hobby has a language all its own. Collectors and stamp dealers regularly discuss their interests using terms that are quite unfamiliar to noncollectors. That language becomes even harder to comprehend when the terminology is abbreviated in print.

Yet there are dozens of symbols and abbreviations commonly used throughout the stamp hobby that can mystify newer collectors and puzzle even more advanced collectors who are unfamiliar with them.

From time to time on this Collectors' Workshop page, Linn's Stamp News publishes a guide to philatelic symbols and abbreviations that are commonly used in print. That list appears below. It contains more than 80 symbols and abbreviations that you might find in dealer price lists, in classified or display advertising, or even in editorial text in stamp-hobby specialty publications.

Linn's writers use some of the abbreviations found in the list below, but you'll find that the entire word or phrase is spelled out the first time it appears in a Linn'sarticle. For example, if you come across the initials "USPO" in an article you are reading, you could look back over earlier paragraphs and find that the first reference spells out "United States Post Office."

These terms refer to the condition of a stamp or group of stamps. A mint stamp is unused and undamaged, with full gum on the back (if that's how it was issued), in the same condition it should be when it leaves the stamp printer. The word "used" describes a stamp that was placed on an envelope, postcard or parcel to show that postage was paid. The used stamp is commonly struck with a postmark.

Figure 1 shows two examples of Germany Scott 1934, a 100-pfennig stamp issued in 1996. The stamp at top is in mint condition. It is unmarked on the front and has full undisturbed gum on the back. The stamp at bottom was used to mail a letter. After it traveled through the mail, a stamp collector soaked it from the envelope paper, so it no longer has gum on the back. The front of the stamp shows a postmark from the northern German city of Flensburg.

A stamp dealer's price list or advertisement may offer both of the stamps shown in Figure 1, using the symbols representing "mint" and "used" to differentiate the two.

APS refers to the American Philatelic Society, a national organization of stamp collectors in the United States. The APS participates in national stamp shows and exhibitions, operates a stamp sales division, publishes the monthly magazine the American Philatelist, provides access to insurance for collections, and has the most extensive public-access philatelic library in the United States.

ASDA is the American Stamp Dealers Association, a large nationwide organization of individuals and businesses involved in the stamp trade. Along with the APS and the United States Postal Service, the ASDA also serves as a major stamp show sponsor. Because the ASDA requires that its dealer members follow specific ethical guidelines, many stamp collectors prefer buying and selling from dealers who are ASDA members.

FDC stands for first-day cover. It refers to any cover (most often an envelope or postcard) that is postmarked on the first day of issue for the stamp affixed to it. A modern FDC from the United States is shown in Figure 2. In the upper-right corner is the 22¢ John J. Audubon stamp of 1985. The postmark across the stamp includes the words "FIRST DAY OF ISSUE." Older FDCs may not have this type of souvenir postmark. Instead, the postmark simply bears the date of issue for the stamp on the cover.

CDS is an abbreviation for circular datestamp. It refers to a round, dated portion of a postmark used to cancel stamps. The stamp shown on the cover in Figure 2 has been canceled by a postmark that has two parts. The CDS is the circular part at left that reads "NEW YORK, NY" and is dated "APR 23 1985." The straight lines at right that cancel the stamp are known as the killer bars.

EKU stands for earliest-known use. There are two primary uses for the abbreviation EKU. For some classic stamps, an FDC may not exist. That is, while the date the stamp was issued may be known, no cover has been found bearing that stamp and postmarked on the date of issue. In such cases, the EKU is recorded: it is the cover bearing the stamp that has the earliest postmark on record.

PB refers to plate block, a collecting format popular with some collectors in the United States for many years. Plate blocks are groups of four or more stamps with attached margin paper that includes the plate numbers or cylinder numbers used for that issue.

Figure 3 shows a plate block of the 33¢ Los Angeles-class Submarine stamps issued March 27. Plate blocks for stamp issues with multiple designs may consist of more than four stamps. The exact configuration of the plate block for each U.S. issue, when applicable, is described in the Scott Specialized Catalogue of United States Stamps & Covers.

Opt. or Ovpt. is an abbreviation for overprint. An overprint is a message imprint applied to unused stamps by the postal authority that issues the stamps. Stamps are officially overprinted for many reasons. Some overprints announce a new name for the issuing country. Others overprints called surcharges change the value of the stamp.

Figure 4 shows an overprinted stamp from the United States, part of the 1929 Kansas-Nebraska issue. The 6¢ James Garfield stamp of 1927, Scott 638, was overprinted "Kans." as part of a program formulated to reduce stamp burglaries from post offices. "Kans." or "Nebr." overprints were applied to 22 different issues. Overprinted stamps receive their own catalog listings. The 6¢ Garfield with "Kans." overprint in the illustration is Scott 664.

The definitions provided here are general, and exceptions may exist for some of them. As you become more familiar with the stamp hobby, you will learn to recognize many of the symbols and abbreviations that are commonly used.