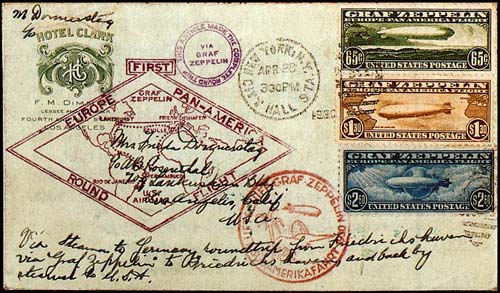 Figure 4. Many factors can affect the value of an airmail cover, including the stamps franking the envelope, mailing date, postal markings, private cachets and the flight itself. Click on image to enlarge.

Figure 1. The first airmail stamp in the world (left) was an overprinted special delivery stamp issued by Italy in 1917. The first United States airmail stamp (right), issued in 1918, was the first stamp specifically printed for airmail use. Click on imag
Previous
Next

When Wilbur and Orville Wright made the first power-driven, controlled, heavier-than-air airplane flights on Dec. 17, 1903, they envisioned that their efforts could someday lead to passengers and mail being transported by air.

Eventually others saw the benefits of using airplanes to carry the mail, and it was only about a decade after the Wright brothers' experimental flights at Kitty Hawk, N.C., that airmail service became a reality.

Airmail has been an important element of the stamp hobby for nearly 90 years, although one could easily go farther back, to the 1859 mail-carrying balloon flight of John Wise in Indiana, or the 1870s, when mail was sent from Paris by manned balloon and pigeon post during the Franco-German war.

There is even a record of messages sent by French balloon from a fortress at Conde in 1793.

The airmail collecting community acknowledges many forms of air transportation besides the airplane, including catapults, zeppelins, helicopters, rockets and manned spacecraft.

Some of today's collectors focus on assembling collections of stamps that have been created for airmail service, while others look for the envelopes, postcards and aerograms that have been sent through the mail and document airmail postal history.

The first airmail stamp is generally acknowledged to be the overprinted 25-centesimo issue from Italy placed on sale in May 1917. The stamp was originally an Italian special delivery stamp that was overprinted with three lines of text in black type:

The overprint translates as "Air post experiment, May 1917, Turin-Rome, Rome-Turin." An example of Italy Scott C1, the world's first airmail stamp, is shown at left in Figure 1.

The letter C that appears as a prefix of the Scott catalog number for this stamp designates a stamp intended for airmail use. Such stamps often have the word "airmail" or the foreign language equivalent printed upon them.

The Italian airmail stamp was created for an experimental flight that took place May 20, 1917, and returned May 27. The plane carried 440 pounds of mail and 200 newspapers.

The world's first airmail stamp doesn't show an airplane, but it does mention "air post" in the overprint. The first stamp specially printed for airmail doesn't say airmail anywhere on it, but it shows an airplane well-known to collectors of United States stamps: the Curtiss JN4H, also known as the "Jenny."

The United States issued three airmail stamps in 1918. The first, placed on sale May 13, has a denomination of 24¢ and was printed in two colors: a carmine red frame around a blue vignette (the central part of the design) of the Curtiss Jenny in flight. The stamp is shown at right in Figure 1.

The reason that stamp collectors know this stamp so well is that one of the world's greatest stamp errors was created with this issue. Known as the "Inverted Jenny,v the error stamp shows the airplane flying upside down instead of right side up.

The error was created when a partially printed sheet of stamps was turned around before it was sent through the printing press. Only 100 examples of the error stamp were ever found, bought as a single pane the day the stamps first went on sale by a stamp collector named William T. Robey.

In Airmail Antics, a book published by Linn's Stamp News, author Fred Boughner points out that the very plane shown on the first U.S. airmail stamp was also the very first plane used May 15, 1918, to carry the nation's first organized airmail delivery –– right down to the five-digit identification number, 38262, that appears on the side of the plane on the stamp.

Although Airmail Antics is now out of print, it may still be available from some dealers in philatelic literature.

The cost of the first U.S. airmail stamp met the price for airmail delivery of a letter along a route between Washington, D.C., Philadelphia and New York City.

Even though the 24¢ Jenny airmail stamp was the first U.S. airmail issue, it was not the first stamp to show an airplane. That honor goes to the U.S. parcel post stamp issued in 1913 (and shown here in Figure 2). Below the vignette is printed the phrase, "Aeroplane Carrying Mail."

Many countries have issued airmail stamps over the years, often with various denominations to fulfill postage rates for domestic or international delivery, or mail of varying weights.

United States airmail was for many years divided into two basic categories, domestic and international, with additional rates for other airmail services (such as airmail special delivery and airmail postcards).

As a very basic example, domestic airmail letter service in 1964 was available for 8¢ per ounce, while international airmail service to Europe during the same year was 15¢ per half-ounce. Appropriate airmail stamps were available to fulfill either rate.

This seemingly simple rate explanation belies the fact that airmail rates were far more complex during the early years of air service, and specialist collectors often engage in substantial research to understand the postage fees paid for the delivery of letters in years past.

The United States and many other countries also have issued postal stationery items that were specially designed for airmail purposes. One of the more common of these items is the aerogram or air-letter sheet, which consists of one lightweight sheet, normally imprinted with a stamp. The message is written on one side of the sheet, which is then folded into the shape of an envelope, sealed and addressed.

Stamped envelopes and postal cards for airmail use were also sold at post offices in many countries. An unused 1985 airmail postal card from the United States is shown in Figure 3. The 33¢ value imprinted on the card fulfills the international postal card rate in effect from Feb. 17, 1985, to April 2, 1988.

A stamp collector may collect the airmail stamps and postal stationery items of a specific country as part of the general country collection, or he may develop a specialty interest in airmail stamps from one or more countries.

Another collecting interest for airmail enthusiasts is the field of cover collecting. Covers are mailed envelopes, postcards, wrappers and similar items, and they are collected for the way they document certain rates or specific airmail flights.

A simple envelope bearing one 15¢ U.S. airmail stamp mailed in 1964 from the United States to an address in Germany might not be particularly valuable, but it would be a legitimate example of the half-ounce international airmail letter rate then in effect.

As cover collectors build their collections they are continually challenged to find examples that represent rates that are more complex, which often means that legitimate examples are more scarce. Many collectors are also intrigued by souvenir covers created years ago by their predecessors in the airmail collecting specialty.

The cover pictured in Figure 4 was sent by zeppelin mail on the first Europe-Pan American round-trip flight of Germany's Graf Zeppelin. The envelope is marked with a 1930 New York City postmark and two circular cachets (in this case, stamped markings) documenting the zeppelin journey.

Added to all of this is the presence of the three most cherished U.S. airmail stamps: the 1930 Graf Zeppelin set issued specifically to commemorate the round-trip flight. These three stamps, with denominations of 65¢, $1.30 and $2.60, were available at post offices for only 73 days. They were withdrawn from sale June 30.

The cover shown in Figure 4, with a few minor faults, sold for nearly $1,000 during a 1990 auction. Some airmail covers sell for much more than $1,000, and of course there are many that also sell for far less.

Many airmail collectors rely upon philatelic references that help them research and understand the items they collect. For example, the airmail rate information quoted earlier in this article comes from two important books by Henry W. Beecher and Anthony S. Wawrukiewicz: U.S. Domestic Postal Rates, 1872-1993 and U.S. International Postal Rates, 1872-1996.

The five-volume American Air Mail Catalogue published by the American Air Mail Society is a truly remarkable record of many significant airmail collecting areas, including documentation of contract airmail routes and many other topics that have been mentioned in this article.

Membership dues are $23 per year for U.S. residents, $28 for foreign residents, which includes a subscription to one of the two publications. For a membership application, write to the AAMS, Stephen Reinhard, Box 110, Mineola, NY 11501.