Small perforation varieties are worth notice 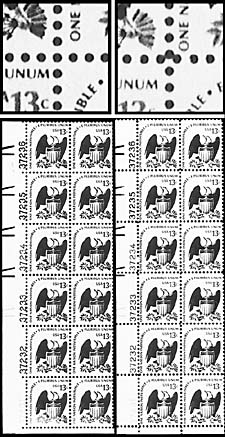 Figure 3. Perforation varieties of the 13¢ Eagle and Shield stamp of 1975 are also known, but the difference is less than ½ of a perforation. The variety shown here at left is given a major-number catalog listing, Scott 1596. It was created with a bull's- 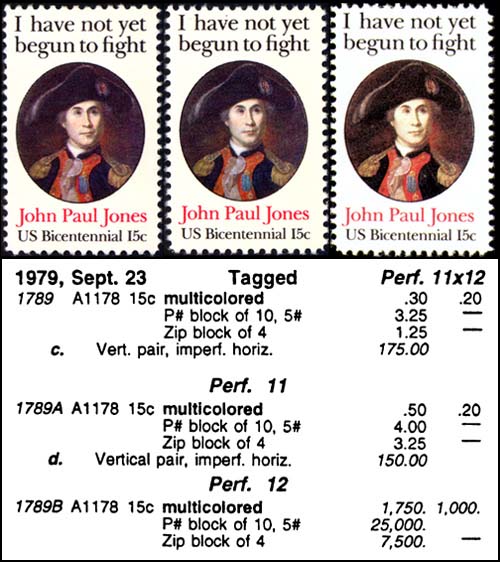 Figure 2. The three 15¢ John Paul Jones stamps look virtually identical, but each has a different perforation gauge. At left is the common 11 Ã— 12 variety (Scott 1789). At center is the variety perforated 11 (1789A), and at right is the scarce gauge 12 v

Figure 1. In this illustration, the perforations of two similar stamps are being measured. The perforation tips along the top of each stamp touch the slanting vertical lines at different positions on the perforation gauge: at 10 for the stamp at left, and
Previous
Next

Sometimes when a new stamp is placed on sale, collectors discover consistent minor differences between two otherwise identical stamps from the same issue. An example of this is a variety in perforations, the small holes that surround stamps created in a lick-and-stick format.

A rulerlike measuring tool called a perforation gauge is used to precisely measure the perforations and assign a number that identifies how far apart the holes are.

There has been some confusion about the use of the word "gauge," because it has two meanings for stamp collectors. The word "gauge" is used to describe the actual measurement of the perforation, as well as the tool used to do the measuring.

So a collector may say that the gauge of a certain stamp is "perforation 11" or "perf 11," and he uses a measuring tool called a perforation gauge to make that determination.

Let's examine the two very similar stamps shown together in Figure 1. Can you tell the difference between them just by looking? Both are varieties of the 29¢ Hank Williams stamp issued in 1993 in panes of 40.

Although the stamps appear to be nearly identical, there is a significant difference in the gauge (measurement) of their perforations. Both stamps are shown resting on the measuring scale of the perforation gauge.

Look along the top edge of the stamp at left in Figure 1. Each perforation tip touches the slanting vertical lines right where the perforation gauge measures "10." The number 10 appears on the gauge just to the left of the top of the stamp.

If you were to slide that stamp up or down that measuring scale, the tips would no longer line up with the slanting vertical lines. When measuring the perforations of a stamp, the stamp also must be turned sideways so that the vertical sides are measured. On the Williams stamp, the measurement of the vertical side is also 10, so a collector can simply describe the overall measurement as "perf 10."

Now look at the top edge of the stamp at right in Figure 1. The tip of each perforation tooth again touches the slanting vertical lines, but it does so on the measuring scale at 11.2, not at 10.

These numbers, by the way, represent the number of holes or perforation teeth within the space of two centimeters. A gauge of 11.2 indicates that the holes are closer together than they are on a stamp with a gauge of 10.

With the release of the 2001 Scott Specialized Catalogue of United States Stamps and Covers, stamp collectors will find that 69 U.S. stamps issued as far back as 1975 will be listed with major catalog numbers for the first time.

These stamps are all perforation varieties that previously were listed in the catalog with minor numbers (numbers with a small letter suffix), designating them as minor varieties of the basic stamp.

The revised listings are an upgrade for the 69 variants, and Scott Publishing Co., which also creates stamp album pages and supplements, will print and sell new album pages for collectors who would like to update their U.S. albums with spaces for the newly listed stamps.

Scott editors say that the reason for the change is to provide greater consistency in the U.S. catalog listings. From this point forward the editors intend to bestow separate major-number catalog listings for any U.S. stamps of the same design that show a perforation difference of ½ or greater in either the horizontal or vertical direction.

Do these changes really make any difference? How important are such tiny perforation gauge differences, anyway? In fact, they can be very significant among collectors and dealers. Stamp collecting is a hobby where very small differences can mean very big changes in value.

Incredibly, the gauge 12 variety is so scarce that it sells for nearly $2,000, while the other two varieties can be purchased for 50¢ each or less. A condensed version of the Scott catalog listings for each John Paul Jones variety is shown below the stamp illustrations.

Stamps that have perforation gauge differences of less than ½ will continue to be listed as a minor variety in the Scott catalog, as is the case with the 13¢ Eagle and Shield stamp of 1975 from the U.S. Americana series.

The standard issue of this stamp is listed as Scott 1596, with a perforation measurement of 11.2. A minor-number listing (Scott 1596d) includes the notation "Line perforated."

A note at the end of the listing for the stamp adds this information: "On No. 1596 the entire sheet is perforated at one time so the perforations meet perfectly at the corners of the stamp. On No. 1596d the perforations do not line up perfectly and are perf 11." The illustrations in Figure 3 help show this difference.

A perforation gauge can be used to distinguish these two varieties, but the differences between perforation 11.2 for the standard issue and perforation 11 for the scarcer variety are quite close and can be a little tricky to determine.

The perforation gauge shown in Figure 1 is Linn's Multi-gauge, which includes a zero-center ruler, a millimeter ruler and a cancellation gauge. It is available from many stamp dealers, or it can be ordered directly from Linn'sthrough the Linn's Library advertisement on page 65 of this issue.

Other perforation gauges and devices are available from stamp hobby suppliers, though some devices use alternative methods to measure perforations.