There's no end to the varieties of booklets

Figure 6. The United States followed the lead of Great Britain and other countries when it issued its first prestige booklet. 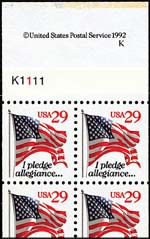 Figure 3. Plate numbers have been printed on the tabs of most perforated U.S. booklet panes issued since 1981.

Figure 2. Two 20¢ Flag Supreme Court stamps from 1981. The straight edge on the right side of the stamp at right helps to identify it as the booklet variety.

Figure 1. From 1900 to 1996, the United States issued booklets of perforated stamps with individual stamp panes.
Previous
Next

According to the Scott Specialized Catalogue of United States Stamps and Covers, the first booklet of U.S. postage stamps was issued April 18, 1900. It contained the red type IV variety of the 2¢ George Washington stamp of 1899, Scott 279B.

The booklet format, with small panes of stamps between thin cardboard covers, makes it convenient for postal customers to carry and store unused postage stamps. They remain clean and undamaged, even when carried in a pocket or purse.

Figure 1 shows a booklet of 20 29¢ Tulip stamps from 1991, Scott 2527. The complete booklet of two 10-stamp panes is identified as Scott BK185 in the Booklets: Panes & Covers section of the Scott U.S. specialized catalog.

The 25¢ booklet of 1900 contains two panes of six 2¢ stamps arranged two across and three down. A 49¢ booklet contains four such panes, and a 97¢ booklet holds eight panes. The extra charge of 1¢ per booklet was compensation for the extra cost of manufacturing and processing the booklets.

The panes are each separated by what writer John Luff described as "paraffined paper" interleaving to ensure that the adhesive stamps would not stick to one another. Interleaving was used in booklets until the 1970s, when the development of a synthetic dry or dull gum eliminated concerns about the stamp panes sticking together.

The stamps in that first booklet and in most U.S. booklets were perforated between the stamps but not around the outer edges of the booklet pane. As a result, every stamp in each booklet had at least one straight edge. Stamps in the outer corners of the panes (opposite the binding end) had two adjoining straight edges. Many collectors used this straight-edge characteristic to identify a U.S. booklet stamp.

The booklet panes of 1900 were manufactured with a short paper tab or stub at the top. After the stamps were positioned between cardboard covers, the panes were stapled through this tab to hold the booklet together. This binding process was used for many years by the U.S. Bureau of Engraving and Printing.

Booklet stamps actually existed before the 1900 issue appeared in U.S. post offices. Luxembourg began selling stamps in booklets in 1895, and U.S. telegraph companies had created booklets for their own stamps around 1870.

Most U.S. booklet stamps have been varieties of definitive issues that were sold in larger standard panes, usually of 100 stamps.

Stamp collectors generally take note of any variety that occurs on the issues they collect, so booklets and booklet stamps have long held collector interest.

The varieties grew even more pronounced when the 8¢ deep claret Eisenhower booklet stamp was issued in 1971. Although it resembled the blue-gray 6¢ Eisenhower stamp issued the year before in panes, booklets and coils, the 8¢ stamp in deep claret (a reddish violet color) was not available in larger nonbooklet panes, though it was manufactured in coil form.

Before long, a number of different stamps appeared with designs that could only be found in booklet form, including the 13¢ Flag Over Capitol of 1977 (Scott 1623).

Slogan labels appeared on U.S. booklet panes in 1962 when new booklets of 20 5¢ George Washington stamps were issued (BK110) in anticipation of a hike in letter rates effective Jan. 7, 1963.

Many collectors preferred saving only individual panes from booklets (for easy display on a stamp album page), and others saved what are known as exploded booklets. Exploded booklets were dismantled and carefully fanned out on a page to show at least part of each cover, pane and interleaf in the booklet.

To show the special nature of a booklet pane, collectors insist on saving separated panes intact with the binding tab attached to the edge of the pane.

This was difficult to do with glued-in panes, though collectors had some success removing panes from booklets using moistened cotton swabs to carefully dampen the tab so the adhesive would release.

Booklet tabs had for years shown identifiable markings of various styles. These tabs became even more interesting in 1981 when plate numbers were printed in the tab attached to the 18¢ American Wildlife pane of 10 different designs (Scott 1880-89).

Collectors searched post offices and traded with each other to obtain booklets that contained the markings and plate numbers they didn't yet have in their collections.

Plate numbers can be seen on the 29¢ Pledge of Allegiance booklet of 1993 with red denomination (Scott 2594) shown in Figure 3.

Many modern booklets contained larger panes that were folded between the booklet covers, and in 1988 the U.S. Postal Service began to offer never-folded booklet panes of the same issues that were sold folded between cardboard covers.

These varieties were offered for several years until the U.S. perforated booklet stamp program was discontinued in 1996. The perforated issues were shouldered out of the way by mailer demand for self-adhesive booklets, according to the Postal Service.

A flat pane of 18 25¢ Eagle and Shield stamps issued in 1989 is considered to be the first booklet of self-adhesive stamps, though there was a do-it-yourself factor involved. Mailers had to peel off and discard two narrow strips of self-adhesive paper to fold the flat pane into thirds. Such issues, including the 1999 Fruit Berries booklet shown at the top of Figure 4, came to be called convertible booklets by the Postal Service.

Prefolded booklets of self-adhesive stamps were also offered within a few years. The bottom of Figure 4 shows two popular varieties: with individual panes on liner paper, and with the inside of the booklet cover serving as the liner paper.

The U.S. Navy Submarines booklet shown in Figure 6 contains five different stamps along with pages of descriptive text and photographs, a so-called prestige booklet. The concept of the prestige booklet was pioneered by Great Britain in 1969 and has since been used by other countries. The U.S. version is a combination of something old (the perforated, gummed stamp) with something new (the prestige booklet format) to further interest booklet stamp collectors.

Stamps in booklet form have created uncountable varieties for collectors in the United States and many other countries as well. There's little doubt that as stamp technology continues to advance collectors will continue to see new and exciting items appear.