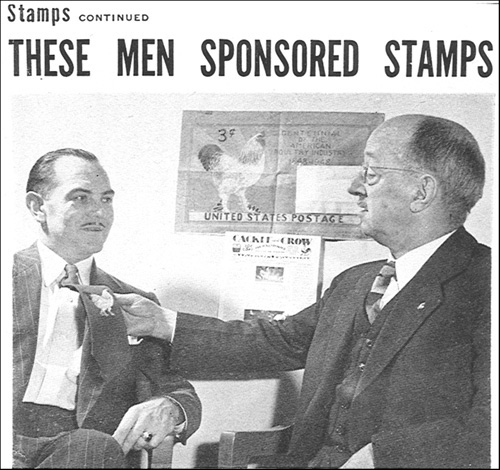 This picture from LIFE shows Connecticut Congressman Antoni N. Sadlak, left, sponsor of the 1948 Chicken stamp, with Paul Ives, editor of Cackle and Crow, organ of the poultry industry in the United States. 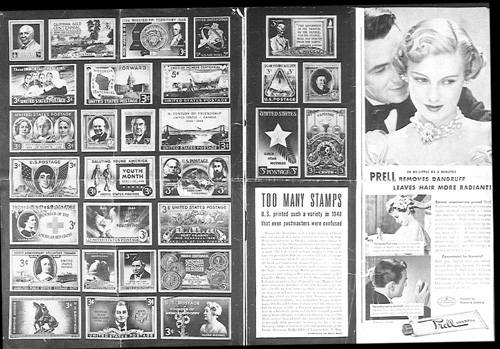 The United States Post Office Department created a stamp glut in 1948 by issuing 30 stamps at the request of special interests in Congress. LIFE magazine thought the 1948 stamp program was excessive and ran this article about it.
Previous
Next

Stamp gluts fascinate me. They occur when more stamps are issued than collectors can absorb. Many countries have overproduced stamps expecting to make money from collectors, and some have been quite successful. Every stamp that goes into an album instead of onto an envelope represents profit for a postal administration. Only when a stamp is used to mail a letter does its value get used up, paying for the salaries and pensions of postal workers, for the heat and light in post office buildings and all the other costs associated with the movement of mail.

Another term for these speculative stamps is "wallpaper." The meaning is obvious: they are thought to be good only for decoration. And some small nations that raise money for their national treasuries by selling animal, flower and butterfly stamps are called "postage stamp republics."It is a common belief that Third World countries have produced the biggest gluts with their attractive topical stamps aimed at collectors' wallets. For this reason, some issues are called "dunes," a word that is short for sand dune, signifying an arid country in the Middle East. One such government was the Mutawakelite Kingdom of Yemen, which produced a trainload of topical stamps during the 1960s and 1970s, so many that the collecting world still hasn't absorbed them.

The United States is not a postage stamp republic, but it has been responsible for stamp gluts and wallpaper.

The first stamp glut in U.S. history occurred in 1893 when the country was celebrating the 400th anniversary of Christopher Columbus' arrival in the New World. The Post Office Department issued a set of 16 Columbian commemorative stamps with a face value of $16.34, and a series of stamped envelopes in four denominations and 22 collectible sizes. Commemorative stamps generally are issued to note a special event, anniversary or subject.

At the time of the Columbian commemoratives, the nation was in the throes of a depression. The starting weekly wage for a man trained at a business college was $8 –– when he could find work. The Columbian stamps were appealing but simply too expensive. The American public, which had become accustomed to postage stamps half the size, thought the Columbians were too big and spurned them.

As late as the 1920s, high-denomination Columbians were still being sold in the stamp trade for face value. Their days as a nearly worthless speculative issue were almost over, however.

The election in 1932 of President Franklin Delano Roosevelt, a stamp collector, brought millions of new collectors into the hobby and laid the foundation for the next glut. It occurred in 1948, as can be seen from the LIFE magazine story, "Too Many Stamps" published the following year and shown in Figure 1. If LIFE believed there were too many stamps, who would disagree? Never before had so many stamps been issued honoring so many different subjects. A list of the 1948 stamp issues is given in the box below.

World War II ended with the nation on the brink of prosperity and a strong market for stamps. There weren't enough good, older stamps to go around, and some of the newer ones from the 1920s and '30s had been produced in small quantities. After a prewar push in 1940 that created the Famous Americans, a uniform set of 35 stamps, the nation's stamp-issuing policy turned conservative.

In 1941, only one commemorative was issued; in 1942, three. The Overrun Countries set of 13 flag stamps followed in 1943-44. Between 1944 and 1947, 30 commemoratives were issued, of which 13 were war-related. According to a congressional document that was sent to me by stamp dealer J. Cortese, only 10 stamps were scheduled to be designed and printed in 1948 by the U.S. Bureau of Engraving and Printing.

But three times that many were issued that year –– 28 commemoratives, one airmail commemorative and one regular airmail stamp, for a total of 30.

LIFE wrote: "Many of them were ordered by members of the 80th Congress who felt the need to butter up their constituents in an election year and were eager to pay their respects to suffragettes, Turners, volunteer firemen and chaplains –– not to mention Texans, Californians, Swedes and Indians.

"Congressmen who themselves had no stamps to offer at this time approved the legislation in a brotherly spirit and thereby curried goodwill among their colleagues for the next election year of 1950.

"Then, in their hour of need, they will presumably be able to persuade their associates to return the favor in honor of such vital institutions as the Friday Afternoon Bridge Club of Cannon Ball, N.D."

LIFE's bold irreverence stemmed from some of the stamp subjects. One in particular brought howls of glee from those who thought the USPOD had gone over the deep end.

To this day, the U.S. stamp that is most often mentioned as the least necessary is the 1948 issue depicting a rooster and commemorating the 100th anniversary of the American poultry industry. The Chicken stamp, as it has been called ever since, was sponsored by Connecticut Congressman Antoni N. Sadlak and issued in New Haven. A picture of politician and stamp is shown in Figure 2.

The 1948 stamp program made such an impression on me that I began to search for covers that had been mailed using the 1948 stamps. Not just ordinary 3¢ covers but ones with some pizzaz.

An exhibit is taking shape. The working title is "The Glut of 1948: Wallpaper at Work." I'll be back in this space next week to show you some samples.