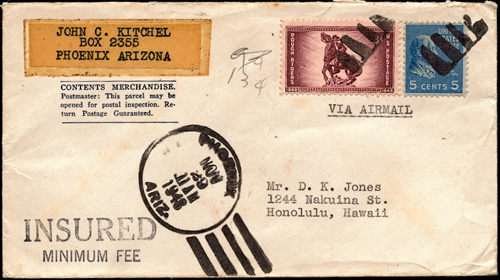 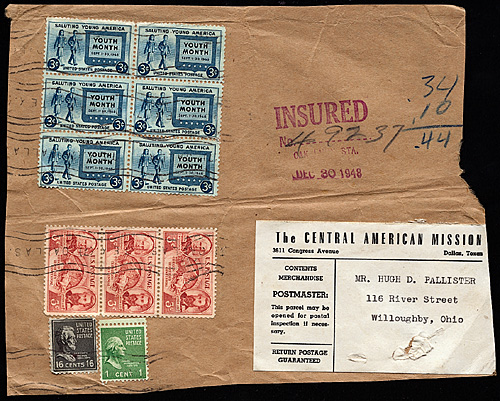 The sum of 49¢ in stamps on this parcel front indicates that the package weighed 5 pounds and was insured for contents valued at $5 to $25. It was sent Dec. 30, 1948, from Texas to Ohio. A block of six of the 3¢ Youth stamp was paired with a strip of thre 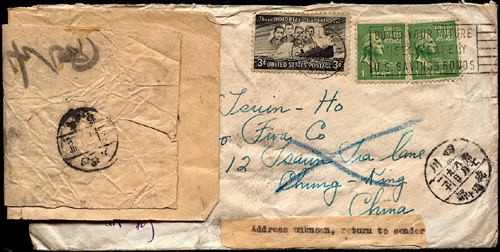 The 3¢ commemorative shown on cover here was one of 121.9 million 3¢ Four Chaplains stamps issued May 28, 1948. Two 1¢ Presidential stamps helped pay the 5¢ international surface rate from Brooklyn, N.Y., to Chungking, China, in July 1948. The letter was 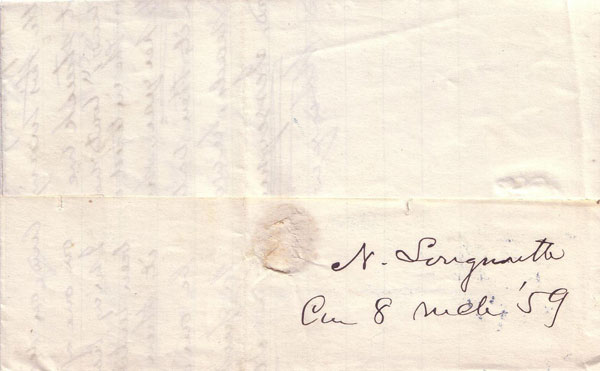 The 3¢ Women's Progress stamp shown on this postcard sent from Vermont to Austria in August 1948 is one of 117.6 million issued. Postwar mail censorship in Austria is indicated by the circular imprint in the lower-right corner.

The 3¢ George Washington Carver commemorative was the first stamp issued in 1948. A total of 121.5 million were printed. Here five are used with a $2 stamp from the Presidential series on a registered bank-mail tag.
Previous
Next

In last week's Refresher Course, I told how the United States Post Office Department created a stamp glut in 1948 by issuing 30 stamps: 28 commemoratives, one airmail and one airmail commemorative. That's nothing, you say, and you're right, of course. By today's stamp-issuing standards, almost anything goes, but back then, 30 stamps were like 300 now.

Many of the covers that survive from the 1940s have come from the estates of collectors who saved them because the covers were unusual. Often they were part of a correspondence between collectors, or they are found on envelopes sent from dealers to collectors.In studying the glut of 1948, I got so interested that I gave myself a challenge about a year ago. I set out to find the best commercial uses of each of the 1948 stamps. By commercial use, I mean letters or packages mailed by businesses or people who weren't necessarily stamp collectors.

You'd think with 2.2 billion commemoratives issued in 1948 –– see last week's chart –– that bona fide, noncollector uses on cover would be abundant. They are not, or at least I haven't found them so.

In 1948, the rate to send a postcard overseas by ship was 3¢, the same as it cost to mail a domestic letter. Surprisingly, however, few commemoratives are found on international postcards.

Two 1¢ Presidential series stamps helped pay the 5¢ international surface rate from Brooklyn, N.Y., to Chungking, China. The letter, mailed in July 1948, was returned to the sender because the addressee was not known.

Figure 4 shows the front of a parcel bearing 49¢ in stamps. The sum indicates that the package weighed 5 pounds and was insured for up to $25. It was sent from Texas to Ohio Dec. 30, 1948.

A block of six of the 3¢ Salute to Youth stamp is paired with a strip of three 3¢ Oregon Territory stamps. The two stamps were issued within three days of each other, on Aug. 11 and Aug. 14, respectively. Such commemoratives are not commonly found on parcels.

Old-time Ohio collectors will recognize the recipient, Hugh Pallister, as one of their own. It is likely that the package, which had been sent to Pallister by the Central American Mission, contained 5 pounds of on-paper stamps carefully clipped from envelopes by church ladies. Such shipments are called mission mixtures.

On Jan. 1, 1949, less than five weeks after this letter was mailed, the domestic airmail rate increased to 6¢ per ounce, coupled with an increase in fees for such services as special delivery and registry.

Those increases add another dimension to collecting the 1948 issues, since the commemoratives released that year were sold in post offices to mailers for up to two years. Later uses of the stamps reflect the higher rates and fees.

The stamp glut of 1948 was roundly blamed on Congress, whose members scratched the backs of special interests by getting stamps issued for their various causes.

According to a report adopted April 26, 1949, by the Senate Committee on Post Office and Civil Service, the pork-barrel outpouring of issues in 1948 "created confusion in the administration of the commemorative stamp program, caused expensive overtime for engravers and printers [in the U.S. Bureau of Engraving and Printing], deferred printing of needed precanceled and coiled stamps, and jeopardized the production of the requisite number of 1½¢ and 3¢ stamps for holiday mailing."

This last statement rings hollow. Because 27 of the 28 commemoratives issued in 1948 were 3¢ stamps, the public had plenty to draw on in time of need.

For a while there were fears that the 1948 stamp extravaganza would be repeated the following year. During the early months of 1949, more than 60 resolutions for new stamps were proposed in Congress, and the number was expected to top 200 by year's end. Members of the Senate post office committee called on the postmaster general to reassert his authority over the stamp-selection process and hold new issues to no more than 12 a year. And that's just what happened. In the backlash to the glut of '48, only 11 stamps were issued in 1949.

The legacy of the glut was a prolonged period of speculation. Entrepreneurs encouraged the public to buy the new issues in panes and stash them away for expected profits. Most experienced stamp collectors knew that this was too good to be true. There were simply too many commemoratives issued to offer any potential for a payoff.

It was noncollectors who lined up at post office windows and created the enormous stockpiles of 3¢ commemorative panes that last to this day. Each pane represents a lost dream for someone whose heirs discovered the bitter truth when they sold them at a loss. Not so with the covers. They're full of life today and have fine stories to tell.