Figure 5. Stamp camp 2001 would not have been complete without a tour of the old match factory in Bellefonte, Pa. 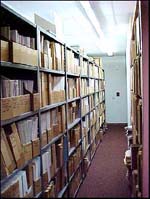 Figure 4. Students also like to spend time seeing what is in the overflowing stacks of the American Philatelic Research Library.

Figure 3. Many seminar students take advantage of free time between classes to pore through circuit books at the sales division in the APS headquarters building in State College, Pa. 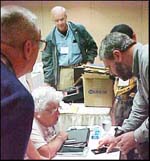 Are you looking for a fun, relaxing experience that will expand your collecting horizons and help you forge new friendships? Do you yearn for the chance to immerse yourself in stamps, along with a small group of fellow collectors? If you answered with an enthusiastic "yes," then the American Philatelic Society's annual summer seminar on philately might be just the answer for you.

I attended the 22nd consecutive summer seminar June 24-28 in State College, Pa., home to the APS. This year's seminar was held at the Atherton Hotel, in the heart of State College and just south of the main campus of Penn State University. The seminar kicked off with a reception and dinner Sunday evening. It was most enjoyable meeting the other students in a relaxed setting, especially after nearly eight hours of driving.

Of course, the main reason for coming was the six available seminar courses. Three of the courses were new: "Proofs, Essays and Philatelic Literature" taught by James Lee; "Philatelist's Progress," emphasizing the lighter side of stamp collecting, by Bill Welch; and "Stamp Camp –– Reaching Out to Kids With Exhibiting" by Cheryl Edgcomb.

I opted for "Stamp Technology," because I felt it would strengthen my stamp knowledge in many areas –– a big plus when you write about stamps for a living. Geared to intermediate-level collectors, the course covered a broad array of topics, including: printing methods, watermarks, papermaking and paper types, stamp design, perforation methods, color, luminescence (tagging), gum and stamp identification.

Each student was provided with a 3-ring binder filled with numerous helpful articles and pictures geared to the course topics. More importantly, many of the topics allowed for hands-on practice.

Whenever possible, stamps were used to illustrate key points or concepts. For example, we were given a handful of stamps and asked to identify the method used to print each stamp –– lots of fun.

After the discussion about watermarks (thinned areas on paper, deliberately incorporating a design during production as a security feature), we practiced finding them on real stamps. As Figure 1 shows, students observed how to detect a watermark using a watermark tray and fluid. The end of the course featured a tour of the Penn State print-services facility. Here the class saw modern printing equipment and techniques similar to those used to print stamps.

Overall, I heartily recommend "Stamp Technology." It is four fun days of talking about and studying nothing but stamps. What more could a collector want? Each course had a morning session and usually a workshop in the afternoon.

Also, there was plenty of time built into the week's schedule for optional activities and free time. One option was an afternoon field trip to Subway Stamp Shop in Altoona, Pa., about 45 minutes south of State College. Mel and Virginia Goldberg's cavernous warehouse and shop is a veritable treasure trove of stamps, supplies and literature.

The highlight of the tour, for me, was getting a peek at the Dennison hinge machine that Subway purchased and is currently refurbishing. The machine is pictured in Figure 2. The Goldbergs are attempting to use the contraption to produce hinges that will rival the marvelous peelability of old-time Dennison hinges. According to the Goldbergs, the tough part is finding just the right gum formula for the glassine paper used to make the hinges.

As a nearly 10-year member of the APS, I was thrilled to visit APS headquarters for the first time during the seminar. I met many of the APS staff members and was treated to a tour of the building from Gini Horn, librarian of the American Philatelic Research Library.

A highlight was spending a couple of hours in the sales division, poring through drawers of sales books without interruption. Normally, an APS member receives sales circuits in the mail. Each contains up to a maximum of 10 books.

Circuits are not sent automatically –– an APS member must ask to be placed on a circuit mailing list. Each book contains stamps, covers, or other philatelic items offered for sale by the owner of the circuit book.

The sales division acts as the middleman between seller and buyer by documenting the contents of each sales book and tracking each circuit as it moves from one member to another through the mail. A member sends payment for items removed from each book directly to the sales division, which then pays the seller.

It's a reliable system, but rather slow. I typically receive four or five circuits a year in the mail. Thus, it was a real treat to sit down and look at so many circuit books in a relaxing setting.

When I walked into the sales room, I saw several students peacefully hunting, as shown in Figure 3. There was little or no conversation –– just the muffled rustling of turning pages. That afternoon, I looked through dozens of books and found several stamps for my Ireland collection. Among these were several attractive prestige booklets, featuring panes of colorful stamps, along with photographs and informative text.

During my tour of the APRL, Gini Horn made a point of showing me how little space is left for new acquisitions. The stacks have been inched closer together over the years, and books, magazines and other items often end up on the top of the shelves, as shown in Figure 4. But the tight quarters didn't prevent students from taking advantage of one of the finest philatelic libraries in the United States.

Some seminar participants conducted research for building a new exhibit or updating a current one. Other students used the library for classwork. For instance, students in Varro Tyler's forgeries class tested their newly acquired skills by using library resources to determine if a stamp was genuine or not.

"The stamps the students must research are not ones we discussed during the course," Tyler told me. "They have to dig into the literature and discover the diagnostics used to separate the genuine from the fake. Many forgeries are easy to spot, once you know what to look for. And it's so much fun. I enjoy teaching at the seminar and interacting with the students," Tyler said. I met Tyler for the first time at the seminar and found him most engaging. No doubt others feel the same way, for his course has been a seminar favorite for more than a decade.

Another interesting option open to students was a tour of the 19th-century match factory in nearby Bellefonte, Pa. The APS wants to renovate the match factory, illustrated in Figure 5, for a new headquarters. The massive brick structure is composed of 18 interconnected buildings with an aggregate size of 125,000 square feet, five times the size of the present APS building.

I and several students toured the building with APS executive director Bob Lamb and APS project manager Dennis Gilson. The building needs, to put it mildly, a great deal of work, but its charm and historical significance could make it an excellent site for the nation's largest stamp club.

A handful of useful electives also were presented throughout the week. One of the most popular was Ken Lawrence's "Cheap Tricks for Expertizing U.S. Stamps." "The typical U.S. fake is a manipulated stamp. There are fairly few counterfeit U.S. stamps," Lawrence stated. Lawrence noted that common, inexpensive stamps are altered to make them look like much more valuable stamps.

He then presented a number of very inexpensive methods to detect such altered stamps. Most involved comparing the stamp in question to an inexpensive reference stamp with similar characteristics. "These techniques won't necessarily turn you into a professional expertizer, but they can help you separate some of the chaff masquerading as wheat," Lawrence said.

The seminar ended Thursday evening with a banquet and an informative presentation from Meg Ausman, historian for the United States Postal Service.

Make plans to attend next year's summer seminar, scheduled for June 23-27, 2002, in State College. You'll have a fantastic time and learn a great deal.