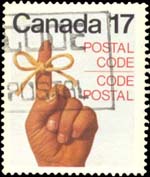 Figure 2. Four incarnations of the nimble cartoon mailman, Mr. Zip, as he has appeared over the years. 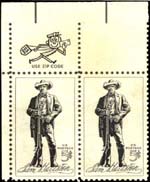 At my mother's knee, I was carefully taught my name, telephone number and full mailing address, ending with "Pittsburgh 14, Pa." In retrospect, I wonder about this. If lost, was I to write home and ask for help? Alternatively, could I address myself, crawl into any mailbox and be returned home postage paid, like a hotel key?

In any event, my point is how completely the idea of an arbitrary numerical element (a postal code as part of a home address) had been accepted by the 1950s in the United States. My parents grew up in the era when it was still possible to simply write "City" after the house number and street name on a mail piece, and have it delivered the next day.

An experimental postal zoning system had been tried in some U.S. cities even before May 4, 1943, at which time 178 of the largest urban areas received a one- or two-digit number, to be placed after the city name and indicating the postal delivery district.

The 1943 plan, the District Delivery Number system, was a wartime expedient, enabling fledgling postal clerks replacing those lost to military service to sort mail easily by zone number. Two decades later, 75 percent of first-class mail in the United States was generated by a handful of large-volume mailers. The Post Office Department devised a plan to speed handling and delivery of letter mail.

By the early 1960s, automatic data processing equipment was in general use in large American businesses. The POD realized that volume mailers could use the equipment to sort bulk mailings by postal code sequence, bundle it accordingly and deliver it to the post office. This method allowed mailings to bypass as many as six mail-handling steps.

The ZIP code project was announced by Postmaster General J. Edward Day in November 1962, to go into effect on July 1, 1963, the 100th anniversary of free city delivery of mail in the United States. ZIP, an acronym for Zone (or Zoning, depending on which version you read) Improvement Plan, also means to move with speed and vigor.

The five-digit code was to be placed after the state name in an address, rather than between the city and state names, as the old two-digit codes were. The numbers indicated the travel path of the mail piece as well as the addressee's location.

The five digits of the 1963 ZIPs broke down in this way: the first numeral, 0 to 9, stood for one of the 10 national postal service areas; the second and third numbers were for the postal sectional center hub or transportation center for mail within that area; and the last two numbers were the existing local city postal zone number or a town post office. Thus, my childhood home address became "Pittsburgh PA 15214."

The POD hoped for volume-mailers' voluntary cooperation (there were no sorting discounts for mailers until the late 1970s), but ZIP codes also were an important step in the post office's 10-year plan for increased automation.

The plan also answered a need to realign mail transport routes that relied far more on airplanes than on trucks, much less the trains of yesteryear. Postmaster General Day had been warned that the new code might be a tough sell. On an airplane trip Day was seated next to the chairman of the board of AT&T. Day mentioned the new postal project, and the AT&T executive cited public complaints following the introduction of all-digital telephone numbers and area codes.

Philatelic writer Belmont Faries described the launching of the ZIP program as one of the most intensive promotion campaigns the nation had ever seen "aside from war bonds." The scrawny, bug-eyed Mr. Zip was on announcements mailed to 72 million addresses, on buttons worn by 50,000 window clerks, on uniforms of 125,000 letter carriers and decals on 400,000 mailboxes. Ethel Merman belted out a Mr. Zip song aired on radio nationwide. Mr. Zip made the newspapers, magazines, television and billboards.

To this day, the little fellow is a revered figure in advertising history. Changing Timesmagazine wrote in 1968 that most trademarks and symbols take years to be recognized, but that in less than five years surveys showed that 80 percent of the public knew what Mr. Zip stood for. The magazine said that he was "right up there with Smokey the Bear."

To the pleased surprise of the POD, the public was very responsive to using the new system, despite the occasional grumble about dehumanization and "Big Brother" taking over (a reference to George Orwell's 1984). Within three years more than 44 percent of the mail bore ZIP codes. By 1985, there was almost no unZIPped mail in the U.S. mailstream.

For stamp collectors, Mr. Zip opened a new specialty area in the hobby. Six months after the launch of the project he appeared on the margin of a U.S. stamp. The 5¢ Sam Houston commemorative stamp of 1964, Scott 1242, shown in Figure 1, carried the running Mr. Zip figure in the selvage, with the slogan "USE ZIP CODE."

The standing Mr. Zip first appeared on the 5¢ New York World's Fair stamp, Scott 1244 issued on April 22, 1964. Other versions over time included a skinny Mr. Zip, only his head, white or shaded clothing and various slogans with and without a circled "R" indicating a registered trademark. Four varieties of the cartoon postal icon are shown in Figure 2.

The Zippy Collectors Club was formed in 1972 to provide a forum for information among Zip devotees, but collector interest declined over the course of the decade, as did the Postal Service's. With ZIP code usage almost total, there was no need for further public urging, and mass mailers were required to presort by ZIP codes.

Thus, it is puzzling why the 10¢ Mail Transport stamp featuring the words "ZIP CODE," Scott 1511, shown in Figure 3, was issued Jan. 4, 1974. The design was based on a USPS poster representing various forms of mail transport. Both the poster and the stamp carried the slogan "It all depends on ZIP code."

In 1981 the USPS extended the ZIP code system to nine digits, ZIP+4, with the additional four numerals pinpointing an address down to its neighborhood block. There is even a ZIP+6 sequence, which signals to a carrier where the piece of mail belongs along his delivery path. The ZIP-plus codes were not meant for general use and they were not publicized. Mr. Zip had worked himself out of a job. The little cartoon mailman retired in 1986.

Germany launched the idea of postal codes in the 20th century with its two-digit system devised in 1943. This system has been broadly revised several times, most notably when East Germany and West Germany were reunited.

As early as 1857, London was divided into eight postal districts with letter codes representing compass points. The British system was modified and expanded, and by 1974 postcodes had been assigned to all of the United Kingdom. British postcodes are promoted by the July 2001 slogan cancellation on two 45-penny stamps on piece shown in Figure 4.

As population and automation have grown, dozens of countries have adopted numeric or alphanumeric codes to define regions for postal purposes. France, for example, began a two-digit postal code system in 1965, moving in 1972 to a five-digit code. Sweden and Spain also use five-digit codes. Four-digit-and-two-letter postcodes began use in the Netherlands in 1978.

Canada based its postcode on the British system. The 17¢ stamp from 1979, Scott 816, shown in Figure 5, reminds Canadian postal customers to use their new postcodes.

Bee topicalists as well as postal code collectors will enjoy the Danish 1.30-kroner University Seal stamp on piece tied by a datestamp and slogan cancel, shown in Figure 6, which depicts a round-eyed Mr. Zip-like bumblebee.

Speaking of Mr. Zip look-alikes, when Japan launched its postal code system on July 1, 1968, the U.S. stamp press matter-of-factly said, "Mr. Zip has arrived in Japan." Mr. Zip's Japanese cousin is shown in Figure 7, next to the 15-yen Mailbox and Postal Code Symbol stamp, Scott 998, issued on the first anniversary of the Japanese postal code.

Postal code collectibles also may include official postal markings, such as the "MAIL DELAYED DUE TO INCORRECT ZIP CODE" marking on the Israel to Washington cover shown in Figure 8. Social scientists, especially geographers, have noted with interest that postal codes, intended to move the mails more efficiently, have many other applications.

For example, insurance coverage areas may be defined by their postal codes; carrier services other than the post office use postal codes to route parcels; marketers use postal code data to define customer markets and target advertising. ZIP codes can even be status symbols as in the one publicized in the popular television series Beverly Hills 90210.

The book Postcodes: The New Geography, compiled by Jonathan Raper, discusses this subject exhaustively. American Philatelic Society members may contact the American Philatelic Research Library for borrowing information at 814-237-3095, or through the web site www.stamps.org.

Postal codes continue to serve important purposes even as they can lead to interesting additions to a stamp or postal history collection. Is it time to put some ZIP in your albums?