Postally used examples of this 29¢ Official Mail envelope are hard to find even though it is less than 10 years old. 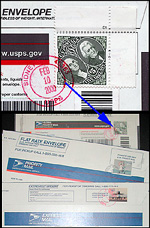 A recent U.S. mailed envelope bearing postage paid by a computer-printed label with Internet postage. Usage of Internet postage has been valid for less than three years.

What arrives in your mail today may be the showpiece of an award-winning postal history exhibit someday.

Stamps and letter-post mail have been going through innovations almost continuously since perforations were added to stamps in the 1850s. Today changes in stamps and mail delivery occur almost daily as technology affects some of the most important aspects of our hobby.Because the traditions of stamp collecting go back about 150 years or so, people sometimes forget that postal history can be as current and vital as today's mail. It is part of a collecting area known as modern postal history.

Twenty years ago, who would have anticipated the overwhelming use of self-adhesive stamps, the appearance of hologram stamps and postal stationery, or the use of home computers to track mail delivery and print postage directly onto envelopes?

Changes in postal service often keep pace with the incredible changes we all see in the world around us.

But modern postal history isn't just about technological leaps and bounds and gee-whiz special effects. It is also the serious examination of the stamps, rates and delivery services that we have experienced in recent years and that extend to the present day.

Those who choose to collect modern postal history look for covers — mailed envelopes, postcards and similar mailed items — showing the many ways various rates are fulfilled.

Collecting modern stamps and covers is a field that continues to grow in popularity as collectors realize they have opportunities to make new discoveries in areas yet to be explored.

Some of these discoveries are as familiar as similar discoveries made decades ago. Perforation varieties (and now, die cut varieties on self-adhesive stamps), new plate numbers, color variations and the like still happen today.

Figure 1 illustrates a discovery made only weeks ago: the existence of two different die cuts on the nondenominated (34¢) Four Flowers self-adhesive stamps from a double-sided pane of 20 issued by the United States Dec. 15, 2000.

Collector Gregg Greenwald of Wisconsin noticed the differences and reported the information to Linn's Stamp News, where it was published on page 30 of the Feb. 5 issue.

Two examples are shown as they appear on complete postally used envelopes. The stamp at top has a die cut gauge (or measurement) of about 10¼ x 10¾; the stamp shown below it has a gauge of about 11½ x 11¾.

The gauge describes the number of peaks (or valleys) in the wavy-line die cuts within the space of two centimeters. The first number is the gauge across the top and bottom of the stamp, and the second number measures the vertical die cuts.

A simple rulerlike tool called a perforation gauge (such as Linn's Multi-gauge) is used to measure these cuts.

When stamps of the same design show a significant difference in perforation gauge, the stamps are identified as different issues, even though they look a lot alike.

Just deciding what is modern postal history and what is traditional requires some thought. In part, it depends upon your perspective.

To a specialist collector of the U.S. stamps of 1847, anything issued later than the 1847 reproductions created in 1875 may be too modern to interest him.

To the collector who joined the hobby when the Celebrate the Century commemorative series began in 1998, the Transportation coils of 1981 may seem like old stamps.

The American Philatelic Society issues a number of research awards to exhibitors of United States stamps, and the awards recognize exhibits from various eras.

Even if you look at only the events of 1980 to date, many exciting collecting fields open for consideration.

The first chapter of Linn's World Stamp Almanac provides a calendar list of significant events in the history of the world posts. Thirty events are listed between 1980 and 1998, including the first hologram stamp in 1988, the introduction of sprayed-on routing markings in 1989 and the 1998 initial test of computer-generated postage imprints.

Although some of the firms first involved in developing computer-postage have since left the market, Figure 2 shows an example of how computer-printed postage has progressed. Printed on a die-cut label bearing a curved luminescent pink bar, this example from stamps.com was printed Dec. 28, 2000, by a mailer in Lebanon, Ore.

A collection of covers showing computer-generated postage labels could include a variety of examples, including adhesive labels and direct-on-envelope printing, from the different companies that have participated in the market.

Collectors watch for postally used envelopes that carry these stamps. Most desirable are examples that use the stamps to properly pay a specific rate, such as the 35¢ Charles R. Drew stamp of 1981 used to pay the 2-ounce rate in effect that year from March 22 to Oct. 31.

In the United States, domestic and international expedited mail services have all developed within the past 20 years. Figure 3 shows three envelopes that document (from top to bottom) the proper use of Global (international) Priority Mail, domestic Priority Mail and domestic Express Mail.

In this illustration, each example uses a single stamp to precisely pay the required postage fee.

For example, the small Global Priority Mail envelope at top was delivered to Europe in 2000 using the 1994 $5 Washington and Jackson stamp that is still current today. At the time of mailing, the fee for this service was exactly $5.

Many collectors will soak stamps from envelopes such as these to add the stamps to their albums; but to preserve postal history, many will save the entire envelope to show how and when the stamp was used.

Another interesting single-stamp example is shown in Figure 4. Finding a single Happy New Year stamp to pay postage for a letter might not seem unusual, but the 29¢ Year of the Boar stamp was issued Dec. 30, 1994, only two days before the domestic letter rate increased to 32¢.

Some collectors quickly prepared covers to mail (and save) during the two-day practical life of the stamp. Complete mailed envelopes bearing postmarked Year of the Boar stamps from Dec. 30 or Dec. 31, as shown in Figure 4, are keepsakes that serve as evidence of the stamp's proper postal use.

Postally used examples of some modern U.S. issues are hard to come by. Several Official Mail stamped envelopes are scarce, as there are a limited number of federal agencies using the envelopes, and most recipients simply tear them open and discard them.

As postal services change with the times, there will be more and more changes in how mail delivery is accomplished, and how stamps are used to pay for mail delivery and related services.

Always keep an eye on the current postal events reported in Linn's Stamp News. It may be your chance to jump into a new collecting field just as it begins.