Stamps, the hobby that offers you the world

The two stamps shown above will teach you the identity of the third U.S. president and the year California became a state. Postage stamps are great educational tools. 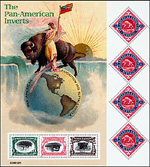 If you were to choose a starting point or an ending point for your U.S. stamp collection, consider this Pan-American Inverts commemorative pane planned for 2001. 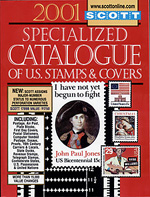 The 2001 Scott Specialized Catalogue of United States Stamps and Covers. A good catalog helps you learn about the stamps you collect.

Postage stamps can take you on a trip to the beginnings of time with the 1957 3¢ International Geophysical Year stamp from the United States (left), or into the future with one of the 32¢ Space Discovery stamps of 1998 (right).

The seven continents and the wide world of stamp collecting are represented by these seven stamps, showing Asia (on a 1986 stamp from Indonesia), North America (1996 Canada), South America (1985 Chile), Europe (1996 Portugal), Australia (1981 Australia),
Previous
Next

How many fun hobbies can you think of that have existed for more than 150 years? How about one that helps you learn, improves your manual dexterity, encourages you to express your creativity, lets you spend time alone or with friends, can relax you or get you pleasantly excited, and costs as much or as little as you want? Stamp collecting fits all those descriptions and more.

A stamp can take you as far back in history as the creation of Adam, shown on the 1958 3¢ International Geophysical Year stamp issued by the United States (Scott 1107), at left in Figure 2.If you don't have an opportunity to take a world cruise, the stamp hobby can take you to every country in the world, including many that no longer exist. Just look at the diverse stamps shown in Figure 1, representing every continent on the planet.

Or it can take you deep into a fantastic future where a trip to another planet is as effortless as looking at one of the U.S. 1998 32¢ Space Discovery stamps (3240), shown at right in Figure 2.

If you enjoy assembling puzzles, stamp collecting is one of the biggest puzzles of all, with half a million pieces waiting to be put together. If you like to read, stamp collecting can lead you to examine any area that interests you. Stamps will probably get you started in subjects that you never even knew existed.

People get interested in the stamp hobby for a lot of different reasons. Most of those folks have a natural inclination to collect, and stamps are just about the perfect way to satisfy the urge.

That's because the stamp collector deals in sets and series, single countries, groups of countries, or definable topics, such as dogs on stamps, dancing on stamps or even stamps on stamps.

If you like to collect, it's always nice to know that you can find or set boundaries for your collection. Or if you want, you can ignore all the boundaries and just collect everything in sight.

You can plot the expanse of your own collection. Do you just want to save the stamps of the United States? It's easy to get started. Find a solid United States stamp catalog to help you identify stamps. A good choice is the Scott Specialized Catalogue of United States Stamps and Covers, shown in Figure 3. Or ask your stamp dealer to recommend a catalog.

One way to arrange your collection is from the first U.S. stamps of 1847 all the way to the 34¢ American Illustrators stamps that came out last week. It's a big job, but you know where your collection begins and where it is going, and you know what belongs in it and what does not.

Is every U.S. stamp too much for you? Remember, you don't have to be in any hurry: stamp collecting is the hobby of a lifetime. If you want to narrow things down, though, consider collecting only the stamps of the 20th century.

How's this for an idea? Start your collection with the Pan-American Exposition issue of 1901, and end it with the Pan American Inverts commemorative pane that will be issued March 29, 2001, shown here in Figure 4.

That will only eliminate about 300 stamps from your U.S. collection, but it saves you from having to go after the 1867 1¢ blue Benjamin Franklin Z grill stamp (Scott 85A).

As far as anyone can tell, there are only two 1¢ Z grills out there. One is in the collection of the New York Public Library, and the other was purchased in 1998 by Donald Sundman of Mystic Stamp Co., with the help of his young son Zachary, for just a shade under $1 million. That American stamp treasure is shown in Figure 5.

If you're a new collector, you may want to begin your collection with those brand new Pan-American stamps and continue on from there. That's another good idea.

You can choose to collect only U.S. airmail stamps, or only U.S. postage due stamps, or you can travel around the world and collect the stamps of Mongolia, Ireland, Brazil or Sudan.

What about all those claims made at the beginning of this column? Let's see what that's all about. Can stamp collecting help you learn? Probably more than any other hobby on the planet.

Stamp collectors often excel in history and geography because of what they learn about their postage stamps. Who was the third president of the United States? That's Thomas Jefferson — he's on the 3¢ Presidential stamp of 1938 (Scott 807, shown at left in Figure 6).

By the way, the tenth president, John Tyler, is on the 10¢ stamp in the same series. Among the Prexies, as those stamps are known, the denomination of the stamp matches the president's position in history through the 22¢ stamp, which shows the 22nd president, Grover Cleveland.

When did California become a state? In 1850. That's easy because the 33¢ California Statehood Sesquicentennial stamp shown at right in Figure 6 was issued in 2000. What's a sesquicentennial? Stamp collectors know that answer too, because so many stamps mark them: It's an anniversary of 150 years.

So how does stamp collecting improve your manual dexterity? Try picking up a postage stamp with a pair of stamp tongs. If you do it often enough, eventually you'll be able to put your stamps into a stock book blindfolded. But keep your eyes open while handling your stamps, just to be safe.

Your creativity is nourished in many different ways. Some collectors design their own stamp album pages, exhibition pages, first-day covers and more. Others look for interesting ways to team up information and articles about stamps with pages showing the stamps themselves.

Topical collectors look for creative connections to their main collecting interests. If you'd like a little solitude in your life, a quiet place to relax and unwind, stamp collecting can be that for you. If you enjoy the companionship of friends who have the same interests as you, your local stamp club can offer that as well.

Stamp collecting provides a peaceful outlet, but it can be as exciting as an unexpected gold strike. Linn's Stamp News regularly publishes stories of thrilling news in the stamp world.

A page 1 story by senior editor Rob Haeseler in the Jan. 22 issue described how a collector who had a common but unusual 2¢ stamp in his collection for 36 years learned that it was a scarce perforation error worth thousands of dollars.

Most collectors aren't quite so lucky, but there's always a chance you'll come upon a rare find, an unusual usage, or simply a terrific showpiece that's just perfect for your collection. There's a lot of satisfaction in that.

Finally, you can become a stamp collector for just pennies a day, as they say, or you can spend thousands of dollars on a single stamp. That may be one of the most attractive elements of the stamp hobby. You can pick up a bargain basement collection or accumulation of stamps and spend hours identifying and arranging the stamps, learning as much or as little as you like, creating your album pages and enjoying something that you are creating: enjoying it today, tomorrow and for years to come.

How much you spend on your collection doesn't make you a successful collector. If you love what you're doing, then you're as successful as they come.