Hail to the chiefs in your stamp collection 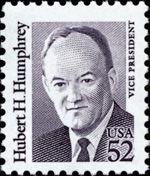 Thirteen vice presidents have been pictured on U.S. postage stamps, but Hubert H. Humphrey is the only one of those 13 who did not reach the office of president. The 52¢ stamp shown here was issued in 1991. 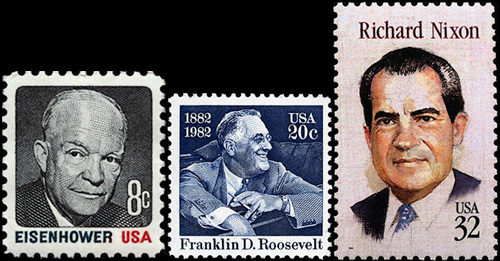 The United States issues different kinds of stamps to honor its presidents. At left is an 8¢ definitive stamp for Dwight D. Eisenhower. In the center is a 20¢ commemorative stamp honoring Franklin D. Roosevelt. At right is a 32¢ memorial issue (also a com

Among the many foreign countries that have issued stamps honoring United States presidents are Poland (left, showing a 1975 stamp depicting George Washington), San Marino (center, with a 1959 stamp for Abraham Lincoln) and Germany-Berlin (right, with a 19 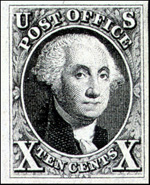 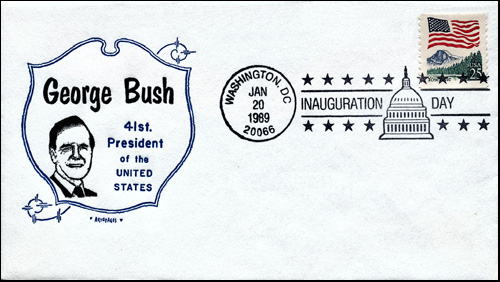 United States presidents have appeared with great regularity on stamps and souvenir covers, not only from the United States but also from many other countries around the world.

When George W. Bush is sworn into office Jan. 20, many stamp collectors will create or purchase souvenir covers that mark the historic event.Following the U.S. presidential election held Nov. 7, 2000 — one of the closest contests in the country's history — the people of the United States waited for 36 days to learn who would become the nation's 43rd president.

The United States Postal Service usually provides a special Inauguration Day pictorial cancellation for use in Washington, D.C., and a few other locations associated with the lives of the president-elect and vice president-elect.

Figure 1 shows a cacheted inauguration day cover from 1989 honoring the father of the president-elect.

George Bush (George Herbert Walker Bush) served one four-year term (1989-93) as the 41st president of the United States. The cachet (pronounced "ka-SHAY") in this case is the design on the left side of the envelope.

This souvenir is not a first-day cover, which would mark the day of issue for a new stamp. The 25¢ Flag Over Yosemite coil stamp used on the 1989 inauguration cover was simply chosen for its patriotic theme. It was placed on sale May 20, 1988, several months before the 1989 inauguration.

Unlike many other countries, the United States does not issue a special postage stamp when someone new assumes the position of head of state.

When the first U.S. postage stamps were issued in 1847, it was decided not to show the sitting president, James K. Polk. Instead, the two stamps pictured the country's first postmaster general, Benjamin Franklin, on the 5¢ value, and its first president, George Washington, on the 10¢. The 10¢ Washington stamp of 1847, Scott 2, is shown in Figure 2.

Washington has proven to be a popular figure on United States stamps. For many years without fail you could walk into any U.S. post office and there was always a George Washington stamp of one denomination or another available for purchase.

The Scott Specialized Catalogue of United States Stamps and Covers lists more than 265 U.S. George Washington stamps, many of them varieties of the complex Washington-Franklin definitive stamp series of 1908-21.

The first U.S. president is so universally admired that his image adorns more than 200 postage stamps from more than 60 different countries. Shown at left in Figure 3 is just one example, a 4.90-zloty stamp issued by Poland in 1975, Scott 2122a.

Other U.S. presidents have received similar honors from countries around the world. Also shown in Figure 3 is a 5-lira stamp issued by San Marino in 1959 to honor the 16th president, Abraham Lincoln (Scott 433), and a 40-pfennig stamp issued by Germany for the city of West Berlin, honoring John F. Kennedy, the 35th U.S. president, (Scott 9N214).

When the United States issues stamps to honor its presidents, those stamps generally fall into one of three different categories.

Definitive stamps are the regular-issue stamps seen day after day in post offices across the United States. They remain on sale for long periods of time and are often reprinted when supplies run low.

At left in Figure 4 is just one example of a definitive stamp picturing a U.S. president. The 8¢ Dwight D. Eisenhower definitive was issued in May 1971 and saw regular use for about three years.

Some definitive stamps remain on sale for much longer periods. The purple 3¢ Thomas Jefferson stamp of 1938 was one stamp that seemed like it would remain in use forever.

That stamp was part of a large, long-running definitive series known as the Presidentials, nicknamed the Prexies. Thirty-two different designs featured portraits of 29 different presidents, plus a ½¢ stamp for Benjamin Franklin, a 1½¢ stamp for Martha Washington, and a 4½¢ stamp picturing the White House.

Other definitive series have included their share of presidents, including the 1954 Liberty series with seven, and the 1965 Prominent Americans series with six presidents.

Roosevelt is remembered by many people for many reasons, but stamp collectors always recall that the popular president was a proud stamp collector himself. He considered the time spent with his collection to be the best way to relax from the rigors of the presidency, and he assembled a remarkable collection of interesting stamps and covers from all over the world.

He was also very involved in the development of U.S. postage stamps, much more so than any other president before him or since.

Additional information about both books can be found in the Linn's Library.

Commemoratives such as the 20¢ Roosevelt stamp are issued in smaller quantities than definitive stamps, and they usually remain on sale for a shorter time, generally between one and two years.

The third stamp shown in Figure 4 is also a commemorative stamp, but it has a special designation as a memorial issue. The 32¢ Richard Nixon stamp was issued April 26, 1995, barely a year after the 37th president died April 22, 1994.

Postal Service regulations state that no individual should be honored on a postage stamp until 10 years have passed since his death. The exception to this rule is U.S. presidents. Generally, when a president dies, the Postal Service creates a stamp known as the memorial issue and releases it within one year of the president's passing, often on the anniversary of the fallen leader's birth.

The Postal Service has been less appreciative of the many men who have served as vice presidents of the United States. While 13 former vice presidents have appeared on U.S. stamps, 12 had also achieved the position of president during their lifetimes.

That leaves just one man who was specifically recognized for his contributions as vice president of the United States (as well as for his years of service in the United States Senate). The 52¢ Hubert H. Humphrey stamp shown in Figure 5 was issued in 1991, more than 13 years after Humphrey died in 1978.