Take another, closer look at these stamps 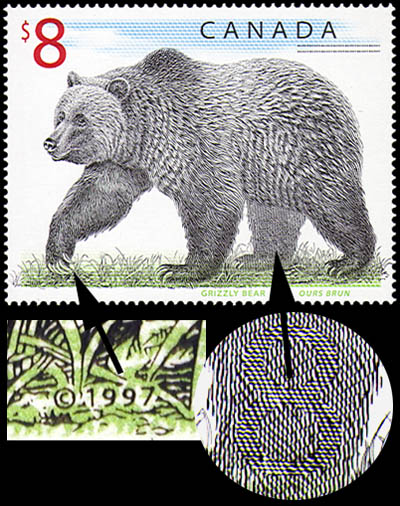 Study this Canadian stamp to find a year date and an "8." The design also includes rows of tiny bears.

Strong magnification reveals that Padre Felix Varela's portrait on this stamp consists of the repeated letters "USPS." The close-up pictures his left eye. 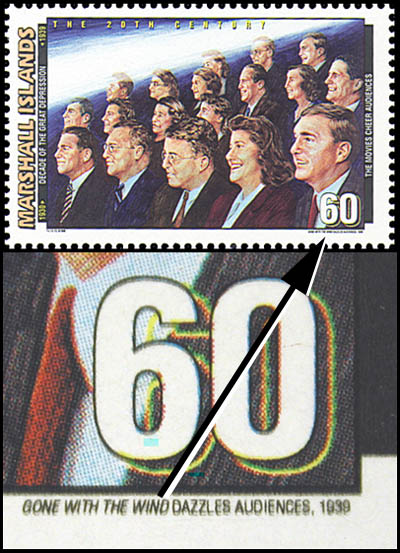 Read the tiny inscription to find out more information about this stamp from the Marshall Islands. 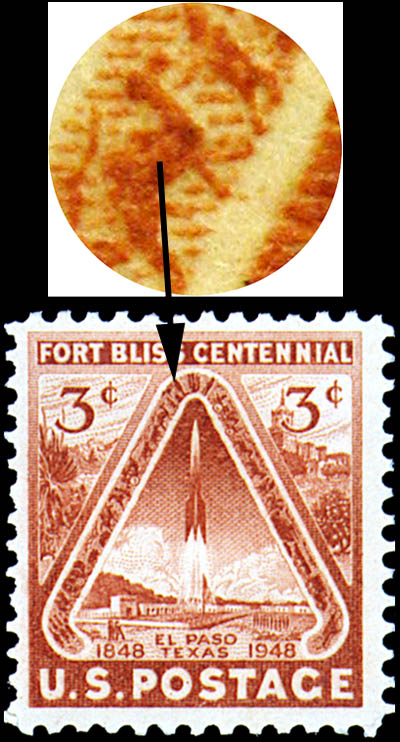 A camel is among the many images you can discover on this 1948 United States Fort Bliss stamp. 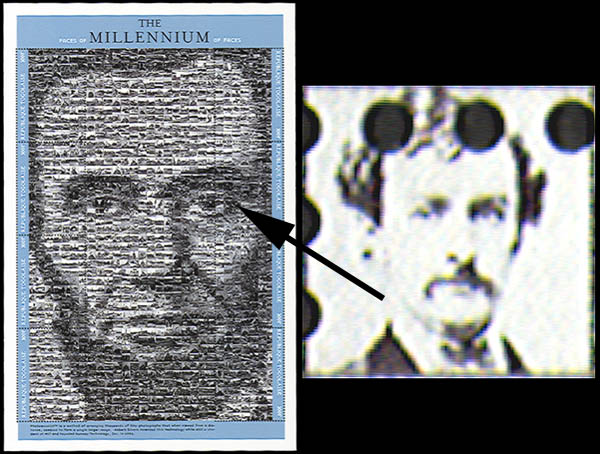 Carefully examine the thousands of Civil War photographs shown on this Abraham Lincoln mosaic pane from Togo to locate the one picturing John Wilkes Booth. 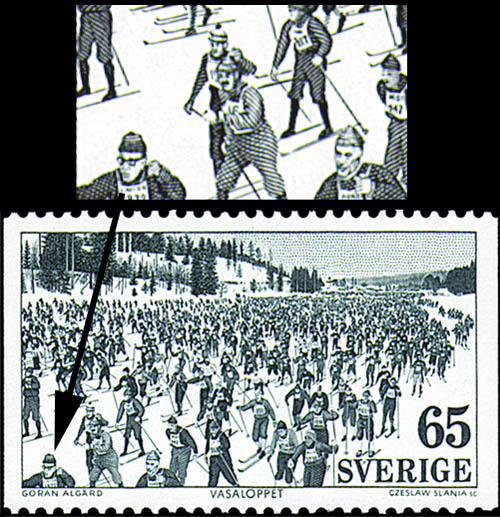 Czeslaw Slania engraved this 1973 Swedish stamp that shows the Vassa Ski Race. By using a magnifying glass, you can find where the famous stamp engraver placed an image of himself among the skiers. 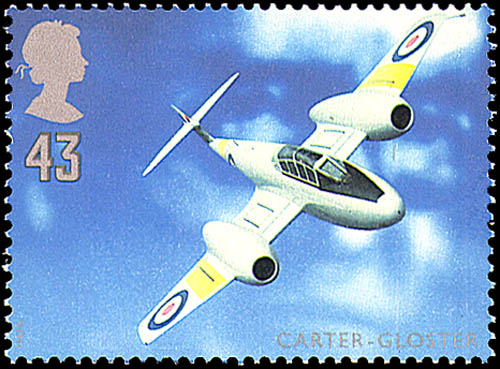 Glance at the clouds on this British stamp, to spot the plane's designer.

Turn this 1904 stamp from Serbia upside down to see the face of King Alexander, murdered the previous year. 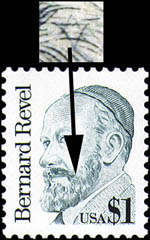 Locating the Star of David on the $1 Bernard Revel Great Americans definitive can be a challenge.

Look closely at this 1947 airmail stamp from Monaco to find an extra finger on President Roosevelt's left hand.
Previous
Next

Sometimes looking at a stamp closely can reveal more of the design than is readily apparent.

You also can discover errors in stamp design. Stamp designers, like everyone else, make mistakes from time to time.You can find things you didn't expect to see, hidden designs or something that helps you learn more about the stamp.

A magnifier isn't always needed to find the extra dimension in a stamp design. Tradition says that a hidden image of Serbia's King Alexander is revealed when you turn the stamp shown in Figure 2 upside down.

This 50-para stamp was issued by Serbia in 1904 to mark the 100th anniversary of the Karageorgevich dynasty and the coronation of King Peter (83). Four other stamps (79-82) have the same design of the new king and his ancestor, Karageorge.

By turning any one of these stamps upside down and concentrating on the dark nostril spots, you can make out the face of Alexander, who was beaten and murdered in 1903.

In an article in the March 15, 1993, Linn's, J.R. Brunskill wrote: "Looking at the upside-down portraits, King Alexander's eyes are formed by the nostrils of the two profiles. The mustaches of the two men form his eyebrows. The eye and eyebrow of the inside Karageorge profile are the dead King Alexander's nose and mouth."

Herb Marx mentioned several stamps that are worth taking a second look at during a slide presentation he gave on holograms and philately at the American Topical Association's Topical Stamp Show held June 22-24 in Mesa, Ariz. Marx's presentation inspired this column.

In addition to holograms, he showed slides of stamp designs that feature various optical illusions, such as the British stamp pictured in Figure 3.

Look closely at the clouds and you will find the face of aircraft designer George Carter.

Great Britain issued this 43-penny stamp (1761) June 10, 1997, in a set of five commemorating British aircraft and their designers.

All of the stamps have a similar design, with the aircraft in the foreground and the facial features of the man who designed the plane forming the clouds in the background.

Czeslaw Slania, the world's most prolific and best-known stamp engraver and Sweden's royal court engraver, is known to play jokes by hiding items in stamp designs. He engraved images of himself and a few of his friends on the Swedish stamp pictured in Figure 4.

Slania is the cross-country skier wearing the glasses in the extreme lower-left corner of the design.

At first glance, the 1999 stamp issue from Togo (1890) shown in Figure 5 appears to reproduce a photograph of Abraham Lincoln.

Actually, thousands of Civil War photographs were combined to make this illustration. If you take an extremely close look, you can even find a photograph of Lincoln's assassin, John Wilkes Booth.

The Booth photo is located in the top-left corner of the third stamp in the left-hand column of the pane.

The pane includes eight 300-franc stamps in two vertical columns with a large label in between the two columns of stamps.

The Togo issue is one of several that reproduce artwork known by the trademark Photomosaic. Robert Silvers developed the technique for Photomosaics, and he is credited with designing the stamps that reproduce this artwork.

The photos for Togo's Abraham Lincoln Photomosaic pane came from the Library of Congress' National Digital Archive. In addition to people and places, the photos show horses, cannons, ships, a bicycle, flags and an umbrella.

If you collect by topic or theme, you may want to take a closer look at this and other Photomosaic stamps to see what you can find for your collection.

The United States 3¢ Fort Bliss Centennial commemorative of 1948 (976) also is a treasure trove for topical collectors.

A quick glance at the stamp reveals some of the images: a rocket, the fort, a Spanish mission and desert flora.

A detailed examination is needed, though, to uncover the many items pictured in the triangular border surrounding the central part of the design. As can be see in the enlarged circle shown near the stamp in Figure 6, a camel is depicted on the left part of the triangle near the top.

Other tiny images on this stamp illustrate different modes of transportation, including on foot, on horseback, by Conestoga wagon, by stagecoach, by car and by plane. Military vehicles also are shown.

The Marshall Islands took a look back at the 20th century, decade by decade, on a series of stamps released from 1997 through 2000.

To get the full impact of this 150-stamp series, get out a magnifying glass to read the tiny text, or microprinting, in the lower-right corner below the denomination on each design.

Figure 7 depicts one of the stamps from the pane of 15 highlighting the years 1930-39, the years of the Great Depression. This 60¢ stamp (657o) shows a movie audience and is inscribed "The Movies Cheer Audiences" up the right side.

The very small inscription below the "60" gives more information about the design. It says, "Gone With the Wind Dazzles Audiences. 1939."

While the Marshall Islands used microprinting to provide more information about the subjects honored on its 20th-Century series stamps, microprinting more often serves as a security device. In other words, this minuscule printing is supposed to make it more difficult for someone to counterfeit a stamp.

The portrait of Varela on the stamp consists entirely of the microprinted letters "USPS" repeated throughout the design.

Figure 8 depicts the stamp and a close-up of the microprinting that forms Varela's left eye and eyebrow.

Canada has placed tiny year dates in its stamp designs since before World War II. However, its 1997 $8 Grizzly Bear stamp (Scott 1700), shown in Figure 9, also features microprinting and other items hidden in the design to help thwart counterfeiters.

For example, the figure "8" is hidden in the right, hind leg of the grizzly bear. In addition, what appears to be sky is really rows of tiny, blue bears, and rows of green bears are pictured in the grass.

Take a really close look at your stamps to discover even more hidden designs.