The United States issued its first self-adhesive stamp in 1974. The adhesive proved to be unstable over time, and severe discoloration of the stamps resulted. 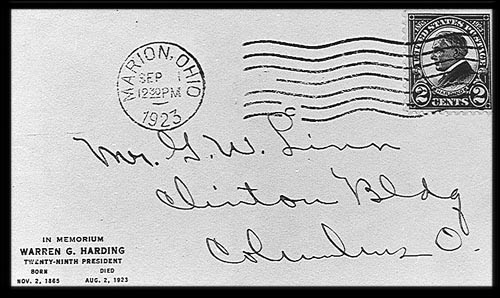 The first cacheted first-day cover is credited to George Linn, who applied a simple five-line inscription to mourning covers used with the 2¢ Harding Memorial stamp. 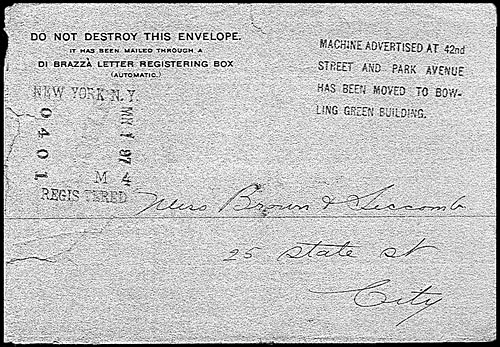 In 1869, the United States issued its first pictorial stamps. The 3¢ Locomotive is shown here.

Shown here are the first two postage stamps issued by the United States. The 5¢ Benjamin Franklin, left, and the 10¢ George Washington were issued July 1, 1847.
Previous
Next

A little history lesson can be useful in any area of stamp collecting, so here we will take a look at the basics: a brief history of the United States postal system and postage stamp production.Some casual collectors, however, simply might see postal history as too daunting, or they might just have no idea where to begin.

The first official implementation of a real postal system in the North American colonies was in 1639, when Richard Fairbanks became an early mail forwarder (a postmaster of sorts) of the Massachusetts Bay Colony. His tavern became a repository for overseas mail.

Most colonists relied on friends, merchants and American Indians to transport letters between the colonies.

As the colonies sought independence, the Continental Congress in 1775 named Benjamin Franklin the first postmaster general of what was to become the United States.

New York was the seat of government and headquarters for this infant national postal system until 1790 followed by Philadelphia from 1970 to 1800 when it moved to Washington, D.C.

Franklin established a postal system that evolved into what is the United States Postal Service today.

By the time the first postmaster general was appointed as a member of the Cabinet under the Constitution of the United States in 1829, there were 75 post offices and about 2,000 miles of post roads in operation.

In 1831, trains began to carry mail for short distances. By 1836, the Post Office Department granted its first mail contract to the railroads, and two years later, railroads were designated an official postal route.

Adhesive postage stamps were introduced in Great Britain in 1840.

The United States issued the first of its own adhesive postage stamps July 1, 1847. These first two stamps are illustrated in Figure 1.

The 5¢ Benjamin Franklin stamp paid the ½-ounce rate for a letter traveling less than 300 miles. The 10¢ George Washington carried a ½-ounce letter more than 300 miles.

In 1853, stamped envelopes made their U.S. debut. The 3¢ red George Washington envelopes paid the ½-ounce letter rate for up to 3,000 miles. The rate for distances of more than 3,000 miles was paid by the 6¢ envelopes. The distance differential for domestic postage was eliminated July 1, 1863.

Prepayment of postage was required beginning in 1855. Until then, postage could be paid by the addressee when the mail was delivered.

The legendary pony express, running through parts of various states or territories (Missouri, Kansas, Nebraska, Colorado, Wyoming, Utah, Nevada and California), began in April 1860 as a private enterprise and operated that way through June 1861. From July 1, 1861, it operated under contract as a mail route until Oct. 24, 1861, when the transcontinental telegraph line was completed.

In 1869, the country issued its first postage stamps picturing something other than a dead person. These Pictorials, as they are called, show a post horse and rider, a locomotive, a shield and eagle, and a ship, the Adriatic. The 3¢ Locomotive stamp is shown in Figure 2.

In 1873, the USPOD issued its first penny postal cards.

Special delivery service was born in 1885.

Commemorative stamps were issued for the first time in the United States in 1893. The Columbian Exposition issue depicts scenes from Columbus' voyage to America. The 4¢ Columbian is illustrated in Figure 3.

At the same time appeared the first machine cancellation to use a promotional slogan instead of canceling bars. The cancellation promoted the Columbian Exposition in Chicago.

Rural free delivery service began in 1896. Prior to this time, people living in the country had to pick up their mail at the post office in town. The RFD system was made permanent in 1902.

The use of private postcards was authorized in 1898.

The transport of mail by airplane was first sanctioned in 1911, for a route between Garden City and Mineola, N.Y.

On May 13, 1918, the first regular-issue airmail stamps went on sale for the first U.S. airmail flights, to begin two days later. The flight route linked Washington, D.C., and New York City via Philadelphia.

The rate was 24¢ an ounce, including special delivery to the addressee. The stamp, picturing a Curtiss Jenny biplane, is shown in Figure 5.

In 1923, the first cacheted (decorated) first-day cover, shown in Figure 6, was created by George Linn. It was for the 2¢ Harding Memorial stamp. The black-bordered mourning envelopes bore a simple five-line remembrance.

Highway post offices were established in 1941. They were discontinued in 1974.

On July 1, 1963, the ZIP code system was born. The Zone Improvement Plan code was a five-digit number. The first number designates state or area; the next two numbers designate the area within that state or area; and the last two digits indicate the receiving post office. The ZIP+4 code was introduced in 1983.

The first U.S. se-tenant stamps (different designs in the same sheet) were the Christmas stamps of 1964. The four different stamps pictured holly, mistletoe, poinsettia and a sprig of conifer.

Massive reorganization of a hopelessly outdated and overworked postal system in 1970 led to the transformation of the USPOD into the United States Postal Service.

The USPS, which officially began operations July 1, 1971, is a self-supporting corporation owned wholly by the federal government.

In 1974, the first U.S. self-adhesive stamp was issued, the 10¢ Dove Weathervane, shown in Figure 7. The adhesive proved to be unstable over time in storage, resulting in severe discoloration of the stamp. Eventually the problems were resolved, however, and full-scale production of self-adhesives began in 1992.

A discounted rate for presorted first-class mail was established in 1976. The next year, the separate rate for domestic airmail service was eliminated.

Express Mail next-day service officially began in 1977, and a stamp was issued in 1983, shown in Figure 8, for prepayment of 2-pound packages. The service had been in an experimental stage since 1970.

On July 29, 1998, the United States issued its first semipostal stamp. The Breast Cancer Research stamp sold for 40¢, 32¢ for first-class postage with the 8¢ surcharge going to breast cancer research (later 33¢+7¢, then 34¢+6¢, when postage rates changed).

Editor's Note: This column does not take into account revenue stamps or local or provisional issues, only those issued for use anywhere in the United States.