Use hinges or mounts to suit your needs 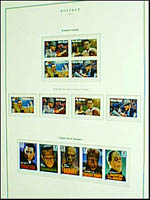 Self-mounting album pages, also called hingeless by some makers, do just what they say. No additional hinges or mounts are necessary to add a stamp to the page.

A correctly sized mount holds the stamp snugly without cramping and with the stamp framed equally on all sides. 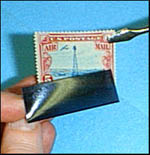 This Beacon airmail stamp is being inserted into the bottom half of a split-back mount. The top flap of the mount is held out of the way to allow insertion.

A hinge or a mount will affix a stamp to a page, but with different results in appearance and in protection.

A hinge should be placed at top center on the stamp, below the perforations to avoid damaging them. 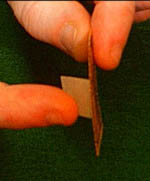 Using a moistened fingertip to wet a hinge controls the amount of moisture better than licking does.

Hinges are older than mounts, but each is useful in its own way for attaching stamps to album pages.
Previous
Next

Stamp collecting is an unusual hobby in many ways. Perhaps what is most unusual is how collectors keep mint stamps in order — the way that seems most obvious is also the absolute worst way. Stamp albums are made of paper, and mint stamps have gum, so the logical thing to do would be to lick the stamps and stick them on the page. For self-adhesive stamps, there would be no licking.

These collectors made small paper hinges for stamps. They may have taken their example from the art world, where hinges made of various materials were used to stabilize paper artwork during the framing process.Stuck-down stamps are seen in some old collections, where collectors simply did what seemed to make sense. They stuck the mint stamps down with their own gum and stuck the used ones down with paste or glue. Other collectors looked for another way to mount their stamps. They may have wanted a less damaging mounting method. They may also have wanted to be able to remove stamps from their albums for sale or trade, or to replace them with nicer examples.

Stamp mounts came into their own in the 1940s. They were small pockets that could be affixed to an album page to hold the stamp without attaching anything to its back. Figure 1 pictures a packet of hinges and a few loose black-background mounts. The choice of hinges or mounts is yours.

Early homemade hinges can be surprising. Some were made of much heavier and stiffer paper than the stamps, as if the hinges were supporting great weight under difficult conditions. Attached with thick mucilage, these amateur products are often impossible to remove safely from the stamps.

When commercially produced stamp hinges became available, some of them suffered from overkill. They were wider and longer than necessary, made of very heavy glassine (a semi-transparent, water and grease resistant glazed paper) and had thick gum. Over time, commercial hinges improved, becoming smaller and lighter with a light layer of gum.

Hinge manufacturing was profitable when the hobby was growing. Demand was high and collectors wanted a choice of brands.

Peelability was and is the most desirable quality in hinges. Peelable hinges can easily be removed from mint stamps without damaging the paper of the stamp, although the gum is permanently disturbed. A hinge that does not peel easily can pull gum as well as paper from a stamp.

Thins are even more likely to occur when a hinge that won't peel is removed from a used stamp, since the gum on a mint stamp provides some protection to the stamp paper.

As collecting of mint stamps became more popular and mounts became more common, the manufacture of hinges became less profitable. Hinge manufacturing is a complicated process, especially for an item selling for less than a tenth of a cent apiece. In the 1980s and 1990s, collectors using hinges found fewer choices and poorer quality, especially in the critical area of peelability.

The comparatively few brands of hinges available today are generally useable, but many do not peel well. When using a new batch of hinges, always experiment first on common or damaged stamps to see how well they work.

Whatever the brand of hinges, a collector has some control over how well they work. The most important factors are the amount of moisture on the hinge and the placement of the hinge on the back of the stamp.

Too much moisture can remove the gum on the hinge so that it will not stick properly to the stamp or the album page. Worse yet, an overly moist hinge may stick too firmly or spread excess moisture onto the gum of a mint stamp. A hinge that was too wet when applied may not peel off easily later.

Most collectors lick a hinge directly. This seems reasonable except that it's difficult to control the amount of moisture involved. A better method is to hold the hinge either with tongs or your fingers, lick the tip of your index finger, and then touch your finger to the short folded end of the hinge.

Figure 2 shows the finger method being used to apply moisture to the long end of a hinge. The short end of the hinge is the part that goes on the stamp. It goes on the center of the top of the stamp, slightly below the top edge. Do this for a perforated stamp, a die-cut one or a mint self-stick still on its backing paper.

Put the hinge below the perforations, not on them and not too close. A hinge on the perforations surely will damage them when it is removed. Putting the hinge too far down on the stamp will make it difficult to remove from the page. The stamp also could be creased in pulling it up and off the album page. Figure 3 illustrates a correctly placed hinge on a United States stamp.

Next, hold the stamp carefully and lift the free end of the hinge away from the stamp. Lick your fingertip again, and touch it to the gummed surface of the free end. Be careful not to wet the stamp. Just rub your moistened fingertip quickly and evenly over the hinge gum. Then gently press the stamp into place on the page.

Pressing a mint stamp with a hinge that is too wet will spread the excess moisture from under the hinge onto the stamp and will glue it to the page. If you made a mistake in placing a stamp, let the hinge dry thoroughly before trying to lift it from the page. Be patient. Even the best hinges are peelable only when the gum is completely dry.

Packages of 1,000 stamp hinges usually sell for about $2. The low price is why hinges remain popular, especially for mounting used stamps of nominal value.

For mint or high-value used stamps, many collectors prefer to use mounts. They are more expensive, but they provide greater protection for stamps. Mounts also may work better for mint self-stick stamps with backing paper. These issues tend to be too heavy for a hinge.

Many collectors also simply like the way a mount showcases a stamp. Figure 4 shows the same stamp mounted, left, and hinged, right. The word "mount" originally referred to a generic term that included a variety of styles. Some were small pockets made of transparent material with an adhesive strip. Others were clear strips with flaps that the user folded to size around the stamp. Moisture could gather in some of these mounts and ruin the stamps.

Today's mounts are more standardized so that the word generally refers to two basic types. One is a small plastic holder closed on three sides with a self-adhesive strip to attach it to the page. The other has a transparent front and an adhesive back, clear or black, that is either slit horizontally or open at the top. The stamp is simply inserted in the type that is open at the top.

For the slit-back style, the stamp is inserted in the bottom of the mount, as shown in Figure 5. The top half of the backing flips down to enclose the stamp, and the top flap is lightly moistened along the top edge and affixed to the page. Only moisten the top flap on the slit-back style mount. Do not stick both top and bottom. This way the unattached bottom half of the mount can be lifted to slip the stamp out with tongs without having to remove the mount from the page.

Mounts are sized by both height and width. They come two ways: in strips that you cut to the width you need or precut in various sizes. A stamp in a correct mount fits snugly without bending its perforations and with approximate equal borders on all four sides, framing the stamp as shown in Figure 6.

Hinges and mounts may be bought from dealers listed under the headings of accessories or supplies in listings of stamp hobby dealers. Many album makers sell hinges. They also may sell hingeless or self-mounting album pages. These pages have the proper-size mounts already affixed to the pages.

Mounting a stamp in a hingeless album is a simple matter of pulling the strip gently away from the page and slipping the stamp in place. A Scott self-mounting album page of modern U.S. stamps is shown in Figure 7.