Self-adhesives belong in your mint collection

Panes with margin paper all around will yield single stamps still affixed to liner (left). The single stamp can be saved in a stamp mount (right) and placed on an album page. 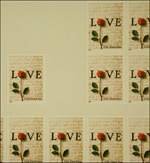 The single Love stamp has been isolated by removing the surrounding stamps and the peel-off strip. The collector can then cut the single stamp from the pane, leaving a margin of liner on all four sides.

Additional self-adhesive formats include folded booklets (left), panes with selvage around the outer edges (center), and flat panes with no outer selvage (right). 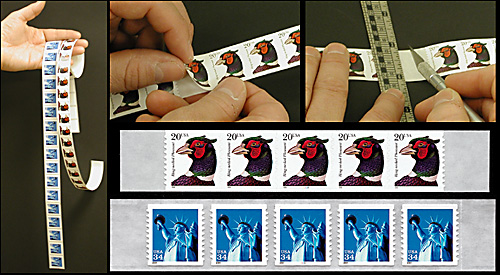 Long strips of coil stamps (left) can be trimmed to shorter lengths by removing single stamps from either side of the desired strip (top left) and trimming the strip carefully (top right). The plate numbers on these coil strips are located in the bottom margin of the center stamps on each of the two illustrated strips of five (bottom).
Previous
Next

In recent years the use of self-adhesive postage stamps has increased significantly. But while mailers find self-adhesive stamps convenient, some collectors have wondered how to fit them into their collections of mint stamps.

To be preserved in mint condition, the self-adhesive stamp cannot be removed from the liner.Self-adhesive stamps, also known as peel-and-stick, self-stick or pressure-sensitive adhesives, are almost all issued on paper backing called liner. The stamps have adhesive on the back. When peeled free of the liner, the adhesive is exposed and the stamp can be affixed directly to mail.

Self-adhesive stamps are issued in most of the familiar formats that have been used in the past for stamps with lick-and-stick style adhesive: that is, as coils, booklets and panes.

While the early self-adhesive stamps issued by the United States and a few other countries had straight edges all around, today's self-adhesives have die cuts that simulate the jagged outer edges of perforated stamps.

The U.S. Postal Service has even gone as far as mimicking the common characteristics of perforated stamps when creating self-adhesives: coil stamps have straight edges at top and bottom, and booklet stamps often have straight edges on one side or two adjoining sides.

U.S. self-adhesive coil stamps are issued using two basic formats. Some rolls have stamps side-by-side, separated only by die cuts, with no space between the stamps and no excess liner showing above or below. For an example see the strip of five 20¢ Pheasant coils shown at the bottom of Figure 1.

The other format has each stamp in the roll separated by a little bit of space. Liner paper is visible between each stamp, and liner paper also extends slightly above and below the stamp. The strip of five 34¢ Statue of Liberty coils shown at the bottom of Figure 1 illustrates this second format.

Coils are sold in roll sizes ranging from 100 stamps to 10,000 stamps, but collectors often buy strips of 25 from the Postal Service to obtain an example of a stamp bearing a plate number, which is printed near the bottom of one stamp at regular intervals in the coil.

For coil stamps with more than one design, such as the 34¢ Four Flowers self-adhesive coils issued Feb. 7, plate number strips as long as nine stamps are recommended, again with the plate number single as the center stamp.

Creating these strips is as easy as removing the two stamps on either side of the strip to be saved and cutting through the exposed liner. The pictures in the center of Figure 1 show this technique. Either a razor knife or scissors may be used to make the cuts. Children using these tools need adult supervision.

The cuts should not be made too close to the stamps on either end of the strip, and they should be straight and even. The removed stamps can be placed on mail or saved on discarded liner for later use. Similar methods can be used to save single coil stamps, pairs, or strips of any size.

Collector preferences also vary when it comes to saving self-adhesive stamps from booklets or panes. Figure 2 shows an opened-out folded booklet of 15 33¢ Fruit Berries stamps, a pane of 20 55¢ Billy Mitchell stamps, and a pane of 20 nondenominated (34¢) Rose and Love Letter stamps. The Love stamps are in the format described as a convertible booklet by the U.S. Postal Service.

Notice that the Love stamps pane has no selvage (outer margin paper) around the outer edges, while the Mitchell pane has selvage all around. With either of these two pane formats, some collectors choose to save the full pane of 20 stamps, while others only save individual stamps.

To save single stamps from panes with no selvage around the outer edge (such as the illustrated Love issue), collectors can use a technique similar to that previously described for coil stamps. By removing the peel-off strip and surrounding stamps, as shown in Figure 3, the collector has isolated a single stamp, which can be cut from the pane with a margin of liner on all four sides.

Stamps from panes with margin paper all around (such as the Mitchell issue) can be individually removed with the liner paper still affixed to the back, because the liner has die cuts that make it easy to tear apart. A row of stamps can be separated from the pane by creasing between the row, folding backward (not forward) a few times and then tearing between the stamps.

As with lick-and-stick stamps, mint self-adhesives on liner can be saved and displayed using stamp mounts, which are available from most stamp dealers. The mounted stamp can then be affixed to a stamp album page.

Stamp hinges, which are gummed bits of glassine paper, may hold mint self-adhesive stamps to album pages, but this choice is not recommended. The hinges may not adhere well to the liner, and stamps can fall off the page and be lost or damaged.

The Scott catalog describes plate block formats for self-adhesive stamps from panes with selvage around the outer edges, such as the Mitchell stamp. These are saved on liner with selvage attached, in the same way that perforated plate blocks are saved.

Scott does not list plate block configurations for stamps from panes without outer selvage. In such cases, the collector is encouraged to save the entire pane if he wants to keep the plate number, which is usually printed on the peel-off strip through the center of the pane.

Booklet stamps also may be collected as individual single stamps or as intact complete booklets. Some self-adhesive booklets have plate numbers printed in the lower margin of one stamp, usually positioned in the bottom row of stamps.

The stamps in the Fruit Berries booklet shown in Figure 2 are all on a single liner that makes up the outer cover of the booklet when it is folded.

The Scott U.S. specialized catalog suggests that such a booklet can be divided into three panes that separate where the booklet folds. Because the issue has four different designs, the catalog also suggests the option of saving a simple block of four from the booklet.

As you plan your own collection of mint U.S. stamps including self-adhesives, think about maintaining uniformity in the way you collect. If you choose to save a full pane of the Love stamps, for example, your collection will probably seem more cohesive if you save other flat pane issues intact as well.

Several factors, including cost, may influence what you decide to collect, but if your interest is in new issues, it is easy to invite self-adhesive stamps into your collection.