Ads on postal items appear in many forms 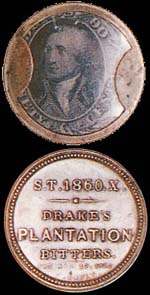 The front and back of Civil War-era encased postage. These items were used as coins, not stamps.

This 1993 British postmark could be taken to the McDonald's in Stafford to get two Big Macs for only £2. 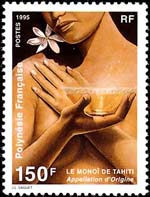 A woman applies Monoi lotion on this stamp issued by French Polynesia. 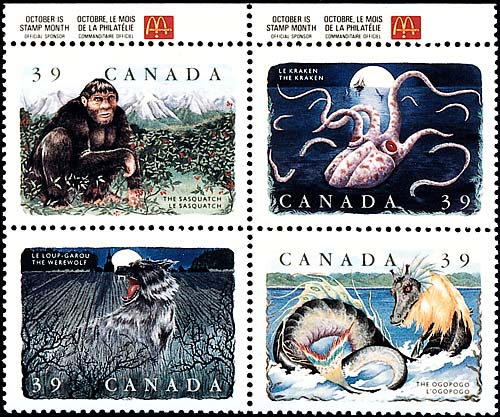 A label advertising Oldsmobile is se-tenant with two Danish booklet stamps. Denmark issued several booklets with such advertising labels from 1927 through 1934. 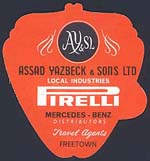 This peelable label from the back of a Sierra Leone free-form self-adhesive features an ad for a company.

Several commercial products, including the movie Titanic and the Barbie doll, are pictured on stamps in the United States Celebrate the Century series of 1998-2000.
Previous
Next

The United States Postal Service recently revised the Citizens' Stamp Advisory Committee guidelines regarding the use of advertising on stamps (Linn's, April 9, page 1). The CSAC reviews the more than 50,000 stamp subject proposals received annually by the Postal Service, and it makes subject and design recommendations to the postmaster general.

Such use of commercial products in stamp designs is apparent in the Celebrate the Century series of 1998-2000. Figure 1 depicts two of the products displayed on stamps in this series: the 1997 film Titanic and the Barbie doll, introduced by Mattel in 1959. Both of those stamps have back-printing that provides more information about the product pictured on the front.Outright advertising on U.S. stamps still isn't permitted, but the new guidelines state the new liberal approach and catch up with the reality of recent stamps: "Commercial products or enterprises might be used to illustrate more general concepts related to American culture."

One of the earliest forms of advertising on stamps also appeared on the backs of stamps. In 1893, the New Zealand government awarded a contract to the advertising firm of Truebridge, Miller and Reich to use the space on the backs of stamps for ads. Ads for such products as Beecham's Pills, Flag Brand Pickles and Sunlight Soap were printed on the back of New Zealand's 1882 Queen Victoria issue. This advertising venture was not successful. For one thing, once a stamp was affixed to an envelope, nobody could see the ad.

Other countries also have attempted advertising on the back of stamps. Figure 2 shows an example from Sierra Leone. In the 1960s and early 1970s, Sierra Leone issued self-adhesive stamps in various shapes. Some of these self-stick stamps included advertising on a label that was peeled off the back to use the stamp.

The peelable label shown in Figure 2 promotes the firm of Assad Yazbeck and Sons of Freetown. According to the label, the firm sold Pirelli tires, was a distributor for Mercedes-Benz and served as a travel agency. This label is attached to the back of a 1965 50¢ stamp showing Sierra Leone's coat of arms and inscribed "Land of Iron & Diamonds."

Advertisements also can be found on labels that are se-tenant, or side by side, with a stamp. In many cases, these stamps are in booklets. Figure 3 shows two Danish booklet stamps with an attached label advertising Oldsmobile. This booklet was issued in July 1928. Among the other cars promoted on labels se-tenant with Danish booklet stamps of the late 1920s and early 1930s are Chevrolet, Pontiac, Buick, La Salle and Cadillac.

During approximately the same era, Great Britain and Belgium issued stamp booklets that included advertising labels. Also, around 1911, booklets from Germany, German South-West Africa and Bavaria carried advertisements on se-tenant labels. Some stamp firms took advantage of this type of advertising, with ads from Yvert et Tellier on Belgian labels, from the Michel catalog on Bavarian labels and from Harmer, Rooke & Co. on British labels.

In addition, booklet covers sometimes carry advertisements for products. In 1924-25, Italy issued 19 stamps with attached advertising labels. However, the labels were not separated by perforations. Roy A. Dehn wrote in his handbook Italian Stamps: "It was the original intention that the labels should be separated from the stamp by perforation; but this intention was ignored. As a result, since international regulations forbade the use of advertising labels on stamps, stamps used for external (foreign) mail had, according to the rule, to be cut away from the label."

It apparently was up to the user to decide whether to leave the label on or cut it off when using the stamp on mail sent within Italy. Columbia record players and Singer sewing machines were among the products advertised on the Italian labels.

A more recent example of advertising attached to a stamp is illustrated in Figure 4. Shown is Canada's 1990 Legendary Creatures block of four with McDonald's golden arches pictured on the selvage above the top two stamps. This block of four 39¢ stamps showing a sasquatch, a kraken, a werewolf and the Ogopogo was released Oct. 1, 1990, in conjunction with Canada's Stamp Collecting Month.

Some countries do not hide the ads on the backs of their stamps or on labels. Instead they proudly showcase their products and services as part of the stamp design. Figure 5 shows a 150-franc stamp from French Polynesia featuring Tahitian Monoi, a product that can be used as a suntanning lotion. The stamp shows a woman applying Monoi.

Postage meter stamps have long been used for advertising purposes. Doug Kelsey,Linn's Meter Stamps columnist, writes in the introduction to his book Pictorial Meter Stamps of the United States: "Postmark advertising is a very popular aspect of meter stamp collecting. Postmark advertisements are the small, posterlike ads that appear on envelopes alongside postage meter stamps. The ads promote commercial products and services, special events and purposes, and worthy public causes.

"Postage meter companies, seeing the potential that the upper-right-hand envelope corner offered, wasted no time in developing their brand of postal billboard. There are two types of postmark advertisements, slogan and pictorial."

Figure 6 shows a Nov. 20, 1942, meter stamp with a pictorial advertisement from American Tiger Brand wire rope. "Postmarks also have been used to advertise products. McDonald's golden arches can be seen once again in the 1993 British postmark pictured in Figure 7. The postmark reads "2 BIG MACS FOR ONLY £2 when you present this postmark only at McDonald's Stafford."

USPS regulations prohibit such blatant advertising of private products or services in special cancellations. However, the postmark seen on a great deal of mail around Christmas in 2000 promoted the movie Dr. Seuss' How The Grinch Stole Christmas.The postmark pictures the Grinch's hand holding an ornament. The text reads "Happy 'Who-Lidays' from the U.S. Postal Service!"

Advertisements also can be found elsewhere in the mail, including on postal stationery and on privately produced envelopes and postcards. The American Civil War gave rise to other forms of advertising related to the stamp hobby: private-die proprietary revenue stamps and encased postage stamps.

To raise money for the U.S. treasury, the Congress passed the Revenue Act of 1862, which called for revenue stamps to be affixed to boxes and books of matches, proprietary medicines, playing cards and other items. Companies were allowed to create their own revenue stamps for this purpose, and many took advantage of the advertising opportunity.

Companies also could advertise on the back of encased postage. These stamps inside brass frames with clear mica covers were not used for postage but rather served as coins. Encased postage was invented by J. Gault in response to the public's hoarding of coins during the Civil War. Figure 8 depicts the front and back of an encased postage stamp with an ad for Drake's Plantation Bitters.