Much information found in Scott catalogs 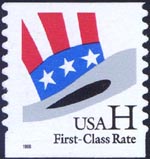 Scott lists seven different versions of the H-rate Hat stamp in its "Identifier of Definitive Issues" in the U.S. specialized catalog. 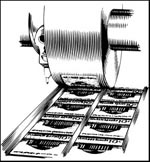 The Scott catalog shows how in the engraving process the design was transferred to the printing plate, a process no longer used.

The Scott catalog includes how-to information for collectors, such as showing how to use a perforation gauge. 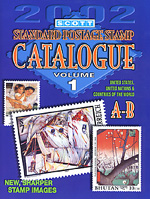 The cover of Vol. 1 of the 2002 Scott Standard Postage Stamp Catalogue. In addition to listings and valuations of stamps, the catalog has general hobby information.
Previous
Next

Scott Publishing Co. recently announced (Linn's, May 7, page 8) the new Vol. 1 of the 2002 Scott Standard Postage Stamp Catalog. It features new, improved images of actual stamps and has nearly 11,000 value changes from the previous Vol. 1. The cover of the new catalog is shown in Figure 1.

Scott catalog editor James Kloetzel said that one leading dealer recommends to his new customers that they read the introduction to the Scott specialized catalog, telling them that it will answer 90 percent of their questions.Generally, when collectors use the Scott catalog, they either look at the illustrations for help in identifying a stamp or refer to the valuations to find out what a particular stamp is worth. But the Scott catalogs offer a lot more. Each of the six volumes of theStandard Postage Stamp Catalog, plus the Specialized Catalogue of United States Stamps and Covers and the Classic Specialized Catalogue of Stamps and Covers 1840-1940, includes an introduction filled with valuable information for collectors.

Following a letter from Kloetzel and a page of acknowledgments, the introduction of the new Vol. 1 has a four-page list of addresses, telephone numbers, web sites and e-mail addresses of various stamp-hobby societies. Next comes a list of organizations that provide expertization services.

The meat of the introduction is a section called "Information on Catalogue Values, Grade and Condition." Here collectors can view stamps illustrating the different centering grades of fine-very fine, very fine to extremely fine and see diagrams for different gum categories, ranging from mint, never-hinged to no gum.

This section also provides explanations for various terms. For example, it is pointed out that "grade" addresses only the centering and (for used stamps) cancellation, while "condition" refers to factors other than grade that affect a stamp's desirability.

The next three sections, "Catalogue Listing Policy," "Understanding the Listings" and "Special Notices," provide information about items found in the catalog. These sections are required reading for collectors using the catalog for the first time.

The section "Basic Stamp Information" delivers what its title promises. Stamp paper, watermarks, methods of separation, printing processes, luminescence or tagging, gum, forgeries, counterfeits and fakes are all discussed. A short dictionary of stamp terms also is included. Figures 2, 3 and 4 reproduce illustrations from this section.

Figure 2 shows images representing six types of paper. Starting on the left in the top row, they are wove, laid, granite, quadrille, oblong quadrille and batonne. In addition to describing these and other types of paper used to print stamps, Scott also explains the process of making paper.

The subsection on printing processes begins with a detailed explanation of engraving, also known as intaglio, line-engraving and etching. Different stages in the process are illustrated as well. Figure 4 depicts the design being transferred to the plate with a transfer roll, a process used for the first U.S. stamps of 1847 and for many others through about the mid-1990s. In addition, the processes of typography, gravure and lithography are explained, and holograms, foil application and combination printings are discussed.

A page is devoted to currency conversion for 10 popularly collected countries and for those countries covered in Vol. 1. Of course, this information will be increasingly out of date as the year goes by.

A section on common design types lists and pictures stamps from multination, or omnibus series, including the Europa stamps of 1956 through 1973. Starting in 1974, countries followed a central Europa theme but created their own designs.

Various British Commonwealth omnibus series also are included. The last-mentioned series is the 1999 Queen Mother's Century celebrating the life of Great Britain's queen mother who turned 100 Aug. 4, 2000. In the Scott catalog, this series is represented by an illustration of the 15-penny stamp from Ascension Island, shown in Figure 5.

The listings of stamps and their values follows the introduction. Information of general interest also can be found among the listings. Each country starts with a guide to the pronunciation of its name, plus its location, government, area, population, a brief history and the currency or currencies it has used since issuing stamps.

After the stamp listings, Scott provides still more information for collectors. In the 2002 Vol. 1, dies and watermarks of British Colonial stamps are shown, British Commonwealth nations are listed, and an illustrated identifier is included for stamp designs without English words inscribed on them.

The introduction to the Scott U.S. specialized catalog presents information not found in Vols. 1-6 that list the stamps of the world. Much of this information in the Specialized pertains only to U.S. stamps and postal history.

For instance, the illustration shown in Figure 7 is from a section on postal markings. The markings shown were used on mail sent from New York City to foreign countries during 1871-77. About 200 different New York City foreign mail handstamp designs were used during that period.

As its name suggests, the "Identifier of Definitive Issues" offers help in identifying U.S. regular-issue stamps. The section starts with pictures and descriptions of the 1847 5¢ Benjamin Franklin and 10¢ George Washington stamps and ends with the more recent definitives, such as the H-rate Hat stamp shown in Figure 8. The identifier section in the U.S. specialized includes seven versions of this nondenominated stamp issued Nov. 9, 1998, for the new 33¢ rate introduced Jan. 10, 1999. The subject index makes it easier to search for a U.S. stamp by the subject it pictures or commemorates.