Corner of an 1893 stamped envelope of Nicaragua. At the right is the envelope's imprinted stamp, engraved in relief. The similar stamp imprint, left, was engraved in recess. Figure 7 pictures die proofs of each, both engraved.

Two of France's Marianne-design stamps, one printed by recess (left), the other by relief (right). Each stamp image began with a die engraved in soft steel. 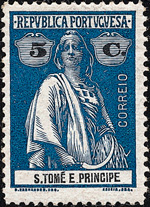 France typographed Senegal's 5-centime Gen. Louis Faidherbe stamp of 1906 in two colors. The overall design of the stamp is green, and the name "Senegal" is in red. The same design was used for other French colonial stamps. 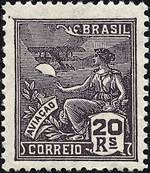 Brazil's 20-reis gray-violet Aviation Allegory stamp of 1929, one of many stamps Brazil issued after World War I that were printed from plates with the design in relief, called letterpress printing or typography.
Previous
Next

When it is used to describe a method of printing, the word "typography" is peculiar to stamp collecting. Printers call this printing method "letterpress," meaning printing from a base that uses a relief (raised) surface to carry the ink and apply it to the printing paper.

Typography, according to Scott, "provides for the parts of the design which are to show in color to be left at the original level of the plate . . ." These parts are said to be in relief, meaning they are higher than the part of the plate that does not print. This is the opposite of recess printing (also known as intaglio), which is called "engraved" in Scott catalog listings.This Refresher Course will use the word "typography," because that is the word found in English-language stamp catalogs. The Scott Standard Postage Stamp Catalogue first used the word in the 1894 edition, but the catalog editor did not explain the word until the 1896 edition in a section called "Hints for Collectors."

On the stamp shown in Figure 1, Brazil's 20-reis gray-violet Aviation Allegory stamp of 1929, all of the color on the paper was applied by the parts of the plate in relief. This includes the "20Rs" and the color surrounding the word "Brasil" but not the actual letters "Brasil," which are not inked.

Similarly, the word "Aviacao" is inked but "Correio" is not. The shapes for "Correio" and "Brasil" do not print because they are below the printing surface of the plate. Only the areas surrounding these letters are in relief and print. The Figure 1 stamp is one of many stamps that Brazil issued after World War I printed from plates with the design in relief.

It is important to understand that the words "typography" or "letterpress" refer to the printing method, not to the method used to create the initial stamp image used to make the printing plate. This initial image, called a master die, usually was engraved in soft steel — in relief for typography and in recess for intaglio.

Engraving the master die in relief means, for the Figure 2 Belgian stamps for example, cutting away the letters "Belgique-Belgie" so the areas around them remain high. This usually would be done so the design in the die reads backward, as a mirror image. From this master die, the printer would make the printing plate, using various steps to replicate the die and form the printing base.

The methods employed to do this varied greatly. They basically involved literally growing the metal plate in a copper solution (called electrotyping, similar to plating a kitchen faucet handle) or casting the metal plate out of a plaster or papier-mache mold (called stereotyping).

A lengthy, technical explanation of these processes appears in the 144-page Chapter 12, Relief Printing, in the book Fundamentals of Philately (published by the American Philatelic Society, Box 8000, State College, PA 16803, and still in print). This chapter is the longest one in the book.

The first national postage stamps to be typographed were the classic stamps of France, the Ceres and Napoleon designs. Nearly all of France's stamps issued from 1849 until about the 1930s were typographed.

To manufacture France's early stamps, it cost the French Mint about one-tenth of what it cost the firm Perkins, Bacon to create Great Britain's early recess-printed stamps. Because of such cost savings, it's no wonder that so many of the world's stamps were typographed. For its colonial stamps, France often used two-color typography, with a basic design in one color and the country name in another.

Figure 3 shows Senegal's 5-centime Gen. Louis Faidherbe two-color stamp of 1906. The overall design of the stamp is typographed in green, and the name "Senegal" is in red. Portugal, like France, shunned the expensive recess method. Most of Portugal's early stamps and those of its colonies were printed by typography. The Sao Tome and Principe 5-centavo blue Ceres stamp of 1914, shown in Figure 4, was printed by typography: blue for the basic design plus black for the colony name and denomination.

Does it matter that a collector can look at a stamp and be able to say that it is typographed? Yes, sometimes. It can matter, especially for a beginning collector, when the same design was printed two ways. Figure 5 shows two of France's Marianne-design stamps, one printed by recess (left), the other by relief (right). Each stamp image began with a die engraved in soft steel, but the stamps were printed by different processes.

The ink on the recess-printed stamp is slightly raised. The ink's bite can be felt with a fingertip, especially over the heavily inked areas. The ink on the relief-printed stamp feels smooth. The typographed stamp (the 6-franc value) shows the characteristic heavy lines that form the details, especially in the face. If the raised surfaces that printed these lines had not been thick, they could quickly have worn or broken off the plate. Delicate, thin engraved lines and shading are best left to recess printing.

These two Marianne stamps also can be told apart by their different-gauge side perforations, but it is still easy to understand how the two stamps might confuse a beginner. Two of Monaco's stamps picturing the Grimaldi family's coat of arms similarly could confuse a beginner, namely those in the 1923-33 series (typographed, relief) and those in the 1937-43 series (engraved, recess).

Figure 6 shows the stamp corner of an 1893 Volcanos stamped envelope of Nicaragua. At the right is the envelope's 5-centavo imprinted stamp, from a relief engraving and printed by either typography or stone lithography. The very similar perforated 5c stamp, left, began with a recess-engraved die and was printed in sheets by recess. Figure 7 pictures die proofs of each stamp, both from engravings.

The stamp proof shown on the left is from a die engraved in recess. It is printed on very thin paper, and its raised ink can be felt with a fingertip. Fine detailing appears in the slopes of the volcanos. The proof shown at the right, from a die engraved in relief, is printed on card and its ink feels smooth and flat. Heavy line work defines the sides of the volcanos.

The United States used typography only a few times for adhesive stamps: for the 1865 newspaper stamps and for various overprints and surcharges. Some early U.S. locals were typographed. By the second half of the 20th century, gravure (printing base of recessed cells) and offset (flat printing base) had replaced most typography.