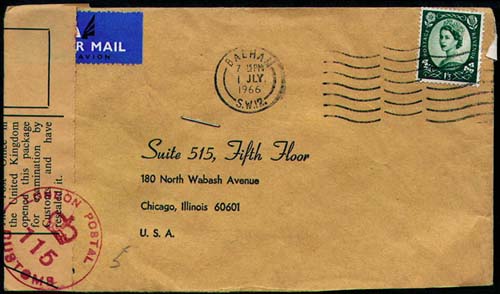 Figure 7. Customs inspectors in Great Britain opened this letter in 1966 during a period of IRA terrorist activity. Click on image to enlarge. 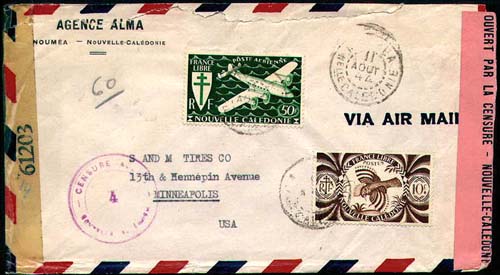 Figure 6. Cover censored in both New Caledonia and the United States during the waning days of World War II. Click on image to enlarge. 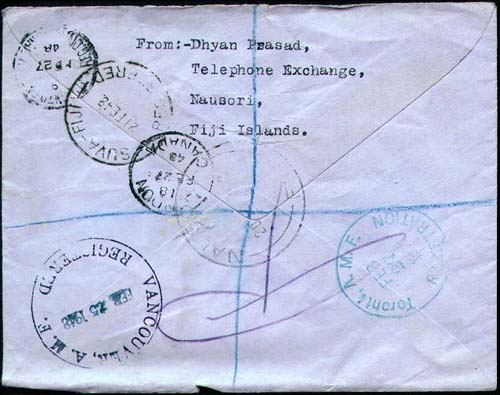 Figure 5. Transit markings on the reverse of the cover document the route the letter traveled from Fiji to Canada. Click on image to enlarge. 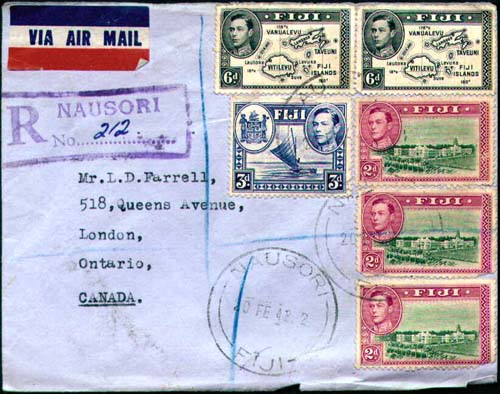 Figure 4. Cover sent in 1948 from Nausori, Fiji, to London, Ontario, Canada, by airmail. Figure 5 shows the back. Click on image to enlarge. 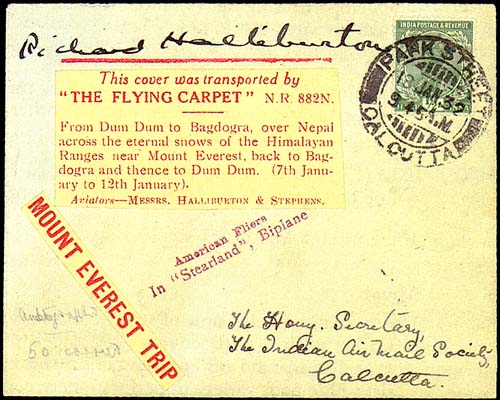 Figure 3. Cover carried by Halliburton and Stephens on their Mount Everest flight in the Flying Carpet. Click on image to enlarge. 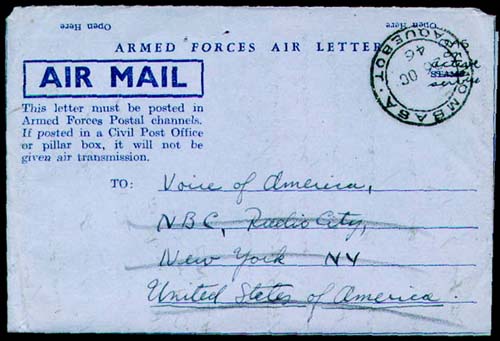 Figure 2. This air letter mailed from Mombasa to New York by a Canadian serviceman is a kind of stampless letter. Click on image to enlarge.

Figure 1. This letter mailed in New York in 1842 predates the use of postage stamps and yet contains enough information to determine both the route it took and the postal rate. Click on image to enlarge.
Previous
Next

Stamps were meant to be used to carry the mail. When a stamp is affixed to a piece of mail that gets into the mailstream, another sort of story begins. The clues to unraveling that story can be found in the postmarks and other markings that are applied en route.

A glance at the front and back of an envelope, called a cover by stamp collectors, gives a collector a lot of information very quickly.

The postmark provides the place, date and, often, the time the cover was mailed. A return address identifies the sender.

Note to whom and where the cover is addressed. A prominent recipient or an unusual destination can add both interest and value to an otherwise mundane cover.

Look carefully at the stamp or stamps. They should pay the correct rate for the destination at the time of mailing. Did the sender pay for extra services such as registration, insurance, or special delivery?

Check for backstamps. These postal markings, applied at the receiving office, are powerful evidence of how long the cover was in transit. Sometimes, especially if the letter was sent by registered mail or other special service, the cover will bear backstamps from offices through which it transited. These markings help track the route the cover took on its journey.

A cover can pick up all sorts of markings along the way. Here are specific examples of clues covers offer to help us unravel their stories.

Figure 1 shows an old stampless letter. There is no outer envelope. The letter sheet was folded to provide a place for the address, and sealed with sealing wax. The letter is addressed to Trumansburg, N.Y., and the red circular postmark indicates it was mailed Aug. 13 from Geneva, N.Y. The letter itself reveals more information. An oversize, double-paged legal document dated Aug. 10, 1842, it advises of a court judgment and the resulting legal fees.

This cover bears no stamps because the United States did not issue postage stamps to prepay postal fees until 1847. It does bear a handwritten notation "30" in the upper right corner that indicates 30¢ postage was collected from the recipient. This was a lot of money to mail a letter, but rates were calculated by a combination of distance traveled and weight of the letter.

Another kind of stampless cover is shown in Figure 2. This is an air letter of a type used by Canadian forces at the end of World War II. No stamps were needed because the sender was on active duty. The postmark is interesting. Within a double circle is "Mombassa" and "Paquebot." Mombassa is a Kenyan port city. "Paquebot" means the air letter originated on a ship or boat. The cover is postmarked Oct. 26, 1946.

Air letters are similar to stampless folded letters. They are single sheets folded in such a way that the address is on the outside and the message is contained within.

This air letter offers a lot of extra information. The letter was written at sea aboard the SS Orontes on Oct. 18, 1946. A Royal Canadian Navy midshipman serving aboard the HMS Jamaica signed it. A postscript asks who won the World Series. A penciled notation above the question states "Cardinals 8; Dodgers 4." This may not be postal history but adds interest to the story told by this air letter.

The cover shown in Figure 3 has literary, geographical and aviation connections.

Richard Halliburton was a world traveler who visited exotic locations and wrote popular books about his travels. In 1931-32, he and Moye Stephens flew around the world in a Stearman biplane dubbed the Flying Carpet. Halliburton's book about their exploits is titled, appropriately, The Flying Carpet.

In January 1932, they flew as close as anyone ever had to Mount Everest, but their plane's ceiling was lower than the mountain top. This cover, one of 50 they carried on the flight, was mailed Jan. 1, 1932, from Calcutta to the secretary of the Indian Air Mail Society. It carries a bookful of information.

One label says, "MOUNT EVEREST TRIP." Another traces their route from Dum Dum to Bagdogra. A purple handstamp proclaims "American Fliers In 'Stearland' (sic), Biplane." Halliburton signed the cover across the top.

Figures 4 and 5 show the front and back of a cover sent from Fiji to Canada. The front of the cover reveals that it was sent by registered airmail, as evidenced by the airmail label and boxed registration handstamp on its top left.

The cover is postmarked Nausori, Fiji, Feb. 20, 1948, and it bears a large, handwritten "R" for registered mail. Six different transit markings on the reverse mark the route the letter took. From Nausori, Fiji, the letter went to Suva, Fiji, on Feb. 21, 1948, and then to Vancouver, British Columbia, on Feb. 25, 1948. There are two different Toronto postal markings dated Feb. 27, 1948. The cover arrived in London, Ontario, the same day. It traveled quite a remarkable distance in only one week in 1948.

During times of war, postal communications are subject to examination by military or civil censors who determine if the letter contains sensitive information of military significance. Figure 6 shows a cover sent during WWII from New Caledonia in the Pacific Ocean to the United States.

The cover, postmarked Noumea, Aug. 11, 1944, was slit open and resealed on the right side by a censor, using pink sealing tape bearing a French inscription that translates as "Opened by the censor – New Caledonia."

The numbered circular censor handstamp in purple at the lower left of the cover identifies the censor who examined the contents. A U.S. censor using cellophane "Examined by" tape resealed the left end of the envelope. This tape typically turns brown and brittle over time, leaving a greasy spot on the cover. Nevertheless, collectors eagerly seek such dual-censored covers.

The cover shown in Figure 7 resembles the censored cover shown in Figure 6, but it is significantly different. The letter was sent July 1, 1966, by airmail from Balham, a London suburb, to Chicago. There are bright red "London Postal Customs" handstamps front and rear. The left side of the envelope was resealed with a label that reads "Customs and Currency Examination The Post Office in the United Kingdom opened this package for examination by Customs and have resealed it."

Customs officers may open mail believed to contain currency, contraband or dutiable goods. The customs officers in Britain were extra vigilant then because of Irish Republican Army terrorism.

The stories these covers tell add a great deal of interest and excitement to any collection. What stories are your covers trying to tell you?