Marginal markings: Collecting on the edge 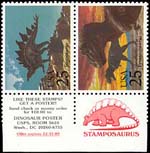 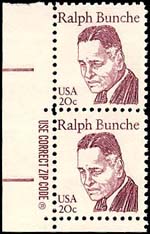 Figure 6. A vertical pair of U.S. 20¢ Ralph Bunche stamps, Scott 1860, with guidelines for the electric eye perforator in the selvage. 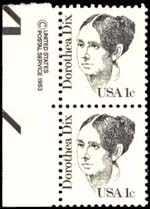 Figure 5. A vertical pair of the U.S. 1¢ Dorothea Dix stamp, Scott 1844, with control marks in the selvage for printing and perforating. 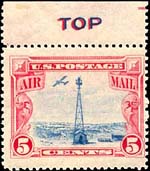 Figure 2. The blue over red "TOP" markings in the selvage of this 5¢ Beacon airmail stamp increase its value. 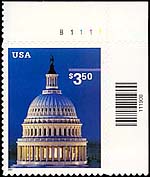 Figure 10. A U.S. $3.50 Capitol Dome stamp with scannable Universal Product Code bar code in the side selvage, plus the plate number. 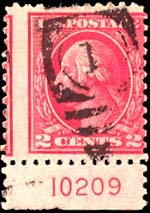 Figure 1. A marginal marking (the plate number) identifies this 2¢ deep-rose Washington stamp as Scott 500.
Previous
Next

Two people are in the post office, preparing to put newly purchased stamps on outgoing mail. For the purpose of this exercise, let's pretend that water-activated, lick-and-stick, stamps, are still available. One person tears off all the paper around the stamp and sticks only the actual stamp on the letter.

The other person chooses a corner stamp from her purchase and carefully tears it away from the others, leaving the paper around the two outside edges, and sticks the whole thing on the envelope.

Which person probably is the stamp collector? Yes, that's my guess too: the person who treats the margin paper, or selvage, as part of the stamp rather than as waste paper.

To the general public, on the other hand, everything but the stamp itself is just disposable packaging.

A lot happens in the straightedges of stamps, and, while few will want to collect margins instead of stamps, being able to interpret marginal markings can add both fun and value to your collecting.

It's worth noting that collectible positions of stamps usually depend on their locations relative to the margins.

On United States and worldwide stamps, the markings printed in the margins serve various purposes.

Many of the markings are utilitarian devices related to the process of printing the stamps. Some provide additional information about the stamp subject.

Some marks help the printers orient the stamp paper correctly on the presses and perforating machines. Others assist in keeping count of the number printed, help to maintain accuracy of the ink colors being used, or keep track of the printing plates used for the press run. Some simply state the name of the printing contractor.

Other markings are informational, advisory or promotional in nature.

Some of the most recent types of markings perform inventory and accounting functions.

Among the earliest and best known stamp selvage markings are plate numbers.

The basic collectible unit of a plate block for much of the 1950s and 1960s was four attached stamps, two across and two down, with all adjoining selvage paper in addition to the section with the plate number.

When U.S. stamps began to be printed by the gravure process, multiple plate numbers appeared in the selvage, and the old four-stamp plate block format no longer held sway.

U.S. plate blocks could contain six, eight, 10, 12 or 14 stamps. So-called floating plate numbers began in 1976. They resulted from the use of printing cylinders that printed units of 23 rows of stamps that then were cut into panes of 10 rows.

The configuration of markings on each pane depended on what portion of the cylinder printed that group of stamps.

Plate numbers are more than just specialized collectibles. They can help tell the difference between a valuable stamp and a look-alike, inexpensive relative.

The heavy cancellation on the U.S. 2¢ deep-rose Washington stamp pictured in Figure 1 obscures the characteristics that differentiate between the types of the large and complex 2¢ red Washington stamp family. Is this stamp Scott 499 — catalog value 25¢ — or is it Scott 500 — value $225?

While the stamp's centering is poor, the plate number 10209, proves that this is an example of the higher-valued Scott 500. The present owner of this stamp is very grateful that no previous owner ripped off that scrap of margin.

Consulting the Scott Specialized Catalogue of United States Stamps and Covers is helpful when trying to determine plate block configurations and consequent values. For maximum value, a block should have the number and format of stamps designated in the catalog, with all its margin paper intact and undamaged.

In the backwash of the printing mishap that produced the 24¢ Inverted Jenny airmail stamp, Scott C3a, the word "TOP" was added in the upper margin of U.S. bicolor flat-plate-printed stamps.

The word was supposed to be in red on one side of the plate for the 1928 5¢ Beacon airmail stamp, Scott C11, and in blue on the other, but, as Murphy's Law predicts (if something can go wrong, it will), some 5¢ Beacon stamps ended up with TOP in both blue and red inks in the same position.

The two-TOP version, an example of which is shown in Figure 2, is a Scott-listed plate block variety with a substantial premium value, all thanks to the attached marginal inscription.

When it comes to value-added selvage, the stamps of Israel often come to the mind.

Israel issues stamps with elaborate selvage obviously intended to stay attached to the stamps. These margins are known as tabs.

The 5-shekel Yitzhak Rabin stamp, Scott 1249, shown in Figure 3, is an example of a tabbed Israeli stamp. The design continues into the selvage with an explanatory text in Hebrew and English.

A mint Israeli stamp is often much more valuable with the tab.

Other production-related marginal markings include various color blocks or circles that act as checks for color accuracy during the press run.

They vary according to the type of press used. One type of color-control marking is shown in Figure 4, in the selvage of a pair of U.S. 25¢ Dwight D. Eisenhower stamps, Scott 2513. The selvage also has biographical notes.

Other selvage marks related to stamp production, such as those that check proper registration or serve as trimming guides, include crossed lines, arrows, and lines parallel, perpendicular and at angles to the stamps, as demonstrated by the vertical pair of U.S. 1¢ Dorothea Dix stamps, Scott 1844, shown in Figure 5.

The marginal lines on the vertical pair of U.S. 20¢ Ralph Bunche stamps, Scott 1860, shown in Figure 6, are electric-eye perforator markings. They guided the machine in aligning the vertical and horizontal perforations between the printed images.

Informational and advisory marginal markings on U.S. stamps have included various requests to use ZIP codes on mail, with words or with the cartoon character Mr. Zip.

U.S. stamp blocks that include ZIP code messages are cited and valued in the Scott U.S. specialized catalog.

Other U.S. marginal messages have urged users to "Mail Early in the Day."

Since Jan. 1, 1978, U.S. stamps have carried copyright symbols and notices in the selvage.

Some U.S. selvage inscriptions served as sales pitches. A cartoon dinosaur and an ad for a $10 poster is printed in the selvage of the se-tenant pair of 25¢ Prehistoric Animals stamps, Scott 2422 and 2424, shown in Figure 8.

Recent selvage additions include one marking of collector information and two for postal accounting efficiency.

A little shaded margin diagram in the selvage of the U.S. 32¢ Edward Hopper stamp, Scott 3236p, shown in Figure 9, demonstrates the position the stamp's pane had in the larger press sheet.

To help postal clerks and aid inventory and accounting, arithmetic began to be added to U.S. stamp margin paper in 1994.

The number of stamps in the pane times the price per stamp is multiplied to show the total cost of the pane. Many other countries' stamps over the years have included similar marginal numbers to assist in inventory.

The $3.50 Capitol Dome stamp, Scott 3472, shown in Figure 10, is bar coded with its postal product number, which is also its order number at the Stamp Fulfillment Services center in Kansas City, Mo.

Marginal markings don't always add to the value of a stamp, but noticing them definitely adds to the entertainment value of the hobby.

Keep your eyes on the edges.