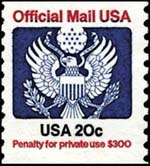 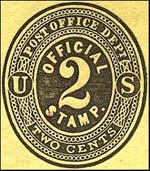 If you're looking for a new collecting specialty involving United States stamps and other issues, give Official Mail stamps, also known as departmental stamps, a try. For one thing, it would be a finite challenge, because we've probably seen the last of the U.S. Official Mail stamps. It would, however, be somewhat expensive.

Nothing is more official in the United States than the federal government. Official Mail stamps were developed in the 19th century as a means of accounting for postage on mail sent by various federal departments.

The story of Official Mail stamps is related to the franking privilege, the benefit of sending a piece of mail free by signing it rather than paying postage.

The franking privilege began in 17th-century England, and the idea was adopted by the Continental Congress in 1775 and written into U.S. law in 1789. Those enjoying the privilege included the president, Cabinet secretaries, members of Congress, and some executive branch officials.

The privilege intended to facilitate communication between citizens and their elected representatives, but abuses abounded. Some elected officials supposedly free-franked their laundry to send it home, or allowed family and friends to use their signature.

Critics accused incumbents of flooding the mails with self-promotional materials to promote re-election.

The Post Office Department had a huge deficit after the Civil War. John Luff's Postage Stamps of the United States quotes the postmaster general's 1869 report as stating that 31,933 people had the franking privilege at an estimated cost of $5 million for the POD. The 1872 Republican party platform included a plank endorsing the elimination of the free frank.

In related legislation passed March 3, 1873, Congress appropriated a sum of money for the purchase of postage stamps for the use of various government departments, with the stipulation that, as the law read, "the Postmaster General shall cause to be prepared a special stamp or stamped envelope, to be used only for official mail matter for each of the executive departments."

The stamps or envelopes were to be sold to the departments at the price for which "stamps and stamped envelopes of like value" were sold in post offices. The departments were Agriculture, Executive, Interior, Justice, Navy, Post Office, State, Treasury and War.

This ruling was intended to provide accounting for services provided by the POD for the departments and to help reduce the postal deficit.

The speedy production was possible because, with the exception of the stamps for the Post Office Department, all the departmental Official stamps used the same central designs (vignettes) as the regular-issue postage stamps of 1870-71, which featured profile busts of various U.S. statesmen.

Official stamps are prefixed with the letter "O" in the listings in the Scott Standard Postage Stamp Catalogue and other Scott catalogs. The listings are located after postage due stamps but before newspaper stamps.

Interestingly, the Post Office Department chose not to use the vignettes of the regular postage issues. It created instead a new design for its 10 values. This design was printed in black and depicted only a large numeral for the value within an arc that said "OFFICIAL STAMP."

Why the special post office design? Western Stamp Collector in February 1949 quoted "a newspaper clipping of 1873" as follows: "This difference was made in the post office stamps so as to leave the thirty thousand postmasters no excuse for pleading mistakes. They are always to know the difference between a post office stamp and any other. If this fails, it would appear necessary to adopt a new stamp as large as a poster. The intelligence of the postmasters is certainly not rated at a very lofty standard by the authorities at Washington."

This story may be dubious, but it is the only contemporary explanation found in a brief survey of the subject.

Official stamped envelopes also were printed in 1873, for use by the Post Office Department. These are designated in the Scott Specialized Catalogue of United States Stamps and Covers with the prefix UO. The imprinted design of Scott UO1, is illustrated in Figure 3.

A new law in August 1876 authorized the departments of State, Treasury, War, Navy, Interior and the Attorney General to requisition postage stamps for departmental use, with the cost to be credited to the POD for each fiscal year.

The next major change came soon after, in March 1877, with a congressional act authorizing the executive departments of the government to provide necessary envelopes for itself with the endorsement "Official Business," with a misdemeanor charge and fine of $300 for any person avoiding payment of postage by using any such Official envelope.

Official stamps were resurrected in 1910 for use in the U.S. postal savings program. These stamps are listed in the Postal Savings Mail section in the Scott catalog, numbered O121-26. This program also included three stamped envelopes, Scott UO70-72, and one postal card, Scott UZ1. These usages ended in 1914.

Like a phoenix, the matter of departmental postage accountability arose yet again in 1983, this time with the words "Official Mail" printed on the new postal issues.

The vignette did not mimic any existing design. It was a brand-new image using the Great Seal of the United States, shown on the 20¢ coil stamp, Scott O135, pictured in Figure 4.

Official Mail stamped envelopes, issued both with and without windows, use an embossed version of the Great Seal design. A first-day cover of a 20¢ Great Seal Official Mail envelope, Scott UO73, is shown in Figure 5.

Many modern Official Mail envelopes were used only for specific purposes, such as to mail passports or savings bonds, as with Scott UO75, a first-day cover of which is shown in Figure 6.

In 1995 a 32¢ stamp and envelope were issued for Official Mail purposes, but the United States Postal Service was hoping to have a new accountability program in place before the next rate increase, scheduled for January 1999.

Many departments were already using postal meters on their mail rather than stamps or stamped envelopes, but a postal official was quoted in print in 1999 as saying that Official mail accounted for about 40 percent of deficient postal revenues in 1998.

Eventually a 33¢ Official Mail stamp had to be issued, and Scott O157, a Great Seal coil stamp released on Oct. 8, 1999, became what probably is the last of its kind.

A recent search on the USPS web site reveals nothing for "Federal Postal Payment Card," while "Official mail" remains a subject heading with several dozen sub-categories in the USPS Directives and Forms Catalog.

Something similar to the FPPC idea, but with meter-like imprints, seems to be described in the USPS handbook for post offices serving Department of Defense installations.

Under "Official Mail Metering," this publication instructs its mail-handlers that the DOD "is in the process of implementing 'Postage on Line,' particularly for smaller installations that currently use postage stamps. This marketing initiative will allow low-volume stamp users to print the equivalent of meter strips on their own personal computer."

Collectors of U.S. Official mail should watch for new developments, but we probably have seen the last U.S. Official Mail stamps and postal stationery. But that is probably what collectors thought in 1914 too, so who knows.