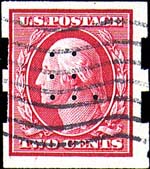 Figure 6. This Schermack coil has a perfin pattern that can be traced to a Detroit business firm. Schermack perfins are listed in the Scott U.S. specialized catalog. 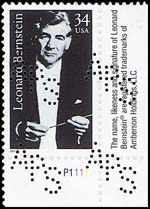 Figure 5. This 34¢ Leonard Bernstein stamp shows perfins from the APS British-made perfin machine that punches a set of four initials at a time. 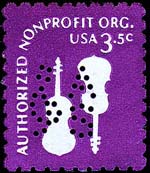 Figure 4. Americana series 3.5¢ Weaver Violins stamp perfinned by a music topical collector whose personal perfin is a G clef and his initials, "A" over "S."

Figure 1. Shown back and front on two different stamps, this perfin was used by the state of Illinois.
Previous
Next

Most postage stamps have holes — perforations — around their edges, but some stamps have holes punched right into the design of the stamp. These holes, which form some type of pattern, have been added not as part of the production process, but at a later time by the users of the stamps. The holes are called perfins, and collecting them is an entertaining specialty.

The Perfins Place web site http://members.aol.com/perfins, maintained by Joe Coulbourne, is a useful and informative resource.

He gives this definition of a perfin: "A perforated design, symbol, insignia, letter, or group of letters in a postage stamp placed there by an individual, organization, or government agency for the purpose of controlling the stamp's postal use."

"Spifs" is another name for these stamps that doesn't see much usage anymore, other than in Britain. It is an acronym for the contrived and not entirely accurate description "Stamps Perforated with Initials of Firms and Societies."

The description is contrived and inaccurate because the types of perforated additions include more than just initials, and organizations that are neither firms nor societies have used them. For example, Figure 1 shows a perfin, back and front, that resembles a mitten with a stylized dog bone in the center. In reality, the perfin is an outline map of Illinois, with an "I" for the state's initial. It was used by the Illinois state government.

Some other definitions of perfins usefully mention the important point that the holes prevent unauthorized use of the stamp.

Well into modern times, postage stamps were often used in many places as cash in small transactions. In Great Britain this stamps-as-cash scenario went further. Post offices would redeem stamps for cash if the trade-ins were in pairs or larger multiples.

Businesses with an inventory of postage stamps had to guard against employee theft of these tangible assets, which could be taken for personal postal use, sold to other businesses or offered in lieu of cash for goods or services.

Stamps with perfins added as security devices became marked money, not easily negotiable outside the office mailroom where it could be plainly seen that they belonged to a business.

The "BAP" perfin of the Barber Asphalt Paving Company of Philadelphia, an example of a simple and legible business perfin, is shown in Figure 2.

A slightly more elaborate set of initials is illustrated by the cover shown in Figure 3. The Automobile Division of the Pennsylvania Highway Department would not have been as busy in 1916 as its modern-day counterpart, but it was already up to operator license No. 34,826 according to the license card being mailed in this cover. The Department guarded its postage supply with a rather elegant "SHD" perfin.

The concept of perfins is credited to Joseph Sloper, a British inventor who had already developed a pin perforating machine. In 1868 the General Post Office granted permission to Sloper to perforate initials on postage stamps on behalf of his business clients.

A 1998 Linn's Refresher Course cited and illustrated the earliest known U.S. perfin use on cover much later: May 26, 1908, on the 2¢ Washington and Shield stamp of 1903. The envelope bore the corner card (return address) of B.F. Cummins Co., a perforating machine manufacturer in Chicago.

Postage meters eventually minimized the use of actual stamps and the need for perfins in the business world, but perfins persist to the present day throughout the world.

Perfins have been produced in more than 200 countries. A checklist of countries is available at the Perfins Place web site mentioned earlier.

Early stamp collectors often considered perfinned stamps as damaged and discarded them. Existing quantities of perfins today do not accurately reflect the level of their use over the years.

In the United States, it is permissible to have your own personal perfin. The ability to mark stamps with perfins is not restricted to businesses or other corporate entities. Section P022.1.5, Postage Stamps, of the Domestic Mail Manual of the United States Postal Service, specifies, "Perforating: Postage stamps may be marked with perforation holes. The mark may not cover more than ¼ square inch (½ inch by ½ inch) of the stamp, and the diameter of the holes may not exceed 1/32 inch."

A music-topical collector in the United States uses a personal perfin consisting of a treble clef (G clef) with his initials, "A" over "S," next to it, shown on a 3.5¢ Americana series Weaver Violins stamp pictured in Figure 4.

Many current users of private perfins are members of the Perfins Club, an affiliate of the American Philatelic Society. This group publishes the Perfins Bulletin 10 times a year and offers a variety of other services such as auctions, sales circuits, publications and its own library. For membership information, write to the Perfins Club, Box 125, Green Acres, WA 99016-0125, or contact the president, Robert Szymanski, 10 Clarridge Circle, Milford, MA 01757.

Speaking of the APS, a very modern use of the APS perfin on a 34¢ Leonard Bernstein stamp on cover is illustrated in Figure 5. The stamp was issued on July 10, 2001. The APS perfin machine, a hefty steel device, was made to order in England several decades ago. A detailed report on the APS perfin machine was published in the American Philatelist in November 1984. Photocopies of this article are available for a modest fee from the American Philatelic Research Library, Box 8000, State College, PA 16803.

To revert from the modern to the classic, the item shown in Figure 6 is of interest because it represents one of the few perfins with a Scott catalog listing. The Vending & Affixing Machine Perforations section of the Scott Specialized Catalogue of United States Stamps and Covers lists the various private vending and affixing machine companies that perforated the coil stamps of 1906-12. The catalog listings for the Schermack Co. of Detroit, Michigan, give values for coil stamps with Schermack perforations and so-called perforated control marks.

Businesses using Schermack affixing machines applied the perfins as part of the process. A punch in the affixing machine added the perfin and then cut the stamp and affixed it to the cover. Each company had a different perfin, but all were based on variants of a grid of nine or twelve holes. Different patterns could be made by removing one or more pins from the punch grid. The Schermack coil shown in Figure 6 is missing pin numbers 3 and 6, and its source firm can be identified from literature on Schermack perfins as the C.A. Strelinge Co. of Detroit.

A perfin collection is fun to assemble and research, but not especially easy to show to advantage. Placing stamps on a black background, as shown in the worldwide assortment illustrated in Figure 7, usually makes the pattern of holes more obvious.

Depending on how the perfin was added to the stamp, it may also be helpful to mount the stamp design-side down on a black background. Without the visual distraction of the design, the pattern of holes becomes plain, but if it was perforated into the face of the stamp rather than into the back, it also may be backward.

Perfins of stamps on cover may be very difficult to identify, unless the return address or other information on the envelope or card provides clues to likely initials. Sometimes it is possible to raise the holes by placing a piece of lightweight paper, such as onionskin, over the face of the stamp, and then using a pencil to rub lightly across it. Unfortunately, with an engraved stamp, this technique also produces a penciled image of the stamp design, which is not really an improvement over looking at the stamp itself.

Identification of perfins is greatly assisted by the use of a good catalog or handbook. The APRL computerized catalog returns 151 entries for a subject search under perfins. The Perfins Club is responsible for a number of useful titles, including the Catalog of United States Perfins, and the World Perfins Catalog, published in individual sections for America, Asia and Europe.

Specialized works also exist on the perfins of Canada, Great Britain, Ireland, Bavaria, and a host of other places. In addition to country perfin collections, perfins also can be collected topically, by design, by type of use such as railroad-related perfins and by type of business firm. Some of these narrow specialties would result in very small collections, but the search would be fun.

Where do you find perfins? Anywhere you can find other stamps. A quick look at Linn's own Zillions of Stamps web site shows hundreds of perfins for sale ranging from Argentina to Western Australia with the majority priced less than $10.

During a recent visit to the site, I noticed a listing for a copy of Rhodesia Scott 112a, the 2/- gray-blue and black Queen Mary and King George V with a perfin, for $250. But the high price was because it was perforated gauge 15, not because it was perfinned.

Generally speaking, collecting perfins is one specialty that will fill the holes in your collection with holes in stamps without leaving a hole in your budget.