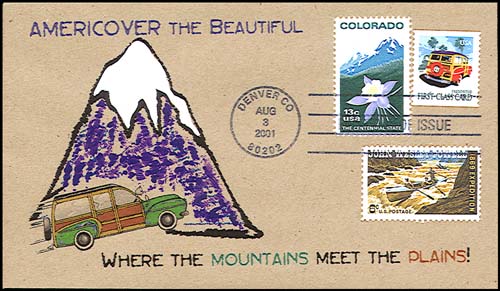 First-day covers, such as this one for the 2001 nondenominated (15¢) Woody Wagon stamp issued in Denver, Colo., are popular among stamp collectors. Click on image to enlarge. 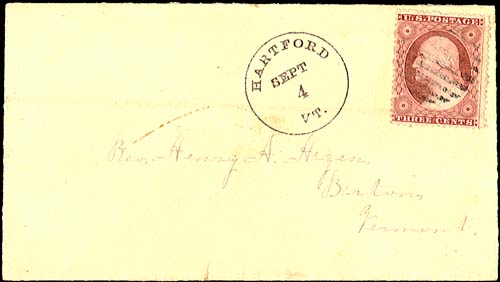 This pretty little cover would be an excellent addition to a collection of the postal history of Vermont. Click on image to enlarge. 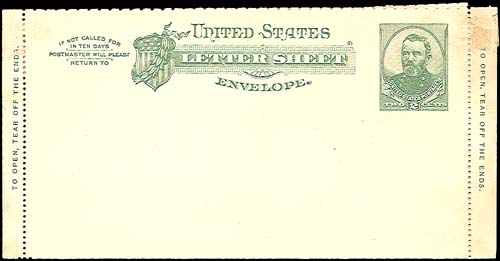 Letter sheets, such as this 2¢ Gen. U.S. Grant from 1886, are collected by those who prefer postal stationery. Click on image to enlarge. 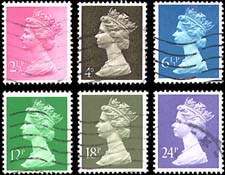 The Machin definitive stamp series of Great Britain is a popular collecting specialty area. Click on image to enlarge.

A topical collection of stamps picturing ships can pass the time of anyone who once dreamed of a life at sea. Click on image to enlarge.

Some collectors focus on only the stamps from a particular country, such as these three stamps from Canada. Click on image to enlarge.
Previous
Next

One of the best aspects of stamp collecting is that each collector is free to collect whatever he chooses. A collector can focus a collecting interest toward specific stamps or covers in many different ways.

Many collectors choose to collect based on what can be seen on a map. They collect the stamps or covers from a specific country or geographic area. A geographical collection of this kind can also be based on the political administration of a certain country.

Collecting stamps of countries ruled by Great Britain at a given point in history, for example, is a popular way to collect. Many stamp collectors in the United States choose to collect only U.S. stamps. Collectors in other countries do the same with the stamps of their own countries.

Collecting stamps from close to home ensures that old and new stamps will be readily available. The U.S. collector can soak stamps received on daily mail or in an on-paper mixture, and he can buy mint stamps at the local post office. The Canadian collector living in the United States can save stamps received in correspondence with friends and family back home.

Limiting your collection can enhance your enjoyment of the hobby. Choosing to collect based on geography is often the easiest way to define a collection because the vast majority of stamp catalogs are organized by country.

Another popular way of defining a collection is to choose stamps based on what they picture. This is called topical collecting. Collectors who have specific personal or professional interests might decide to collect only the stamps that relate to that interest or theme. The topic chosen can be as broad or narrow as the collector wishes it to be.

A teacher might choose to collect only stamps with an educational theme, stamps that picture teachers or stamps that illustrate only a particular teaching specialty. A person who enjoys playing tennis might choose to collect stamps that feature tennis players and related matches and equipment. The stamps picturing ships shown in Figure 2 might begin a topical collection for a sailor or a person who lives near water or someone who once dreamed of a life at sea.

A topical collection can contain only those stamps that fit into a narrow definition of a chosen topic, or it might include stamps that relate thematically to background information for a topic. When choosing to collect based on geography or topic, collectors sometimes find themselves drawn to a particular stamp or series of stamps. This attraction also can lead to a specialized collection.

A single-stamp specialized collection would include its different varieties, such as different printings, perforations, gums, colors, errors and freaks, and tagging. Covers showing the proper use of the stamp for postage would also be included in the collection, along with any unusual uses.

Collecting stamps of a particular series is a broader specialized collection. Many collectors of British stamps focus on the Machins, the British definitives picturing the sculpted image of Queen Elizabeth II by Arnold Machin. Figure 3 shows six Machins.

Some collectors choose to focus on stamps that have a special purpose, such as special delivery, postage due, Express Mail or Priority Mail, or airmail. They might even opt for stamps that are used for purposes other than postage, such as newspaper tax stamps and migratory bird hunting stamps, more commonly known as duck stamps.

Others might choose to collect postal stationery. Postal stationery is any letter sheet (including an aerogram), postal card or stamped envelope upon which a postal authority has printed a designation indicating that item's postal validity, usually an imprinted stamp. The 1886 U.S. 2¢ Gen. Ulysses S. Grant letter sheet is shown in Figure 4, as folded.

Some collectors prefer to collect only uses of stamps rather than the individual stamps themselves. This is often called postal history collecting. Postal history enthusiasts often choose items for their collections based on their movements through the mail. Postal history tells the story of how a piece of mail was handled, who handled it and why.

Postal historians must learn a lot to be able to interpret a cover based on its postal markings. Often postal historians will base what they collect on geography. The cover shown in Figure 5 would be a lovely addition to a collection of the postal history of Vermont.

A popular collecting area of long standing is first-day-cover collecting. A first-day cover bears a stamp canceled with the date that it was issued. Often an FDC is decorated with some type of artwork. This artwork is called a cachet. Figure 6 shows a first-day cover for the 2001 nondenominated (15¢) Woody Wagon stamp issued in Denver, Colo.

In the United States, first-day covers bear a cancel for the city in which the stamp was officially issued. Unofficial first-day covers are canceled on the day of issue but in a different city. Interesting unofficial FDCs often bear postmarks that somehow relate to the stamp.

In some countries, such as Canada, the postal administration issues its own FDCs. These have a common cachet and bear a cancel for the issuing city. Unofficial FDCs in these countries are any other covers bearing a first-day cancel.

An FDC collection can include an example of a cover for each modern issue of a particular country. It also can be based on a particular cachetmaker. A collection of first-day covers might include only FDCs for a single stamp. A great challenge would be to find all the known cachets and cities for a particular issue.

More of a challenge than first-day-cover collecting is finding covers bearing stamps canceled before their official day of issue. Such covers are called early uses, and the oldest one for a given stamp is called the earliest-known use.

Another possible focus for a collection is the issuing format or unit of a stamp. Some collectors save only booklet stamps or coil stamps. Others insist on saving certain units, such as plate blocks or plate number strips, or booklets and booklet panes.

Other marginal markings, such as color bars or illustrations of Mr. ZIP, might define a collection. Some collectors choose to focus only on mistakes. These collectors of errors, freaks and oddities like stamps with missing or misregistered colors or perforations, or inverted design elements.

Stamp and cover collections can focus on anything at all. A collection might contain stamps of a certain shape, a particular color and, in recent years, even smell, such as Brazil's 1999 Forest Fire Prevention stamp that smells like burnt wood.

Whimsical collecting areas can include odd-shape or odd-size covers; unusual stamps, such as those bearing holograms or embossed foil; or covers canceled on a particular date, such as your birthday. A collection might consist of, or at least include, forgeries of stamps or counterfeit covers. It is even possible to collect covers that have been mailed without stamps at all, either those from before stamps were used or others bearing labels that were not valid for postage (called cinderellas).

The possibilities for defining your collections are limitless, and they are entirely up to you. Such flexibility is only one reason that stamp collecting is the most widely practiced hobby in the world.