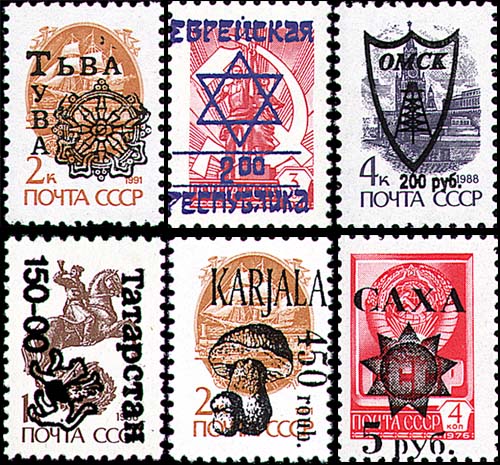 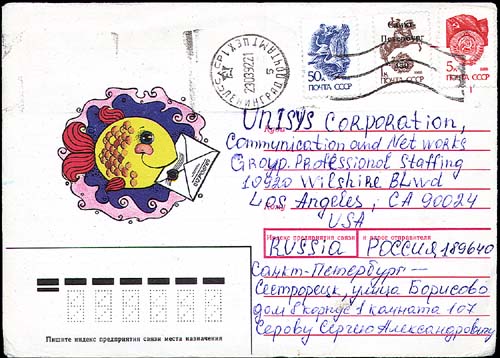 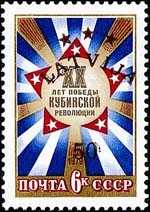 A Latvian 50-ruble overprint and surcharge on a Soviet 6-kopek commemorative stamp, Scott 340.
Previous
Next

The stamp world is awash in a bewildering array of overprinted stamps of the late and unlamented Soviet Union. What is a collector to make of them?

For most Americans, the name Soviet Union was synonymous with and was used interchangeably with the name Russia. This is inaccurate, misleading, and, in short, just plain wrong.The Union of Soviet Socialist Republics existed for about 70 years, from 1922 to 1991.

Although it was in a sense dominated by Russians, many best known Soviet leaders, including Dzerzhinski, Trotsky, Stalin, Beria and Kruschev, were not ethnic Russians.

In reality, the Soviet Union was a multinational empire comprising 15 Soviet republics and hundreds of ethnic groups.

At the end of World War I, the Bolshevik Revolution in Russia retarded and in some instances reversed the process of nationalism by cobbling parts of the disintegrating Russian Empire back together under an ideological rather than a dynastic guise.

During its lifetime, the USSR was a prolific issuer of postage stamps.

When the USSR finally collapsed in 1991, some of the first postage stamps of the newly independent successor states were overprints of Soviet stamps.

The challenge of collecting, classifying and winnowing the wheat from the chaff of overprinted Soviet stamps is either the opportunity of a lifetime or an impenetrable philatelic quagmire, depending on your point of view.

At the top of the heap are overprinted stamps unambiguously sanctioned by national postal authorities and given Scott catalog recognition. Even here, however, there are problems, as overprints are notorious for being more easily forged than entire stamps and stocks of invalidated Soviet stamps are readily accessible to forgers.

Latvia, one of the Baltic republics that had previously enjoyed independence from 1918 to 1940, made liberal use of overprinted Soviet stamps, issuing 12 from 1991 to 1993. A Latvian 50-ruble overprint and surcharge on a Soviet 6-kopek commemorative stamp, Scott 340, is shown in Figure 1.

Moldova, seized from Romania by Stalin in 1940 as part of the Nazi-Soviet Pact, also found need for overprinting old Soviet definitive stamps, issuing nine such, three of them as late as April 1994. Moldovan Grape Cluster overprints and surcharges, a 45k on Soviet 2k stamp on the left and a 3-bani on Soviet 1k stamp on the right, Scott 43 and 114A, respectively, are shown in Figure 2.

Kyrgyzstan, Tajikistan and Uzbekistan, three of the five Central Asian Republics, also resorted to overprinting and surcharging Soviet stamps for their postal needs.

Of the nations freed by the collapse of the USSR, the national postal administrations in Russia, Lithuania, Estonia, Ukraine, Belarus, Armenia, Georgia, Azerbaijan, Kazakhstan and Turkmenistan eschewed overprinting old Soviet stamps for their postal needs. Be doubly wary of overprinted Soviet stamps in the marketplace purporting to come from these countries.

Further complicating the issue are stamps that were overprinted by local authorities to meet genuine postal needs when the central government was unable to provide appropriate stamps.

These stamps often saw extensive postal use, but they are not yet listed in the Scott catalog because of editorial questions about whether they were authorized by the national postal authority.

Chief among these are the Ukrainian Trident overprints issued by postal authorities in Kiev, Lvov and Chernihiv, Ukraine. The trident is the national symbol of Ukraine.

A pair of overprinted and surcharged stamps showing negative and positive Trident overprint types is shown in Figure 4.

Ukraine made extensive use of Trident overprints on Russian stamps during its first period of independence, 1918-1923. That precedent was followed in 1992 when Soviet definitives were overprinted and surcharged by local postal authorities.

Distribution problems kept the first four Ukrainian commemorative stamps, issued in early 1992, from reaching postal outlets. Soviet stamps were still postally valid in Ukraine in early 1992, but they were of such low denominations that they were virtually useless in the face a 900 percent increase in postal rates.

To meet postal needs, local postal officials in Kiev, Lvov and Chernihiv were authorized by Ukraine's ministry of communications to overprint and surcharge low-value Soviet definitive stamps. Chances are, if you got a letter from Ukraine in early 1992, it would have been franked with one of these Trident overprints.

Other local Ukrainian overprints not authorized by the ministry of communications (many of which saw postal duty) and forgeries and intentionally manufactured so-called error stamps abound.

Ownership of or ready access to The Provisional Postage Stamps of Ukraine 1992-1995 by Hryhoriy Lobko and Handbook of Modern Ukrainian Philately by George D. Fedyk and Ingert Kuzych is a must for collecting these stamps.

In March and April 1992, city and regional authorities in St. Petersburg authorized the surcharging and overprinting of low-value Soviet stamps to meet rising postal rates and stamp shortages.

These stamps saw extensive use until they were withdrawn and invalidated in May 1992.

Because they were not issued by the Russian Federation postal authority, they are not listed in the Scott catalog. They are listed in Stanley Gibbons Stamp Catalogue Part 10, Russia.

A 450k on 1k brown St. Petersburg locally overprinted stamp, Stanley Gibbons SP6356, on a cover postmarked March 23, 1992, to the Unisys Corporation in Los Angeles, Calif., is shown in Figure 5.

A group of overprinted Soviet stamps with an even more tenuous grip on postal legitimacy are those stamps overprinted for use in breakaway republics not given de jure recognition by other governments or by the Universal Postal Union.

One such area is the Transnistrian Moldavian Republic, which has been in revolt from Moldova since 1991. Soviet stamps overprinted "PMR" in Cyrillic letters are from Transnistria.

Transnistria is that part of Moldova east of the Dniester River. Transnistria is populated mostly by ethnic Russians and Ukrainians. The Transnistrian government has de facto control of the area but lacks de jure recognition.

Transnistrian stamps are used to pay for local mail delivery within Transnistria. Delivery of mail beyond Transnistria requires Moldovan stamps.

Another breakaway area that has overprinted old Soviet stamps is Abkhazia.

Abkhazia is the northernmost province of the Republic of Georgia. The Abkhazians are ethnically and linguistically distinct from Georgians. While most Georgians are Christian, most Abkhazians are Muslim.

Abkhazia and Georgia went to war in 1992. By 1993 Abkhazia managed to expel Georgian troops and establish control of the territory. Russian intervention has, so far, prevented a resumption of general hostilities.

Abkhazian stamps might be delivering the mail locally, but they are not recognized beyond the breakaway republic. Transnistrian and Abkhazian overprinted stamps are shown in Figure 6.

Lastly there are the overprinted Soviet stamps lacking any postal validity that have been produced primarily for sale to stamp collectors.

Soviet stamps always had low face values. As the USSR came crashing down around the ears of ex-Soviet citizens and inflation reached triple figures, many found themselves in possession of panes and panes of old Soviet stamps that literally were not worth the paper they were printed on.

Reams of old Soviet stamps could be given spurious overprints by anyone with access to a printing press.

Nowhere was this more true than in the Russian Federation, where local overprints produced from scores of republics, okrugs, oblasts, krays and cities, sometimes with the tacit approval or collusion of local postal authorities, began to find their way into the stamp market while the corpse of the USSR was still warm.

Overprinted stamps from Tuva, Jewish Autonomous Republic, Omsk, Tartarstan, Karelia and Sacha are shown in Figure 7. They are but a small sampling of locally overprinted Soviet stamps that have been issued, the great majority of them lacking any postal validity

There are literally thousands more. Such material can be great fun to collect, as long as you know what it is that you are collecting.