'Indiana Jones and the Lost Temple of Stampdom' collection 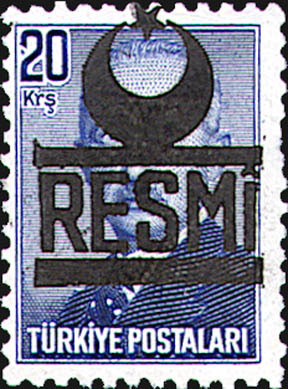 Even members of the public who know nothing about stamps often have heard of the Inverted Jenny 24¢ airmail stamp. 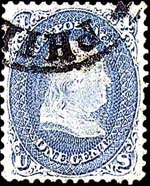 The British Guiana 1¢ stamp printed in black on magenta paper is unique. It would be nice to find another in better condition. 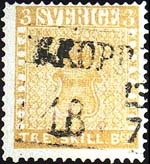 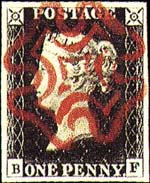 The Number One of Number Ones, Great Britain's Penny Black of 1840, the world's first adhesive postage stamp.
Previous
Next

Legendary postage stamps probably will never feature prominently in a Lara Croft or Indiana Jones movie, such as Tomb Raider or Raiders of the Lost Ark. It's unlikely that you will ever see a movie in which a bosomy or stubble-faced, khaki-clad adventurer scrambles up a grotesque pagan idol in an exotic land to pluck a highly coveted stamp from the idol's scowling brow.

This doesn't mean, however, that the stamp hobby lacks its own Lost Ark, King Tut's treasure, Holy Grail, Hope Diamond or Star of India. Many stamps are legends of the hobby, some as rare as rare can be — only one known — and others are famous for reasons of timing or an unusual appearance. The five stamps profiled in this column are among the most celebrated postal items of the last two centuries.

Some collectors specialize in what are known as Number Ones — the stamp designated number one in each country's section of the stamp catalog. In those terms, the Number One Number One is the Penny Black, Great Britain Scott 1, the 1-penny Queen Victoria definitive stamp of 1840, shown in Figure 1.

As the first adhesive stamp created and sold by a national government for prepayment of postage, the Penny Black occupies a special place in any stamp collection. Issued on May 1, 1840, the gloomy little black stamp looks like it could be a mourning issue for the young monarch, Queen Victoria. Actually, she had a long life ahead of her at the time of its issuance, reigning until her death in 1901.

Several features of the Penny Black appear unusual to modern eyes. One is that it has no perforations (holes punched to allow easy separation of the stamps). Many early stamps were not perforated for easy separation. Users had to cut them apart. Another unusual feature is the use of letters of the alphabet in the bottom corners, opposite the decorative elements in the top corners. The stamps were printed in sheets of 240 (20 horizontal rows of 12 stamps each), and the letters indicate the position of each stamp in the sheet.

Another oddity is that the only words on the Penny Black are "POSTAGE" and "ONE PENNY." There is no country name inscribed on the stamp, an omission that, to this day, is allowed only on British stamps.

While undeniably famous and desirable, the Penny Black is neither extremely rare nor terribly expensive. The 2002 Scott catalog value for an unused Penny Black (that is, its retail value — the amount one could expect to pay for an example in very fine condition and without faults) is $3,000 for an unused stamp with original gum and $180 for a used one. The Penny Black shown in Figure 1 bears a red Maltese cross cancel, which carries a $10 premium in catalog value.

But, as long as there are stamp collectors, the Penny Black will remain in demand. Some collectors even make it a quest to find and collect a nice-looking Penny Black that bears their initials.

Next is a stamp once touted as the world's most valuable stamp. This was the case for a few years in the late 1990s, and the stamp is still no slouch as an expensive rarity. Sweden's 1855 3-skilling-banco stamp, Scott 1, is green (the Scott catalog calls it blue-green). This stamp also exists as a yellow error of color (called orange in Scott), Scott 1a, the gem known as the Three Skilling Banco.

Only one example is known of the yellow error stamp, shown in Figure 2. It was found in 1885 by a 14-year-old Stockholm schoolboy seeking to cash in on a local dealer's offer to buy 3sk-bc stamps of 1855 at a premium price.

The boy found one 3sk-bc stamp on a folded letter sheet among his late grandfather's correspondence along with some other 1855 stamps. The lad, Georg Wilhelm Backman, took his gleanings to the dealer, who glanced through them and offered 2 kroner or 3kr apiece.

Backman protested that a 3sk-bc stamp was supposed to bring 7kr. The dealer said he saw none in the pile, so Backman pointed to the yellow stamp. The dealer remarked that the stamp should be green, but he paid the 7kr. Soon after, a chagrined Backman read in the newspaper about an exhibition that the dealer was arranging in Stockholm with the yellow error stamp displayed as the pearl in the collection.

The 3sk-bc error-of-color stamp is printed on the same paper and in one of the three shades of color used for the 1855 8sk-bc stamp (Scott 4, orange; 4a, yellow-orange; 4b lemon-yellow). An explanation for the yellow error, offered by a Swedish expert in 1922, was that a cliche (a single stamp design that is part of a complete printing plate, pronounced klee-SHAY) of the 3sk-bc was accidentally inserted into the printing plate assembly for the yellow-orange 8sk-bc, perhaps to replace a damaged 8sk-bc cliche.

The 3SB changed owners four times in the 1920s, disappearing into anonymous hands in a 1927 private-treaty sale. It is currently in new but still unknown hands, after a private sale in 1998 through the David Feldman auction firm. The 1998 selling price of the 3SB is as secret as its buyer's name, but the 2002 Scott catalog values it at $3 million.

British Guiana was a colonial outpost of the British empire on the northeast coast of South America. You will see lots of zeroes to the left of the decimal points in the catalog values of many of its early stamps issued in the 1850s through the 1870s. No value, however, is listed for British Guiana Scott 13, shown in Figure 3, the Penny Magenta.

So far there is but one example of this 1856 1¢ stamp, printed in black ink on magenta-colored paper. This stamp is not likely to be coming on the market anytime soon, and putting a value on it probably seemed like a pointless exercise for the Scott catalog editors. The rarity was locally produced when postage stamps failed to arrive from London. The local printer produced crude-looking stamps to fill the breach, among them the 1¢ black on magenta paper.

Twelve-year-old L. Vernon Vaughan, a resident of the colony, found the only known stamp in 1873 among some old family correspondence. He soon sold it locally for the equivalent of about $1.50, which he used to buy stamps for his collection that looked better than this somewhat bedraggled, heavily canceled, scuffed and clipped stamp. Within a few years, the stamp was in the collection of famed collector Count Philippe Ferrari, who also once owned the Swedish 3SB error of color stamp.

From Ferrari the Penny Magenta went to eccentric millionaire Arthur Hind in the United States for $30,000. Hind's widow sold it in 1940 for an undisclosed price, but possibly as much as $75,000, to Edward Small, an Australian living in Florida. That sum was eclipsed within 90 seconds of the stamp's next appearance on the market in a 1970 Robert A. Siegel auction in New York City.

Bidding for a syndicate of investors, Irwin Weinberg, a dealer in Wilkes-Barre, Pa., won the stamp for $280,000. The British Guiana 1¢ black-on-magenta-paper stamp and Weinberg subsequently toured the international stamp world, but the syndicate returned the stamp to the Siegel auction block in 1980.

The successful bidder was John DuPont, yet another eccentric American millionaire. He paid $935,000 for the stamp and reportedly often slept with it under his pillow. DuPont now sleeps in a state prison, where he is serving up to 30 years after being found guilty but mentally ill in 1997 for the murder of a wrestling coach. The stamp is said to slumber in a vault in Philadelphia.

In 2000, a stamp purported to be an 1856 British Guiana 1¢ black on magenta paper was exposed by the experts of the Royal Philatelic Society of London as being an altered 4¢ stamp from the same issue.

Grills are embossed security devices used briefly on only three U.S. stamp series, beginning in 1867. A revenue protection measure, the grilled (broken) paper fibers absorbed canceling ink so deeply that the cancel could not be removed and the stamp reused.

In a neat twist on the usual story of other stamp gems, the schoolboy in this tale was not the finder but the buyer. Eleven-year-old Zachary Sundman did the bidding at the Siegel auction on behalf of his father, Donald Sundman, president of Mystic Stamp Co. of Camden, N.Y.

The 1¢ Z Grill, shown in Figure 4, was first sold by U.S. dealer-expert Lester Brookman in 1957. It changed hands three more times before the 1998 Siegel auction of the fabulous Robert Zoellner collection, where Sundman bought it.

The 1¢ Z-grill stamp is not unique. At least one other exists, but it is inaccessible, sequestered in the Miller Collection of the New York Public Library. The Sundman 1¢ Z Grill is in the Mystic Stamp Co. inventory, valued by the firm at $2.5 million.

Arguably the most famous United States stamp is the 1918 24¢ U.S. airmail inverted-center error known as the Inverted Jenny, for the Curtiss JN-4H biplane depicted in the vignette of the stamp, Scott C3a, shown in Figure 5.

Though neither as scarce nor as costly as the other stamps shown with this column, this stamp is familiar to many among the general public who wouldn't know the 1¢ Z Grill from the 3SB error. The bicolor airmail stamp was printed in two separate operations, with the blue frame printed first. Even the Bureau of Engraving and Printing was unable to explain what happened next.

As George Amick's definitive book Jenny! explains, the BEP once said the printing plate of the airplane had been reversed, but some years later it said that "the paper was turned the wrong way for the application of the second color."

However it happened, William T. Robey was the first beneficiary of the mistake when he went to a Washington, D.C., post office May 14, 1918, to buy some of the first U.S. airmail stamps. Robey bought a full pane of 100 stamps over the counter for $24.

This was a not a subtle error. Robey knew right away that he had more than his $24 worth. To be exact, he had $15,000 worth. That was the sum he realized from a deal brokered through a stamp dealer, who sold the pane, naturally, to yet another eccentric millionaire, Col. E.H.R. Green, for $20,000. Green broke the pane into singles and blocks, selling singles for $250 apiece.

Today, an Inverted Jenny comes on the market frequently enough to keep interest high. An unused, fine single has a 2002 Scott value of $170,000.

For exciting reading about dozens of celebrated stamps, buy the five-volume Philatelic Gems series, by Donna O'Keefe and published by Linn's. These books are available at www.amosadvantage.com, by phone at 800-572-6885, or from various philatelic literature dealers.