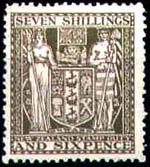 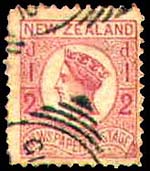 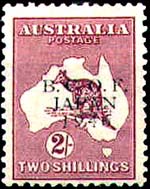 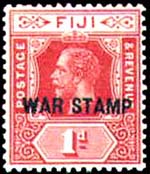 Postage stamps are issued to prepay the rates and fees for transporting a letter from one place to another. Some stamps, however, were issued to pay for special purposes, some unrelated to postal services. Special-purpose stamps are often called back-of-the-book stamps because the Scott Standard Postage Stamp Catalogue and some other stamp catalogs list them after the regular postage stamps.

Airmail stamps are perhaps the best known and most ubiquitous of the special-service postage stamps. These are issued in denominations needed to pay for the (usually higher) costs of sending a letter by airmail. Airmail stamps are listed in the Scott stamp catalogs with a "C" prefix.

Italy was the first country to issue an airmail stamp –– on May 16, 1917, when Italian postal authorities overprinted a 25-centesimo express delivery stamp for use on experimental airmail flights between Rome and Turin. Most of the stamp-issuing countries in the world have, at one time or another, issued airmail stamps. Great Britain is the most notable exception.

Express Mail is a service available in the United States that uses special purpose stamps. This service, which began in the 1970s, guarantees next day delivery for most addresses. The stamps, first issued in 1983, are usually colorful and oversized. These stamps can be used on other types of mail, although they are seldom seen other than in collector hands.

Many post offices do not stock them but use postage-value-indicated meter strips instead. Forming a collection of commercially used Express Mail stamps on cover is a worthy challenge. An Express Mail cover bearing a $10.75 Space Shuttle Endeavour Express Mail stamp, Scott 2544A, is shown in Figure 2. The Scott catalog lists Express Mail stamps with ordinary postage stamps because they can be used for all types of mail.

U.S. special delivery preceded Express Mail and is similar to it in some ways. Special delivery did not guarantee overnight delivery, but a special delivery letter required immediate delivery upon arrival at the destination post office. Such mail did not have to wait for the next regular delivery.

Because U.S. special delivery stamps paid only for the extra fee for this special service, they are among the few U.S. postage stamps issued after 1861 that are not valid for domestic postage today. Many countries issue Official stamps for use on correspondence sent by authorized government departments and agencies. These stamps may be specially designed for Official mail, but often they are ordinary postage stamps overprinted to signify their special purpose.

War tax stamps are a special type of revenue stamp that pay a tax on postal services. The money collected is not technically part of a postal rate because the post office does not keep the extra money. Rather, the tax collected by the post office goes into government funds to help pay for the costs of fighting a war.

Spain issued the first war tax stamps in 1874. Since then, many countries have issued war tax stamps. A 1-penny scarlet war tax stamp from Fiji, Scott MR2, is shown in Figure 5. Other countries, including the United States, have imposed a postal war tax that was paid through the purchase of ordinary postage stamps in the proper denomination.

Military stamps are used by active service personnel under a variety of circumstances, usually as part of a fighting force in war time or as part of an occupation force. Such stamps may also be used by peacekeeping forces serving abroad. The Ottoman Empire issued the first military stamps in 1898 for use by its forces occupying Thessaly.

Scott lists semipostal stamps with a "B" prefix. These stamps carry with them a surcharge over and above the fees collected for postal services. The surcharge thus collected is given to a charity. The United States issued its first semipostal, the nondenominated Breast Cancer Research stamp in 1998. Recently the Postal Service announced plans to issue two more semipostals.

Most countries in the world have offered reduced postage rates for newspapers and other specific types of printed matter. Some countries issued postage stamps for use on this particular class of mail. Scott catalogs list newspaper stamps with a "P" prefix. A New Zealand ½-penny bright rose Queen Victoria newspaper stamp, Scott P4 is shown in Figure 7.

Postal-fiscal stamps can be used to indicate payment for a broad category of services. They are prefixed "AR" in the Scott catalogs. They often straddle the line between postage and revenue stamps. Postage stamps pay for postal services, while fiscal stamps pay for fees and taxes for other kinds of governmental services such as deed or stock transfers, taxes on imported goods and licensing and inspection fees.

Revenue stamp collectors may collect fiscally used postal-fiscal stamps in their own right without regard to postal usage. Revenue stamps are stamps with no postal function used to indicate payment of a wide variety of taxes. Representative revenue stamps from the United States, Western Australia, New South Wales and South Australia are shown in Figure 9.

Many other kinds of stamps serve special purposes: postage dues, occupation issues and postal taxes. Some can be found in general catalogs. Others are not cataloged or appear only in very specialized catalogs. All can be fun to collect.