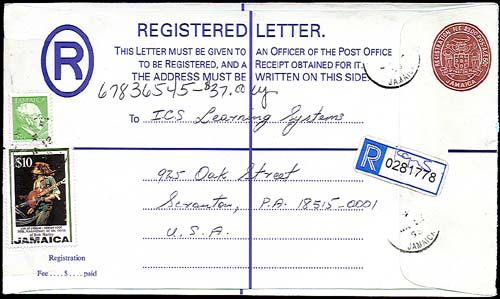 Figure 7. A $3 registered mail cover sent from Jamaica to Scranton, Pa., up-rated by the addition of $30.30 in stamps. Click on image to enlarge. 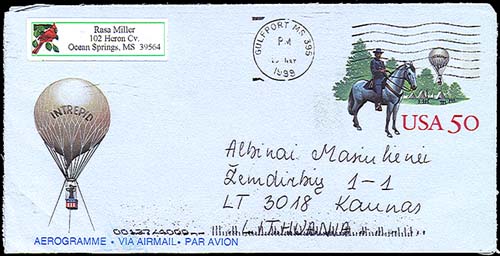 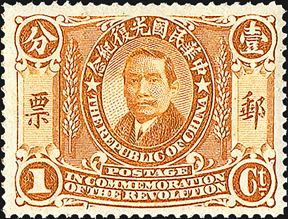 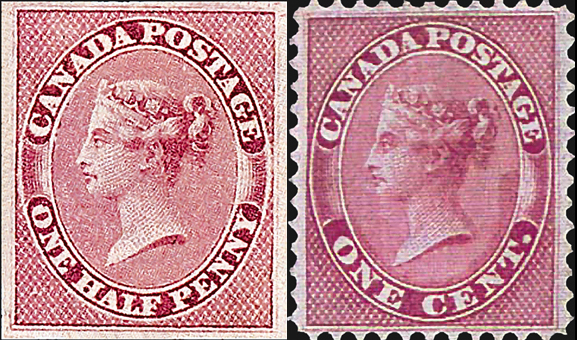 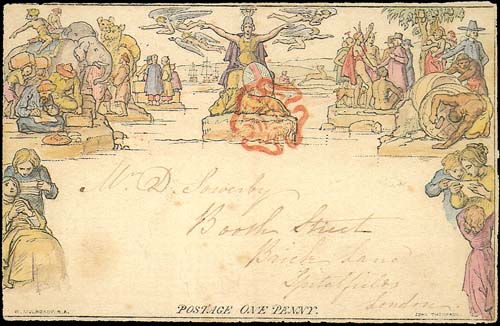 Figure 1. A handcolored 1d Mulready envelope, Scott U1. Click on image to enlarge.
Previous
Next

The standard work for worldwide postal stationery has been the Higgins and Gage World Postal Stationery Catalog. Its listings, however, end in 1976. Most values were updated by supplements, but the most recent one is from 1990 for the "I" countries. Michel issues an excellent two-volume German-language catalog of European postal stationery. Many specialized single country or area catalogs also list postal stationery.

The Mulready envelopes and letter sheets of Great Britain, so called because they were designed by William Mulready, had their first day of sale on May 1, 1840, and official first day of use on May 6, the same as the famous 1-penny black Queen Victoria stamp. The Mulready envelope is the first example of one of the most frequently encountered types of postal stationery.

Stamped envelopes are usually sold for a small premium above face value to include the cost of the envelope. The Mulready envelopes were issued in 1d and 2d values with an elaborate allegorical design of which a great deal of fun has been made. The elaborate design combines the functions of stamp and cachet in one, with the value indicated at the bottom front of the envelope.

A handcolored 1d Mulready envelope with red Maltese cross cancel, Scott U1, is shown in Figure 1. The design includes Britannia, four winged messengers (one of whom has only one leg), the British lion, a shield with Union Jack, three ships, a sledded Laplander and reindeer, William Penn with American Indians, a tropical planter, Turks, Chinese, Indians, Africans, people receiving good news, people receiving bad news, a dog, elephants and camels.

The Mulready stationery was not popular. Dozens of bitingly funny caricatures of its baroque design appeared. For an informative and amusing study of the subject, see The Mulready Envelope and Its Caricatures by Major E.B. Evans.

The elaborate design, either beautiful or grotesquely overblown depending on aesthetic tastes, got most of the blame for the Mulready's unpopularity, but the simple truth is that postage stamps were more convenient and economical to use. Stamps continue to vastly outsell postal stationery to this day.

In the United States, older U.S. stamped envelopes are sometimes collected today as cut squares. That was the fashion in collecting them about 100 years ago, and some imprints today are available only as cut squares.

A cut square is a neatly trimmed rectangular (not necessarily square) section from a stamped envelope that includes the imprinted postage stamp design with ample margin. Used cut squares ideally should be large enough to include the postmark. A 15¢ on 13¢ orange-brown Liberty Tree cut square, U.S. Scott U588, with a Hicksville, N.Y., May 29, 1979, machine cancel is shown in Figure 3.

The "U.S. REVALUED TO 15¢" surcharge to the left of the stamp design of the cut square shown in Figure 3 also makes this piece an example of revalued postal stationery. Postal stationery may be revalued by surcharge when postal rates change. It may also be up-rated by the addition of postage stamps to pay for additional weight or services not covered by the postal stationery's imprinted value.

A variation of the Seabee motto ("We Build, We Fight") appears as "Fighting Builders" between the killer bars of the Feb. 26, 1944, U.S. Navy postmark. The return address shows it to have been mailed from a seaman assigned to Headquarters Company of Naval Mobile Construction Battalion 66. The red, white and blue border of the cover is a common feature on many airmail stamped envelopes.

The Mulready letter sheets that debuted in May 1840 were the first exemplars of letter-sheet postal stationery. Letter sheets are envelopes that have not been folded and glued together. They are sold flat and open.

The message is written on the plain inside of the sheet as well as the back of the bottom flap. After writing, the sheet is folded up and sealed for mailing. No additional sheets of paper or other material are permitted to be placed inside or attached to the letter sheet.

The most frequently encountered type of letter sheet is the aerogram. Letter sheets lend themselves to airmail usage because they are lightweight. A 50¢ Thaddeus Lowe aerogram, Scott UC64, mailed May 29, 1999, from Gulfport, Miss., to Kaunas, Lithuania, is shown in Figure 5.

Because large U.S. government agencies that generate the bulk of government mail were usually furnished Official mail-metering equipment, most modern Official mail postal stationery usage was by smaller activities, such as U.S. Navy ships. A 25¢ black and blue Great Seal Official mail envelope, U.S. Scott UO77, mailed from the USS John Hancock (DD-981) to the USS Orion (AS-18) on Sept. 14, 1989, is shown in Figure 6. Catalog values for modern used U.S. Official mail postal stationery are much higher than for mint due to their scarcity in the mailstream.

A Jamaican $3 Coat of Arms registered mail envelope mailed Jan. 12, 1998, from St. Catherine, Jamaica, to Scranton, Pa., is shown in Figure 7. The cover was up-rated by the addition of a $10 Bob Marley Live at the Lyceum stamp, Scott 840, and a 30¢ emerald Sir Alexander Bustamante definitive stamp, Scott 646, on the front and two $10 stamps on the back of the cover (not shown).

A future Refresher Course will discuss additional types of postal stationery not covered in this installment.