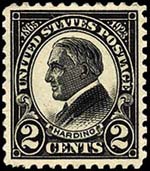 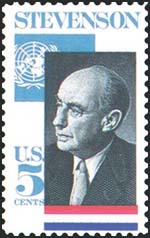 Figure 3. The 1965 Adlai Stevenson stamp was printed with intaglio and lithography.

Figure 2. This United States 1¢ New Netherland stamp is an intaglio stamp printed with a flat plate.

Figure 1. The Bureau of Engraving and Printing headquarters in Washington, D.C., is traditionally recognized as the home of United States stamp production, but most U.S. stamps have been printed elsewhere since the mid-1990s.
Previous
Next

The Bureau of Engraving and Printing is the traditionally recognized home of United States stamp production. The Bureau facility in Washington, D.C., is shown in Figure 1. Since the mid-1990s, the Bureau has printed mostly long runs of just a few regular-issue stamps rather than many different stamps.

Today's stamps are printed using a variety of printers, methods, inks and papers. Some varieties are apparent by simply looking, while others require closer inspection to determine the variations.

Intaglio is an Italian word meaning "incised" or "engraved." Intaglio is a form of printing in which the inked image for a stamp is produced by the portion of the plate that is below the surface. Intaglio printing leaves the printed ink raised slightly above the surface of the paper. The ink texture can often be seen and felt with a fingertip. Not many intaglio stamps are printed today, but those that are usually use only one or two inks.

In intaglio (line engraving), the image is hand-engraved as lines on a die and is transferred to a plate. Figure 2 shows the 1¢ New Netherland stamp in the Huguenot-Walloon Tercentenary issue, Scott 614. This stamp was printed using the intaglio method.

Gravure is another form of recess printing. Gravure is a multicolor printing process that uses printing cylinders (solid cylindrical printing bases, one for each ink) that have the design below the surface. Today's cylinders are prepared by a computer that drives a diamond stylus that etches the cells that hold the ink. Decades ago this was done by photographic and chemical means, thus the old term photogravure.

In gravure, the ink rests in the design cells (tiny shallow wells) on the printing cylinder, and the surface of the cylinder is wiped clean. The press forces the paper into the depressions, and the ink adheres to the paper, as with line-engraving, but the impression is thin and cannot be felt with a finger.

The 5¢ Adlai Stevenson stamp of 1965, Scott 1275, is shown in Figure 3. It was printed using a combination of intaglio and offset lithography. Offset lithography uses a flat printing base and water. The design area of the flexible metal plate (one for each ink) is sensitized to hold the ink, but not the moisture, while the area not to be printed remains moist and repels the ink. The process is based on the principle that water and oil do not mix.

Some 19th-century stamps were printed using traditional stone lithography, which used flat stones instead of metal.

Letterpress printing is relief printing, or the opposite of recess printing. Rather than the ink being held in a recessed design in the plate, only the raised part of the plate is inked. This is how an ordinary rubber handstamp works. Letterpress stamps were most often printed in one color.

The plate is the basic printing unit on a press. Early stamps were usually printed from flat plates, as was the Figure 2 stamp. Curved or cylindrical plates on rotary presses are used for most modern stamps.

During the transition between the use of flat plates and curved plates, some definitive stamps were printed using both methods. Often the difference between these can be determined only by careful measurement. Those printed on a cylindrical (rotary) press may be slightly taller as a result of the curvature of the plate.

For example, some of the U.S. stamps issued as a tribute to Warren G. Harding, issued a month after his death in 1923, were printed using a flat press (Scott 610), while others were printed on a rotary press (612). The flat-press-printed stamps are about ¼ millimeter shorter than the rotary-press stamps. The rotary-press printings of the Harding stamps, in some cases, are thousands of times more valuable than the flat-press printings.

Different varieties of paper are used in stamp production. In general, there are two broad categories of stamp paper: wove and laid. Wove paper (today's paper) is fairly smooth and even. Laid paper is textured with lines of varying thickness.

Batonne paper is a type of paper in which the lines are spaced far apart. It may be either wove or laid, and if laid, the laid lines can be seen between the widely spaced lines. Quadrille paper has lines that form small squares. If the lines form rectangles, the paper is known as oblong quadrille.

Granite paper can be recognized by the minute bits of cloth or colored paper fibers within it. This is not to be confused with so-called silk paper, which has bits of colored silk threads scattered throughout to prevent counterfeiting.

Chalky paper was another type used to prevent fraud. This is coated with a chalky substance to prevent reuse of a stamp. Stamps printed on chalky paper should not be soaked off paper because the design will deteriorate.

Double paper was also used briefly in U.S. stamp production to prevent the reuse of stamps. This consisted of a thin and a thick layer of paper joined together in the production process. The design of the stamp was printed on the thin layer, and any attempt to clean a cancel from the stamp would destroy the design.

The term double paper is also used to describe the point at which the end of a paper web (press roll) is attached to the beginning of another on a rotary press. The stamps printed on the overlapping portion are not meant to be released but have occasionally been missed by inspectors.

Modern stamps usually have some form of luminescence. This may be visible to the eye with the help of shortwave or longwave ultraviolet light. For some stamps, the paper itself is luminescent, but for most, tagging is applied.

Tagged stamps may have luminescent shapes, patterns, blocks, stripes or overall coatings on them. Tagging triggers the automatic equipment used in modern mail processing. It also acts as a security device to deter counterfeiting. The presence or absence of tagging on some stamps can significantly affect their market value.

Watermarks are a part of some paper, created by using pieces of metal to impress a design into the paper during its manufacture. Many interesting and valuable varieties of early U.S. stamps can only be determined by checking for watermarks in the paper.

A watermark can sometimes be seen by holding a stamp up to a light. Other watermarks can be detected using watermark fluid. It makes the design of the watermark appear more prominent temporarily when the stamp is placed in a black tray.

Some valuable stamps may be distinguished from common stamps by measuring their perforations with a special gauge. Perforating is a means of separating stamps. The perforations are small uniform holes created by perforating pins, which remove a small part of the paper. Stamps that are not separated at all, and must be cut apart, are called imperforate.

In rouletting none of the paper is removed. Instead it is cut through partially or completely. The roulettes may be cut in straight lines, as is most common, or in patterns such as small triangles or half-circles.

The rotary-press, gauge 10 Harding stamps are valued in mint, never-hinged condition at approximately 28 times as high as the common version. The most valuable Harding stamp is the rotary-press, gauge 11 stamp, worth many thousands of dollars. As this example shows, seemingly minor production variations in stamps that appear to be virtually identical can have enormous impact on their market value.

The third major form of stamp separation is die cutting. Die-cut stamps almost always are completely separated from each other. U.S. die-cut stamps are usually separated by serpentine cuts. Other countries' stamps often use straight cuts, or they take advantage of the flexibility offered by die cutting and use various shapes or patterned edges.

Figure 6 shows a good example of a die-cut stamp in an unusual shape. The Canadian 47¢ stamp issued for the 25th anniversary of the Toronto Blue Jays in 2000 has a custom outline unmatched by any other stamp in the world. Stamps also have been die cut into the shapes of bananas, liquor bottles, balloons and many other shapes.

Die-cut stamps use pressure-sensitive adhesive, and they are backed with slick liner paper to maintain the integrity of the unit — the stamp pane or booklet. Most other stamps use a moisture-activated adhesive. This stamp gum may be categorized as shiny, dull, smooth, rough, dark, white or tinted.

Modern trends in stamp production are leading away from the use of moisture-activated (lick-and-stick) gum to the more convenient pressure sensitive, or self-stick, issues. While self-stick stamps are popular with mailers, collectors have mixed reactions.

However, major changes in production methods always elicit mixed reactions from stamp collectors, and the trend toward pressure-sensitive adhesive on stamps is no different. The trend away from engraved stamps to offset lithography and gravure drew some very strong reactions from collectors too, but progress, or that which is perceived as progress, cannot be stopped in stamp production anymore than it can elsewhere.