How well do you know stamp perforations? 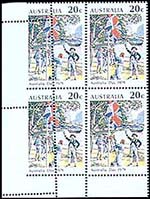 This block-of-six Australian 5d Queen Elizabeth II stamps, Scott 365b, is missing the middle vertical perforations and the bottom horizontal ones.

Harrow perforations result when entire sheets are perforated in a single operation, such as on this World Stamp Expo 89 show sheet issued by Tonga-Niuafo'ou, Scott 122. 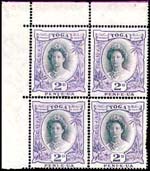 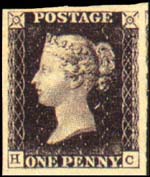 The world's first postage stamps, the black 1-penny and blue 2d stamps issued by Great Britain in May 1840, Scott 1 and 2, were printed in separate sheets of 240. Individual stamps had to be cut from a sheet with scissors.

Most examples do not have full margins on all four sides, and a perfectly centered four-margin Penny Black, such as the one shown in Figure 1, commands a premium.The process was slow and imprecise. Careless scissor wielding damaged the stamps.

Postage stamps were a good idea, even a great idea, and they still are.

The prototype postage stamp described by its inventor Rowland Hill in 1837 as "a bit of paper just large enough to bear the stamp, and covered at the back with a glutinous wash" pretty much describes the product still in use 165 years later. However, there was room for improvement.

One of the first improvements was more efficient separation of stamps.

Henry Archer, an Irish businessman working in London, invented a device that cut tiny slits called "roulettes" into the margins between the stamps.

Archer had the machinery built and made some unsuccessful trials of the roulette separations.

A later adaptation of the concept punched rows of tiny round holes — perforations — between the stamp designs.

The different methods of making perforations are of interest to stamp collectors, and they can greatly affect the value of the stamps.

Some perforation methods, such as those introduced in the United States by Schermack and Mailometer companies, were developed for dispensing stamps from coils in automated vending machines.

Stamps with line perforations are those that have had their perforations made in a straight line, one or more rows of stamps at a time.

For example, a sheet of stamps would have all the horizontal perforations applied and then be turned and have the vertical perforations done, one or more rows at a time.

Stamps with line perforations often have holes that overlap one another where they intersect, thus giving the stamp corners an uneven appearance. A line-perforated block-of-four 2d Queen Salote stamps, Tonga Scott 55, showing perforation holes overlapping at the stamp corners, is pictured in Figure 3.

Stamps with comb perforations have at least three sides perforated at one time. Some comb machines completely perforate two or three rows and one row on three sides.

Then the sheet is advanced through the machine and the next row or rows have their perforations applied until the sheet is completely perforated.

Sheets or panes of stamps that have been entirely perforated in a single operation are harrow perforated, such as on the World Stamp Expo 89 sheet issued by Tonga-Niuafo'ou, Scott 122, shown in Figure 5.

Self-adhesive stamps that have wavy edges resembling perforations are actually die cut and not perforated.

Figure 6 illustrates a block of six Australian 5d Queen Elizabeth II stamps, Scott 365b, that has no middle vertical row of perforations and no bottom horizontal row.

In this instance, the missing perforations are not an error, but a deliberate issue. The intent was that the stamps would be cut along the rows having no perforations to make them into stamp booklet panes.

Uncut sheets of these stamps were sold to collectors by the Australian post office.

Such stamps are collected as imperforate-between pairs or blocks.

Stamps can be misperforated, such as the block-of-four 20¢ Australia Day stamps shown in Figure 7, double-perforated, or not perforated at all.

Blind perforations are slight indentations made by perforating pins, but there's no hole and no paper is missing.

Punched-out perforation holes are called "chad," a word prominent in the 2000 presidential election.

The perforations on stamps can be measured, and the measurement of the perforations can be a deciding factor in determining a rare stamp from an otherwise identical-looking common stamp.

Perforation gauges measure the number of holes or teeth per two centimeters. A stamp that measures "perf 11" is one that would have 11 teeth or 11 holes within the confines of two centimeters, if the stamp is that long. The gauge works for any stamp, no matter how large or small it is.

Some stamps have perforations that gauge differently on all four sides. Bosnia and Herzegovina's pictorial definitives of 1906 are notorious for their multiple compound perforations. For collectors who like measuring perforations, this is a good area for specialization.

Acquiring a good perforation gauge is the key to quick, accurate perforation measurements.

Linn's Multi-gauge, shown in Figure 8, is an excellent and affordable choice. Other perforation gauges work on the same principle.

To measure horizontal perforations or die cuts, place the stamp's top edge along the top of the grid work and slowly slide the stamp down along the grid until all the teeth of the perforations match up perfectly with the gauge's vertical lines.

When the perforations align with the vertical lines, read the corresponding number to the left or right of the stamp on the gauge. This is the measurement of the horizontal perforations.

To find the measurement of the vertical perforations or die cuts, turn the stamp on its side and repeat the process.

The Multi-gauge reveals that the stamp being measured in Figure 8 is a perf 14 perforation variety, Croatia Scott C1a.

Another feature of Linn's Multi-gauge, the zero-center ruler, is of great assistance in centering covers and other large items on blank pages.

The Multi-gauge also offers a ruler and a circular cancellation gauge that is useful in measuring the size of cancels. Place the gauge over the cancel to be measured and adjust the centering until one of the rings matches the outer circle of the cancel. It's a handy and affordable gadget.

Catalogs are a great help in reducing the time and effort it takes to measure perforations. In most cases, a quick consultation with a catalog will give the known perforations or ranges of perforations for a particular stamp.

It is then up to the collector to measure a stamp to find out which variety it is.

Use care when purchasing expensive stamps whose value is dependent on its perforation measurement.

Stamps can be reperforated. Sometimes straightedged or badly centered stamps are reperforated to increase their apparent value.

When a significant amount of money is involved, it is best to have a stamp checked by an expertization service.