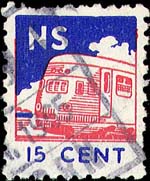 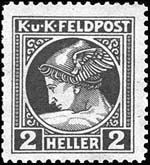 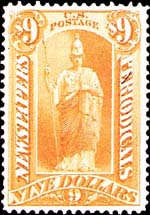 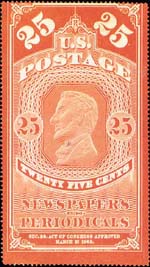 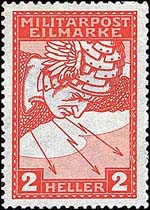 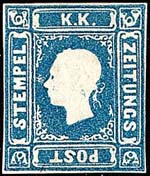 Broadly speaking, there are two types of stamps issued for special classes of mail: newspaper stamps and parcel post stamps.

Because of the relative weight of newspapers, the cost of mailing them at the letter rate would have been prohibitive, so postal services provided a discounted rate just for newspapers with less attentive handling than letter-class mail.The need for stamps for a special class of mail arose when some postal services created a separate rate for the delivery of newspapers.

In the Scott Standard Postage Stamp Catalogue, most newspaper stamps are prefixed with the letter "P." More than 40 countries have issued newspaper stamps. Portugal and its colonies account for 16 of them.

The world's first newspaper stamps were issued by Austria in 1851. Austrian newspaper stamps served the dual purpose of indicating prepayment of postage and signalling postal clerks to process the other mail first.

Inscribed "K K POST" and "ZEITUNGS STAMPEL" (newspaper stamp) and showing a profile of helmeted Mercury, the first Austrian newspaper stamps were nondenominated and did not bear the name of the country.

The "K K POST" stands for "Kaiserliche und Koenigliche (imperial and royal) Post," a frequent inscription on stamps of the Austrian part of the Austro-Hungarian Empire.

Mercury, messenger of the gods, appeared on all but four Austrian newspaper stamps. One of the exceptions, the nondenominated (1-kroner) blue Emperor Franz Josef II newspaper stamp, Scott P5, is shown in Figure 1.

Austrian newspaper stamps exist in denominations for delivery of individual newspapers as well as higher ones for bulk newspaper shipments.

Catalog values for used newspaper stamps are sometimes equal to or greater than those for mint stamps. This is because the wrappers that bound the papers to which the stamps were affixed usually went directly into the dustbin upon receipt, so relatively fewer of them survived.

The first United States newspaper stamps were issued in 1865 for prepayment of bulk shipments of newspapers and periodicals.

U.S. newspaper and periodical stamps were not sold to the public. They were attached by the newspaper publisher to a shipping document that accompanied the papers to the post office.

After 1875, the stamps were affixed to the pages of receipt books normally retained by the post office.

An anomaly of the Scott catalogs is that U.S. newspaper stamps are prefixed "PR," while for other countries "PR" indicates newspaper tax stamps.

Austria issued occupation newspaper stamps, prefixed "NP" in the Scott catalogs, for the parts of Italy it occupied in 1918.

Newspaper tax stamps are actually revenue stamps that do not pay for postal service. However, because they were required to be affixed for postal delivery of newspapers, some of them are listed in the Scott catalogs prefixed with the letters "PR."

Some countries imposed the tax only on foreign papers. Others taxed all newspapers. Newspaper tax stamps were issued by Austria, Lombardy-Venetia, Modena, Tuscany, Parma and Hungary.

Railway newspaper stamps were issued by Latvia during 1926-38.

Issued to pay railway freight and some postal charges for parcels of newspapers, these stamps bridge the gaps between newspaper, parcel post and railway stamps.

Belgian parcel post and railway stamps are listed together chronologically in the Scott catalog, all prefixed with the letter "Q."

Belgian railway stamps issued since 1951 lack the inscription, but they always feature an element relating to railways in their design (trains, stations, rails or railway personnel).

When these stamps are used on parcels carried domestically on Belgian railways, the handling is exclusively by railway employees. Catalog values for used stamps are for railway cancellations.

Belgian railway stamps are also valid for payment of some types of parcel post. Stamps bearing a postal cancellation sell for twice as much as those bearing a railway cancel.

Belgian parcel post stamps, first issued in 1928, are inscribed in French and Flemish "Colis Postal — Post Collo" or "Collis Postaux — Post Colli." They are normally found with postal cancellations, and the premium for postal use does not apply to these stamps.

The United States began issuing parcel post stamps in 1912 as an accounting tool to see if its new parcel service was profitable.

On June 26, 1913, after it was determined that the service was self-supporting, the requirement to use parcel post stamps for payment of parcel postage was discontinued.

Chile is the only country to have issued a parcel post postal tax stamp.

Authorized-delivery parcel post stamps are actually revenue stamps with a postal connection. In countries where the postal service had a monopoly on parcel deliveries, private delivery services had to pay a tax in order to deliver a parcel.

Only Italy and Trieste Zone A issued parcel post authorized-delivery stamps, prefixed "QY" in the Scott catalog. Most Italian stamps in this category are diptyches.

In the United States, authorized delivery fees were equivalent to the full postal rate, and payment of the fee was attested by the use of regular postage stamps.

Special handling was a class of mail for parcel post that provided for handling of parcels equivalent to first-class matter. Austria, Bosnia and Herzegovina, and the United States issued special handling stamps. They are prefixed "QE" in the Scott catalog.