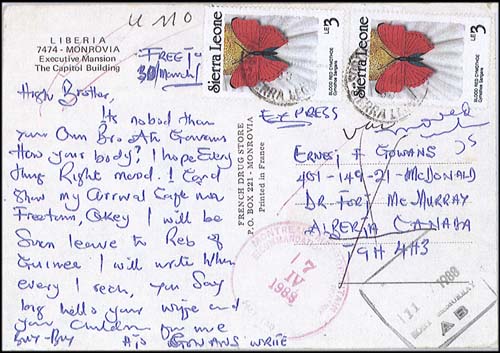 This Liberian postcard, mailed in 1988 from Sierra Leone to Alberta, was forwarded to Montreal. 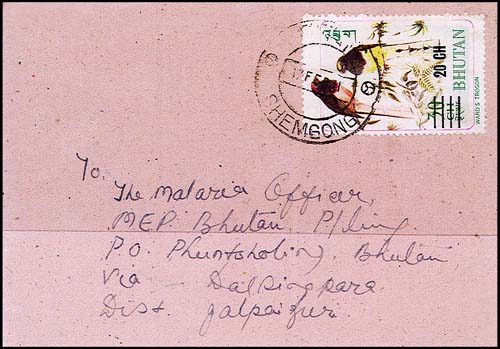 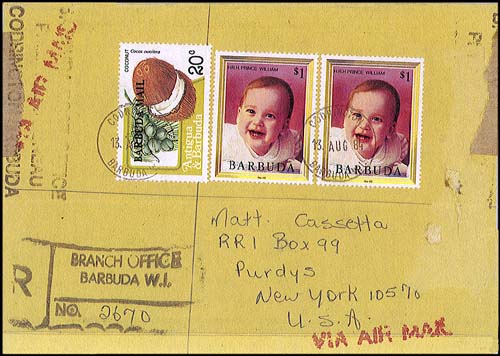 A registered cover sent from the Philatelic Bureau in Codrington, Barbuda, to Purdys, N.Y. 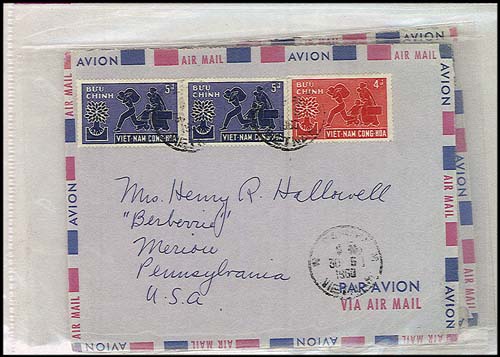 A cover sent from Saigon, Vietnam, to Meriou, Pa., inside the pocket of a clear plastic cover page. 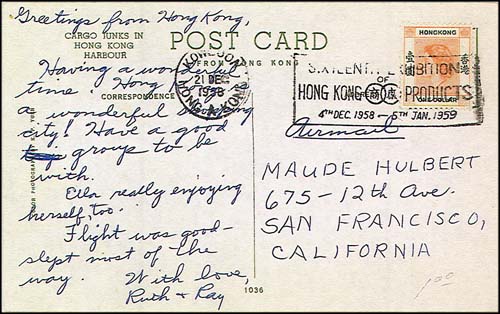 A picture postcard mailed from Kowloon, Hong Kong, to California. The message side is rather plain. 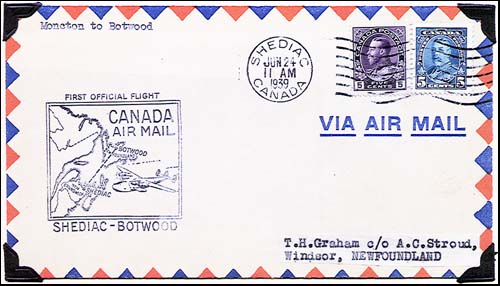 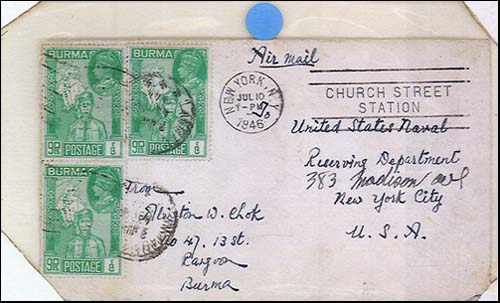 A 1946 Burmese airmail cover mounted on a file folder page and attached to the page by inserting the corners of the cover through the diagonal slits cut in the page.
Previous
Next

If you are looking around for a new collecting area to explore, consider starting a one-cover collection of every country in the world.

You will certainly have a few postcards and covers from the United States. Probably you own some Canadian items. You may own a Great Britain cover or two as well.Getting started will be easy. Some covers and used postcards from the western world are cheap and abundant. You probably have some of these already in a shoebox in your closet.

If you are lucky enough not to have soaked the Hong Kong stamp off Aunt Ruth's postcard from the cruise she took there last year, then you have your first Asian item.

Instead of clipping and soaking the stamps, sort the covers by country. After sorting, you can put them back in that shoebox alphabetically.

The next step is to make a cover album from any empty loose-leaf binder. Cards and covers can be crudely but simply mounted on sturdy sheets of stiff paper such as ordinary file folders, by cutting the folders in half and making slits with a box cutter for the four corners of the cover or postcard you wish to mount.

A 1946 Burmese airmail cover mounted on a file folder page and attached to the page by inserting the corners of the cover through the diagonal slits is shown in Figure 1.

The town name in the postmark on this cover is illegible, but the sender's return address is in Rangoon.

The front of the cover bears three 9-paisa peacock-green Burmese Man stamps, Scott 66. Not shown on the back are 11 3-anna Elephant Moving Teak Log stamps, Scott 58.

Burmese covers are not as likely to be lying about underfoot as those from North America or Western Europe, but they are still easily attainable.

Some collectors prefer to use standard black photo corner mounts to position their cards and covers on the pages. Using either mounting method, your beginner's collection can then be arranged alphabetically in any loose-leaf binder.

The cover was mailed June 24, 1939, from Shediac, New Brunswick, to Botwood, Newfoundland.

Whenever you acquire a cover from a different country, construct a new page and insert this sheet in alphabetical order in your album.

Simple homemade mounting is a cheap and handy way to get started with a small beginner collection.

Unfortunately, both of these mounting methods might cause damage to your covers over time, and neither is recommended for prolonged storage.

Another drawback of these simple mounting methods is that the back of the cover cannot be seen without removing the cover from the mount.

Being able to see both sides of a postcard or cover can be crucial, as in the Burmese cover, which bears most of its franking on the back.

Another example, is the postcard mailed from Kowloon, Hong Kong, to San Francisco, Dec. 21, 1958, shown in Figure 3.

The message side is plain; however, the Hong Kong harbor view on the reverse (not shown) is stunning. Clearly it would be better if both sides of this postcard were viewable upon flipping the page over.

When you are ready to house your cover collection on more protective and permanent pages, there are commercially available attractive and affordable clear plastic pages with pockets that allow the viewing of both sides of your covers and postcards.

A cover sent May 30, 1960, from Saigon, Vietnam, to Meriou, Pa., is shown inside the pocket of a clear plastic cover page in Figure 4. The cover bears two 5-piaster and one 4p World Refugee Year stamps, Scott 135 and 134, respectively.

Two covers with unremarkable backs can be placed back to back in these cover pages to conserve album space.

You may also protect your better covers with commercially produced clear plastic cover protectors, which allow for safe handling when you move your covers around or show them to friends.

In forming a one-cover world collection, a question that must be answered is, how many countries are there from which to collect covers? The Scott catalog's Index and Identifier lists 536 former and modern stamp issuing entities. According to the magazine Michel Rundschau, 269 of them still actively issue stamps.

Covers from some countries, colonies or areas that no longer issue stamps, such as Annam, Heligoland and Tahiti, can be quite expensive. Covers from other recently dead countries, such as the Soviet Union and Transkei, are less costly.

Shown in Figure 5 is a registered cover sent Aug. 13, 1984, from the Philatelic Bureau in Codrington, Barbuda, to Purdys, N.Y..

Barbuda, an island in the West Indies with a population of about 1,500, is a dependency of Antigua. It is notorious for issuing hundreds of topical stamps far beyond the postal needs of the population.

This cover is not a pristine beauty. Nevertheless, I prize it for the large commemorative stamps it bears that are almost never found postally used.

They may not be as pretty, but I prefer commercial covers to those that have been philatelically contrived.

Your local stamp club is a good place to look for covers for your collection. Many of your fellow collectors may have a fistful of assorted covers they are willing to dispose of for a pittance.

Stamp shows are also fertile ground for expanding your collection. Dealers often have long trays of commercial covers or postcards that patient customers may search through for new countries. Common covers often sell for $1.

Another prized cover from my collection from the Himalayan Mountain kingdom of Bhutan is shown in Figure 6. The cover is postmarked Shemgong, Feb. 17, 1971, and is addressed to the Malaria Officer of Jalpaigur District.

Remoteness is not the only reason for the scarcity of covers from some nations.

Afghanistan, Liberia, Somalia and Sierra Leone have been wracked by civil wars. There are few functioning post offices. With people being gunned down in the streets, commerce comes to a halt. Most people lack the means or motivation to write letters.

Shown in Figure 7 is a Liberian postcard, mailed in 1988, from Sierra Leone to Canada. It went to Fort McMurray, Alberta, then to Montreal, Quebec, searching for the addressee.

An eye-pleasing world cover collection can be put together with little expense. It might never be particularly valuable, but if you are looking for an investment, try the stock market. For challenging fun, it's hard to beat a one-cover-from-every-country collection.