Naval covers can make or add to collection 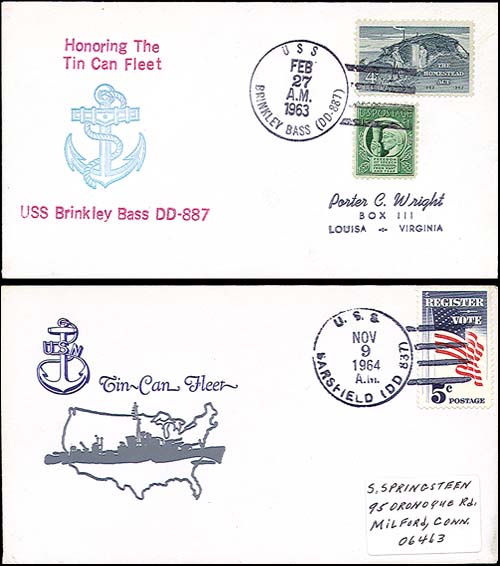 These two destroyer covers, canceled aboard the USS Brinkley Bass in 1963 (top) and the USS Sarsfield (bottom) in 1964, feature "Tin Can Fleet" cachets. 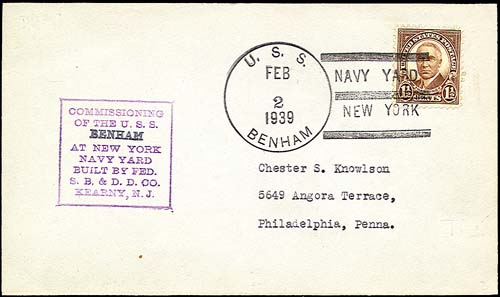 This cover commemorates the commissioning of the USS Benham Feb. 2, 1939, at the New York Navy Yard. 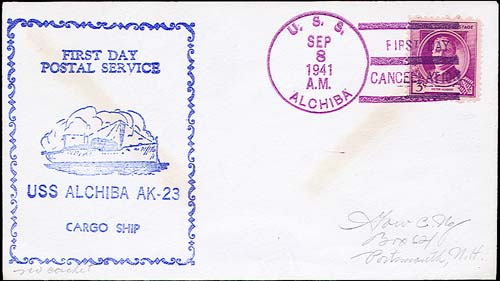 The USS Alchiba, commissioned in June 1941, did not begin onboard postal services until September. This cover's cancel notes this with the words "First Day Cancellation." 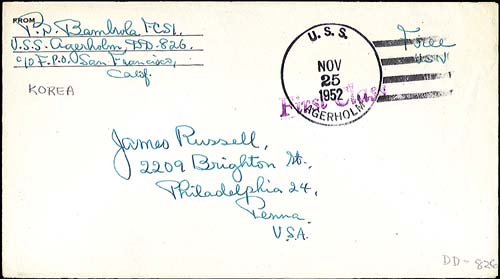 This cover carried a letter from a sailor aboard the USS Agerholm during its second tour in the Korean War. 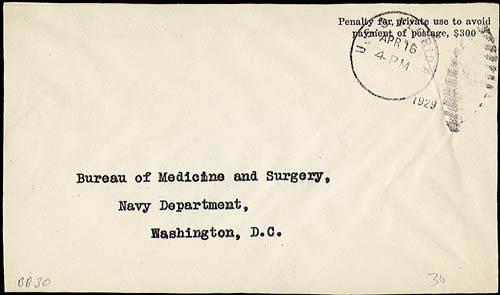 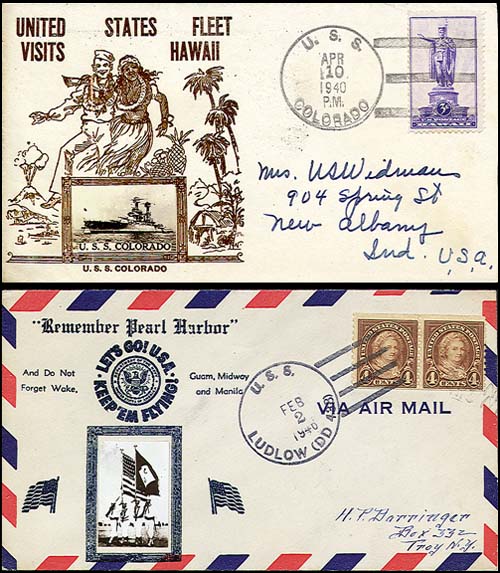 United States naval covers are envelopes (or cards) that have been postmarked or mailed from a U.S. Navy ship. Originally, naval covers were only letters or postcards from sailors with the postmark of the ship's post office.

Cachets (added designs) found on naval covers may be specific to a ship or an event, or they may be more generic in nature. Today, U.S. naval covers are usually considered to be any envelope, postcard or similar item that is mailed from or otherwise related to a Navy ship, location or event.Post offices first opened on ships of the Great White Fleet in 1908. The United States Battle Fleet was on a mission to circumnavigate the globe as part of President Theodore Roosevelt's so-called Big Stick diplomacy. By the 1930s or so, collectors began sending their own covers to ships to be canceled. About the same time, ship cachets became very popular.

Although some early postmarks may be difficult to find, many naval covers are modestly priced. Extensive collections can be formed with a relatively small amount of money. There are as many ways to collect U.S. naval covers as there are ships in the history of the U.S. Navy. Your chosen collecting range may be as broad or as narrow as you like.

I will offer here just a few examples of how to collect naval covers, and with a little imagination, you will see that the possibilities are endless. Naval covers can make a wonderful collection on their own, or they can add to an existing collection.

For the artistically minded, a popular way to collect naval covers is by cachetmaker. Possibly the most well-known cachetmaker in U.S. naval covers is Walter G. Crosby. Crosby had been an established collector since the late 1920s. He was best known at the time as a dealer in naval postmarks.

He introduced a distinctive cachet style at the California Pacific International Exposition in 1935 that quickly became his trademark. It incorporated a small black-and-white photograph set into a thermographic print. The style quickly became famous among collectors of naval covers, as well as first-day cover collectors.

Figure 1 shows two Crosby covers. The one at the top, postmarked April 10, 1940, carried a letter from a sailor on the battleship USS Colorado. The airmail cover in Figure 1, bottom, was canceled aboard the destroyer USS Ludlow Feb. 2, 1946. Both of the Figure 1 covers are also suitable for airmail or aviation topical collections. TheColorado participated in the search for Amelia Earhart and co-pilot Fred Noonan when their plane went down in July 1937.

If your motivation for collecting stems from a military tour of duty, you might collect covers from a specific ship, perhaps even within a specific time frame. Postal historians often collect naval covers only as actual mail from sailors aboard ship.

The stampless cover shown in Figure 2 was posted to the Bureau of Medicine and Surgery of the Navy Department in Washington, D.C. The cover was canceled aboard the battleship USS Florida April 16, 1929.

Military historians can appreciate the cover shown in Figure 3. It was mailed Nov. 25, 1952, by a sailor on the USS Agerholm while the ship was on its second tour of duty in Korea. The Agerholm was first commissioned June 20, 1946, and it was finally decommissioned Dec. 1, 1978.

Naval covers can be an excellent starting point for the budding postal historian because precise records are kept of ship movements, activities and personnel, making research of ship mail much easier than research for mail from other origins.

Collectors have long had a fascination with first days. A naval collection can comprise covers postmarked the day the ship was commissioned or the ship's first day in postal service. The cover pictured in Figure 4 bears a cachet for the cargo ship USS Alchiba's first day of postal service, Sept. 8, 1941. The killer bars in this postmark include the words "First Day Cancellation."

A naval cover collection can be based on a particular type of ship, such as destroyers, or even more specific by class or a cover decoration. Figure 6 shows two destroyer covers bearing "Tin Can Fleet" cachets. Destroyers came to be called tin cans by their crews during World Wars I and II. The sailors claimed that the hull plating was so thin that it must be made of tin cans.

Another fun way to collect naval covers is to work backward, starting at a dealer's junk box or on the Internet. Find covers that appeal for whatever reason — attractive cachet, clear cancel, odd somehow or just cheap — then look into the history of the ship, specifically at the time the cover was postmarked. Often, the genuine postal history items — ugly and undecorated real mail from sailors — can be bought for next to nothing.

Some pieces that fail to be aesthetically pleasing might be found to have fascinating historical value. An excellent source for ship histories can be found online at www.navy.mil. The site also includes many links to additional information.