Surcharges and overprints make a difference 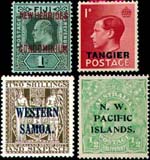 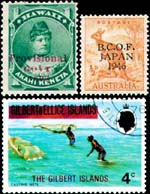 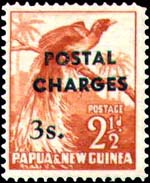 A Papua New Guinea 2½d Bird of Paradise definitive stamp surcharged 3/– and overprinted as a postage due stamp, Scott J5. 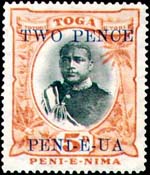 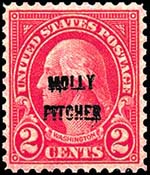 Overprints can turn a definitive stamp into a commemorative stamp: a U.S. 2¢ carmine Battle of Monmouth stamp, Scott 646.

Surcharges can raise values: New Zealand 4¢-on-2½¢ Magpie Moth stamps, Scott 480 and 480a.
Previous
Next

The words surcharge and overprint are often used interchangeably by stamp collectors and dealers. In reality, all surcharges are overprints, but not all overprints are surcharges.

Surcharges are specifically related to the face value of a stamp. For example, if there is a postal rate increase, some countries choose to revalue a stamp of a different denomination by printing a new value on the top of, or adjacent to, the old value.

The stamps illustrated in Figure 1 are examples of surcharges made to provide the correct value for a postal rate increase in New Zealand in 1971. The domestic letter rate changed to 4¢, so 2½¢ stamps then in use were surcharged with the new values.

You might think that the stamps shown in Figure 1 are identical. That is not the case.

Surcharges and overprints are subject to the same sorts of printing quirks, errors, flaws and varieties as stamps without overprints.

The two New Zealand surcharges in Figure 1 have varieties in the bars that obliterate the old value on the lower-right corners of the stamps. The left stamp, which was surcharged by Harrison and Sons in England, has wider bars than the stamp on the right that was surcharged locally in New Zealand.

This subtle difference won both stamps Scott catalog listings, as New Zealand Scott 480 and 480a, respectively.

This stamp was surcharged in 1921 to relieve a shortage of 2p stamps. A quantity of overstocked higher values was surcharged with the value that was in shortest supply.

Stamps can also be surcharged for charitable purposes. Figure 3 shows a 25¢ definitive stamp of Cook Islands, issued in 1967, that was surcharged in 1968 as a semipostal stamp, Scott B3, with an added 5¢ charge to raise money for hurricane victims.

Overprints can take many forms and serve many purposes. Figure 4 shows two stamps, a Papua 6d airmail stamp issued in 1930, Scott C3, and a Cook Islands 5/– airmail stamp, Scott C7, issued in 1966. Both stamps were converted from ordinary definitive stamps to serve as airmail stamps by the addition of overprints.

Figure 5 shows a 10¢ Orange Clownfish stamp of Tuvalu overprinted "OFFICIAL" in 1981, making it an Official stamp, Scott O7, for use by government departments for official correspondence.

Figure 6 illustrates a 2½p Bird of Paradise stamp of Papua New Guinea overprinted "POSTAL CHARGES" and surcharged 3/–, turning it into a 3/– postage due stamp, Scott J5.

Three very interesting stamps from North Borneo are displayed in Figure 7. The 4¢ Proboscis Monkey stamp on the left, Scott 196, was first issued as part of a pictorial definitive series of 1939.

The stamp in the center of Figure 7, Scott 211, bears a "BMA" overprint from late 1945. The initials stand for "British Military Administration" and reflect the interim British military government after North Borneo's liberation from Japanese occupation at the end of World War II.

In 1947, the pictorial definitives, of which the 4¢ Proboscis Monkey stamp was a part, were again overprinted when North Borneo became a British crown colony.

Part of the overprint obliterated the "The State of" and the "British Protectorate" inscriptions from the stamp.

The other part of the overprint added a royal cypher "GR" (George Rex), indicative of King George VI. This stamp, Scott 226, is shown on the right in Figure 7.

As the stamps shown in Figure 7 demonstrate, one reason stamps are overprinted is to signify a political change in the country of issue.

Three more such examples are shown in Figure 8.

Shown at top left is a stamp from the Kingdom of Hawaii, first issued in 1882.

In 1893, a coup overthrew the monarchy, imprisoned Hawaii's Queen Liliuokalani, and established a provisional government led by Sanford Dole of the Dole pineapple fame.

This 1¢ Princess Likelike stamp, Scott 55, and other Hawaiian postage stamps were overprinted "Provisional Govt. 1893" to recognize the new government.

The Australian stamp shown at the upper right of Figure 8, a ½d orange Kangaroo, was overprinted for use by Australian troops occupying Japan after WWII to become Scott M1.

The "B.C.O.F." stands for British Commonwealth Occupation Force, of which Australia was a key participant.

The Gilbert Islands stamp shown at the bottom of Figure 8 indicates one of the steps a nation might take toward independence.

In 1979 the Gilbert Islands became independent and were renamed Kiribati.

The overprinted 4¢ Fishermen Casting Nets stamp illustrated, Scott 256, shows a 1976 overprint that obliterates the words "Gilbert & Ellice Islands" at the top and inserts "The Gilbert Islands" at the bottom.

Overprints are sometimes added to stamps from one country for use in another country. Four such stamps are illustrated in Figure 9.

At the top left is a Fijian 1/– King Edward VII stamp overprinted for the British component of the Anglo-French New Hebrides service, Scott 16.

The British 1d King Edward VIII stamp shown at top right was overprinted for use in the Tangier international zone, to become Great Britain-Offices in Morocco Scott 512.

Shown at bottom left in Figure 9 is a New Zealand 2/6d postal-fiscal stamp, intended for both postal use and revenue use.

These stamps were used in former German colonies of New Guinea, Nauru and other nearby islands occupied by Australia in WWI.

Stamps may also be overprinted for commemorative purposes. The United States overprinted a 2¢ carmine George Washington definitive in 1928 with the words "MOLLY PITCHER" to commemorate the 150th anniversary of the Battle of Monmouth.

The overprinted stamp is Scott 646, shown in Figure 10.

Molly Pitcher is a name acquired by Mary Hays, who assisted Continental soldiers in the Revolutionary War Battle of Monmouth (New Jersey), by dodging bullets to bring them pitchers of cool water.

When Mary's husband, William, fell in battle, she took the ramrod from his hands and stepped into his place on the battlefield.

Figure 11 shows two more commemorative overprints. The 1d stamp on the left, Scott 53, was overprinted by Tonga in 1899 to commemorate the royal wedding of Tonga's King George Taufa'ahau II to Lavinia — the "T" and "L" in the overprint.

Surcharges and overprints are prone to forgery because it is less trouble to apply a bogus overprint to a genuine stamp than it is to produce an entirely counterfeit stamp.

Before spending a lot of money for a valuable overprinted stamp, it is wise to acquire a certificate of genuineness from a recognized expertization service.