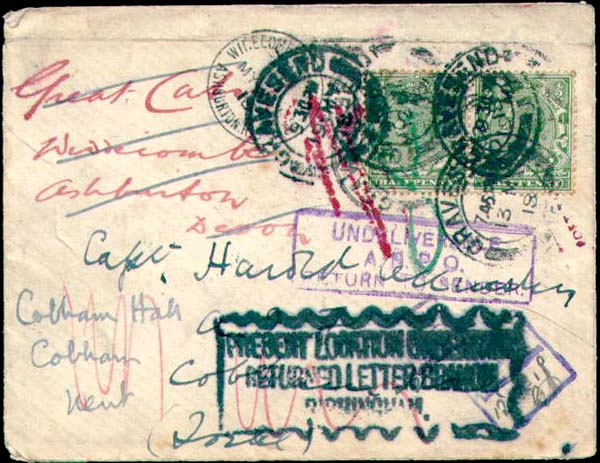 A well-traveled cover bearing a wide variety of postmarks. How many postmarks do you count on this cover? There are more postmarks on the back. Click on image to enlarge. 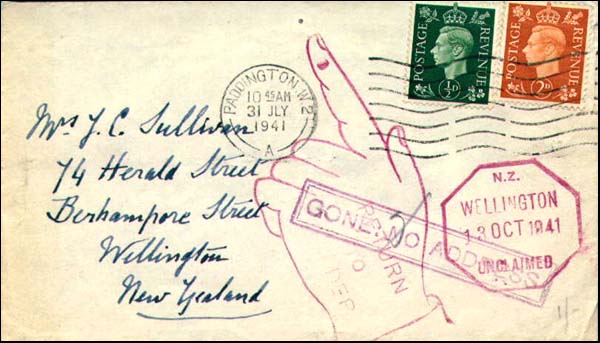 Postmarks can be instructional or ancillary markings applied by the post office, such as the return-to-sender pointing hand, the boxed "GONE: NO ADDRESS" marking, and the octagonal Unclaimed mark, all from New Zealand. Click on image to enlarge. 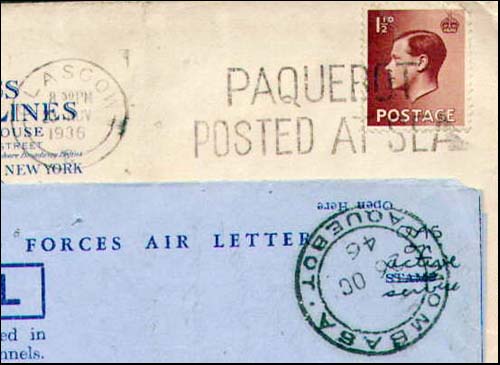 Photographically cropped covers showing paquebot postmarks indicating that these letters were posted on board ships: from Glasgow, Scotland, above; from Mombasa, Kenya's main seaport, below. Click on image to enlarge.

Three bull's-eye cancels on Australian stamps: a registered mail cancel from Hobart, Tasmania; a bridge type cancel from Bendigo, Victoria; and a railroad TPO cancel. Click on image to enlarge. 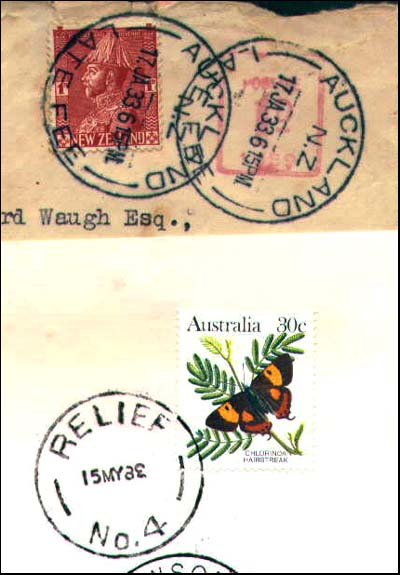 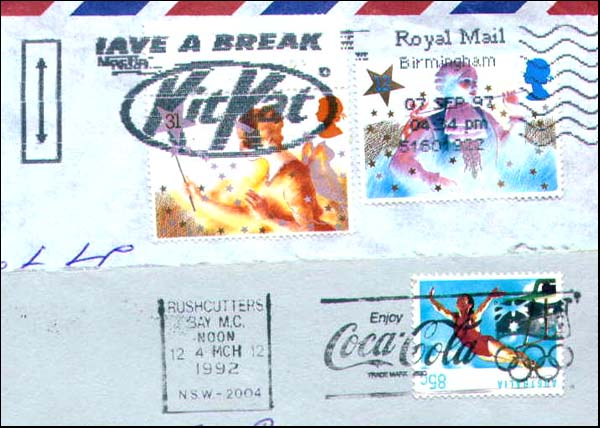 This installment of Refresher Course continues the discussion of collecting postmarks and cancels begun in the April 1 Linn's. To reprise, a cancel is the marking that strikes the stamp, defacing it and invalidating it for further postal use. A postmark is an informational marking applied to a letter or parcel by a post office. Most often the word is used to refer to the marking that carries the place, date and time of mailing.

In more recent years, many postal administrations have found postmarks to be a lucrative source of revenue in the form of saleable advertising space. Examples of advertising slogans for Kit Kat candy bars and Coca-Cola soft drinks incorporated into postmarks of Great Britain and Australia are printed on the covers shown graphically cropped in Figure 1. Although shown here cropped, these items and others pictured in this column are usually collected as entire covers or cards. Both companies paid fees to the respective postal system to get their names in the markings.

Figure 2 shows two instructional postmarks struck on graphically cropped covers. At the top is a late fee postmark from New Zealand. A late fee is a special handling charge added to post a letter after normal post office operating hours or for delivering letters to a ship or a train after the regular mail has been dispatched.

In New Zealand and other countries it was possible to pay a special handling charge to have a letter dispatched on the same day even if a post office had closed the outgoing mail for the day. Such letters were canceled with a late fee postmark.

Postmarks can also be collected on stamps that are off cover. Figure 3 shows three Australian stamps bearing three different types of postmarks that cancel the stamps. The stamp on the left bears a postmark used on registered letters from Hobart, Tasmania. It is nearly perfectly centered on the stamp. When that happens the cancel is said to be a bull's-eye (think of archery or darts). Such stamps are also said to be "socked on the nose" by their cancels.

The center stamp in Figure 3 bears a postmark of Bendigo, Victoria. At first glance this postmark looks like many other ordinary circular datestamps (abbreviated CDS), but it is not. If you look closely, it differs from the Hobart postmark because the date information in the center is boxed in. This box forms a bridge between the two sides of the circle, hence this style of cancel is known as a "bridge type" CDS.

The stamp shown on the right in Figure 3 bears a partial strike of a cancel. The key element of the postmark is the "T.P.O." at the top. This stands for traveling post office, meaning the stamp was postmarked on a train that had a post office aboard.

Maritime postmarks are another fascinating area to collect. These indicate usage aboard ship, and they can take many forms. Although only a few vessels, mostly large passenger liners, had sea post offices, almost every vessel is liable to have carried mail at certain times.

Sea-going mail may originate with passengers, or it may have been put aboard at a port of call. The vessel that carries this mail is paid a fee in addition to regular postal fees assessed to the letter. The mail is sent ashore at the next port with postal facilities where it is postmarked "paquebot" (French for packet boat) or other similar marking and enters in the regular mail system.

The top cover was postmarked in Glasgow, Scotland, with a slogan cancel reading "POSTED AT SEA." The armed forces air letter postal stationery piece at the bottom of Figure 4 bears a double-ring "MOMBASA PAQUEBOT" cancel from Kenya's main seaport.

Broadening the meaning of postmark to include any type of marking applied by a post office can include a seemingly limitless variety of instructional markings. These include misdirected and redirected markings, transit marks, registration markings, censorship markings, route-agent markings and marks relating to different classes of mail.

Figure 5 shows a cover sent from Great Britain to New Zealand in 1941. Along the way it picked up a Paddington, England, postmark, as well as a "RETURN TO SENDER" pointing hand, a boxed "GONE: NO ADDRESS" marking, and an octagonal marking applied in Wellington, New Zealand, indicating the letter was unclaimed.

Figure 6 shows a well-traveled cover that picked up an even wider variety of postmarks. Such covers may not be beautiful in appearance, but they test the tenacity of a collector who wishes to unravel the stories behind all of the markings.

Postmarks and cancels are a lot of fun to collect and can be very challenging. Finding postmarks from small or short-lived post offices, for example, can be quite difficult.

Postmark collections can be formed from your hometown, county, or state; from a particular city; from a specific time period; or by type. This article barely scratches the surface of the many byways of postmark collecting.