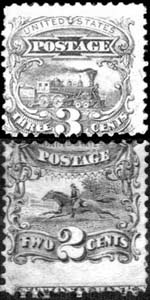 The tiny scrape on the face of this stamp might first appear to be a printing freak, but it was more likely caused by rough handling.

The nick in this 1893 Columbian automatically renders it a space filler. 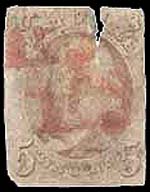 This U.S. Scott 1 is worth a tiny fraction of its catalog value because of severe tearing and fading.

The brown stains shown on this stamp were likely caused by poor storage and are fairly common for stamps of this era.

The stamp in this illustration is severely creased, but even small creases in a stamp will reduce it to space-filler status.

The thin, indicated by the arrow in this illustration, cannot be seen from the front of the stamp, but such damage still severely lessens the market value of this stamp.

This 1869 Shield and Eagle stamp has a catalog value of $140 in used condition. Other condition factors, however, render it considerably less valuable.
Previous
Next

Armed with a want list, complete with current catalog values, beginner collectors might believe that they are prepared to make a stamp purchase. However, in the face of a slick sales pitch or exciting Internet auction action, it can be easy to overlook certain aspects of a stamp's condition in considering its value.

Almost without exception, catalog value applies only to well-centered, fresh, clean, faultless stamp examples. "You get what you pay for" is a popular expression in the stamp hobby. What might seem to be a bargain could end up being an overpriced space filler. That is why a common piece of advice given to new collectors is to buy the best examples of a desired stamp that they can afford.

Figure 1 shows a used United States 10¢ Shield and Eagle stamp of 1869. This stamp clearly is not worth its 2003 Scott catalog value of $140 in used condition. The cancel on this stamp is so heavy that it almost obliterates the stamp design. The stamp is badly misperforated as well.

This stamp is known as a space filler. The name means just as it sounds — a stamp to fill a space in an album until a better example can be found. Usually, space fillers are damaged examples of more expensive stamps.

Most collectors of used stamps seek those that have been lightly canceled. Stamps that are heavily canceled because of overinking of the cancellation device or repeated applications to the stamps usually are of little value. Such stamps are sometimes said to be killer-canceled. Fancy cancels, such as that on the Figure 1 stamp, are desirable but not usually if they also obliterate the stamp.

Thins are damaged portions of a stamp where the paper is thinner than the rest of the stamp. These are usually caused by the removal of a hinge or by the stamp becoming partially stuck to another surface and losing a bit of its paper when the hinge was pulled away.

Creases are the traces of any folds in a stamp, no matter how minor they might appear. Some creases are obvious on the face of the stamp, but others might only be visible from the back.

Some creases in stamps can only be detected with the aid of watermark fluid, high magnification, or special equipment. Figure 3 shows a severely creased stamp. The crease is accentuated further in the illustration by the use of side lighting. Even minor creases will relegate a stamp to space-filler status.

Stains, often found on classic stamps, usually are caused by storage in high humidity and heat. The most common stains are the brown patches that appear on stamps that were not properly stored at some point in their existence. This type of stain is shown on the U.S. 10¢ Special Delivery stamp illustrated in Figure 4. The stains are indicated by arrows in the illustration.

Stamps that are stained, to whatever extent, are generally considered to be space fillers. Stamps that are otherwise discolored or faded are similarly viewed as space fillers, including color changlings resulting from exposure to light or chemicals.

Torn or nicked stamps are considered to be space fillers as well. Some tears in stamps can barely, if at all, be detected from the front, but even a minute tear is a big consideration in terms of the stamp's value. Figure 5 shows a seriously torn U.S. Scott 1. Obviously, this stamp is not worth its $600 catalog value, as listed in the 2003 Scott catalog.

Most stamp tears are not this obvious and might even require good light and magnification to detect. A nicked stamp actually has had some amount of material removed from it, as can be seen by the stamp shown in Figure 6. This 1893 U.S. 4¢ Columbian Exposition stamp in unused condition has a 2003 Scott catalog value of $87.50. This example could command only a small fraction of that price. The lower-left corner of the Figure 5 stamp also is nicked.

Scrapes can sometimes appear to be printing errors. The stamp shown in Figure 7 has a small scrape near the bottom left. Such a scrape might, at first glance, appear to be a printing variety, but strong magnification reveals the mark on this stamp to be a small scrape, possibly the result of rough handling with stamp tongs.

A tiny scrape such as this on the face of the stamp is barely noticeable to the casual observer, but most stamp collectors would consider a stamp flawed in this manner to be a space filler. Of course, the Figure 7 stamp includes a number of other flaws, such as a nick at the top and blunted perforations in various locations. This mint, no-gum stamp could not sell for anywhere near its $140 catalog value.

Poor centering also has a significant effect on a stamp's value, even if it is otherwise undamaged. Ideally, the stamp design should be centered within the edges of the stamp, with four margins of equal sizes. Catalog values are usually based on very fine centering.

The farther off center a stamp's vignette or printed image is in relation to its edges, the less it is worth. Both stamps shown in Figure 8 are poorly centered. The top stamp, a U.S. 3¢ 1869 definitive, Scott 114, obviously has a poorly centered vignette. The bottom stamp, the 2¢-value from the same issue, Scott 113, is similarly badly centered.

This stamp, however, is a margin single. Part of the printer's imprint appears at the bottom edge of the stamp. Some unwitting sellers might offer this stamp as a production freak worth more than catalog value. Such sellers might use terms such as "freak," "major color shift," "rare miscut," or similar terms to describe a badly centered stamp in order to make it appear more desirable and valuable.

On the other hand, some buyers might consider the 2¢ stamp to be a premium item because it shows part of the imprint. As one of very few of the 1869 series with any indication of its printer, the 2¢ stamp does make an interesting, even desirable, collectible.

Some might say that space fillers are good only for filling a space in your collection until something better comes along. For many collectors, though, stamps classified as space fillers might be their only opportunity to own scarce or expensive stamps.

The question is: how much should you pay for a space filler? Some would say that for very expensive, hard-to-find stamps, perhaps 10 percent of catalog value is fair. Others argue that only 5 percent or so of catalog value is warranted. The actual pricing of space fillers might vary greatly, depending on the seller's desire to sell the stamp, the buyer's desire to own the stamp, the extent of the damage and the rarity of the issue.

The most important lesson of this Refresher Course is to carefully examine the stamps you are considering for purchase. Whether or not you choose to buy a less-than-perfect stamp for your collection is up to you, but be certain that you will not be overpaying for it.

Attitudes vary widely among stamp collectors on this subject, as they do on practically every subject. Some collectors simply do not care if a stamp looks bad under high magnification or from the back. Others would refuse to purchase a stamp that is perfect in every way save one short perforation.

As in any other aspect of stamp collecting, what you collect in terms of condition is entirely up to you.